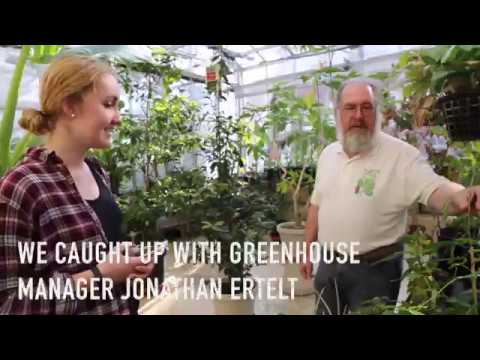 Next time you walk past Stevenson Center, look up to the top of Stevenson Building Two. You’ll catch a glimpse of Vanderbilt’s greenhouses, a small green oasis barely visible from the ground.

Vanderbilt’s greenhouses are used for research by faculty from the Department of Biological Sciences for several courses and by students who come to visit.

If you visit the greenhouses, you will be greeted by greenhouse manager Jonathan Ertelt.

Ertelt has worked in botany for years, from work at Cheekwood Gardens in Nashville to the University of North Carolina at Charlotte. He came to Vanderbilt 21 years ago to get a Masters in Education and used his work-study funding to work in the greenhouses for a year. Halfway into that time period, Ertelt convinced administrators to create the part-time position of Greenhouse Manager so that he could continue to work there and take care of the greenhouses.

After Ertelt finished his Masters degree, his position as Greenhouse Manager became a full-time job, and he has been working in the greenhouses since then.

Ertelt encourages students to explore the greenhouses on any weekday between 9 a.m. and 5p.m. to learn more about what goes on inside of it.

“With every plant, there is something about it: how it grows, why it grows, what pollinates it. This is why this is a valuable place for students to come to,” Ertelt said.

The Vanderbilt campus has had greenhouses since the 1930s. They were connected to the left side of Buttrick Hall before an addition was added to that building in place of the greenhouses.

When the Department of Biological Sciences was moved to Stevenson Center, the greenhouses were built on top of Stevenson Building Two. There are seven rooms within the greenhouses, four of which are open to students.

Various faculty members have used the greenhouse to conduct their research since they were built, but Ertelt says that now the greenhouses are mainly used by students.

Research at the greenhouses

Dr. Patrick Abbot, Associate Professor of Biological Sciences, uses the greenhouses to conduct research as part of two of his current projects.

One project uses wild carrots to study how genetically modified genes travel through wild plant populations. Specifically, the Abbot Lab is studying how genes can be spread through paternal leakage. Paternal leakage is the mechanism by which paternal lineage can contribute mitochondria to the next generation, although only maternal genes are thought to be passed through mitochondria.

“If (paternal leakage) is common in plants, then that strategy for limiting the risk of spreading GMO modifications into wild populations is actually higher than we thought,” Abbot said, “So we’re looking at the rate of paternal leakage in carrots and the risk of gene escape into wild carrot.”

With the other project, Abbot and his team are researching how aphids ingest and sequester defensive chemicals like cardenolides, a cardiac arrest-inducing chemical, from the milkweed plant.

“We’re interested in studying the mechanisms – what are the molecular and physiological mechanisms by which they are actually able to ingest these cardenolides, and then deposit them and store them in their body for their own defense,” Abbot said.

Victoria Scott, a junior majoring in neuroscience, works as a lab assistant in the Abbot Lab. Scott worked in the greenhouse at George Washington University before transferring to Vanderbilt for her sophomore year of college.

“When I transferred (to Vanderbilt), I knew they would have greenhouses here, and I really liked working in greenhouses,” Scott said. “So I started working like three hours a week or so and I developed a relationship with Jonathan.”

When Dr. Abbot needed a new lab assistant, Ertelt recommended Scott for the position. As a lab assistant, Scott works in the lab for six to ten hours a week. She has been working on the wild carrot project since Dec of 2015. Scott worked full-time in the lab last summer and will do the same this summer.

“For me, it’s a place that I can go into, and if I’m having a bad day, I’m stressed out- I can go up there, I talk to Jonathan for thirty minutes, I go in the rooms and just check out the flowers, and it’s a much better day,” Scott said, “Everyone can do that, but no one does.”

Volunteering at the greenhouses

First-year Grace Adcox grew up in Nashville and spent a lot of time on the Vanderbilt campus when she was younger. She knew that there were greenhouses on top of Stevenson but didn’t visit them until her she took biology during her first semester at Vanderbilt.

“There was a particular day in bio lab actually that we were doing plant science and they mentioned the greenhouse in the assignment,” Adcox said. “And I was like, ‘You know what, today is the day I’m walking up there.’”

During her first visit, Adcox met Ertelt and talked about the prospect of volunteering in the greenhouse. Now, Adcox volunteers for an hour and a half once per week, and often brings friends with her to show them the greenhouse.

“I’ll go up multiple times a week- I’m up there about two times a week,” Adcox said. “I usually will bring someone else along the second time I go up and show them around.”

Adcox’s favorite room is the cacti, succulent and caudiciform room at the end of the greenhouse hallway.

“It has not only the most beautiful view of campus, overlooking Central Library and main campus, but also it’s the nicest climate in that room and the plants are all beautiful,” Adcox said.

Photos and videos by Claire Barnett