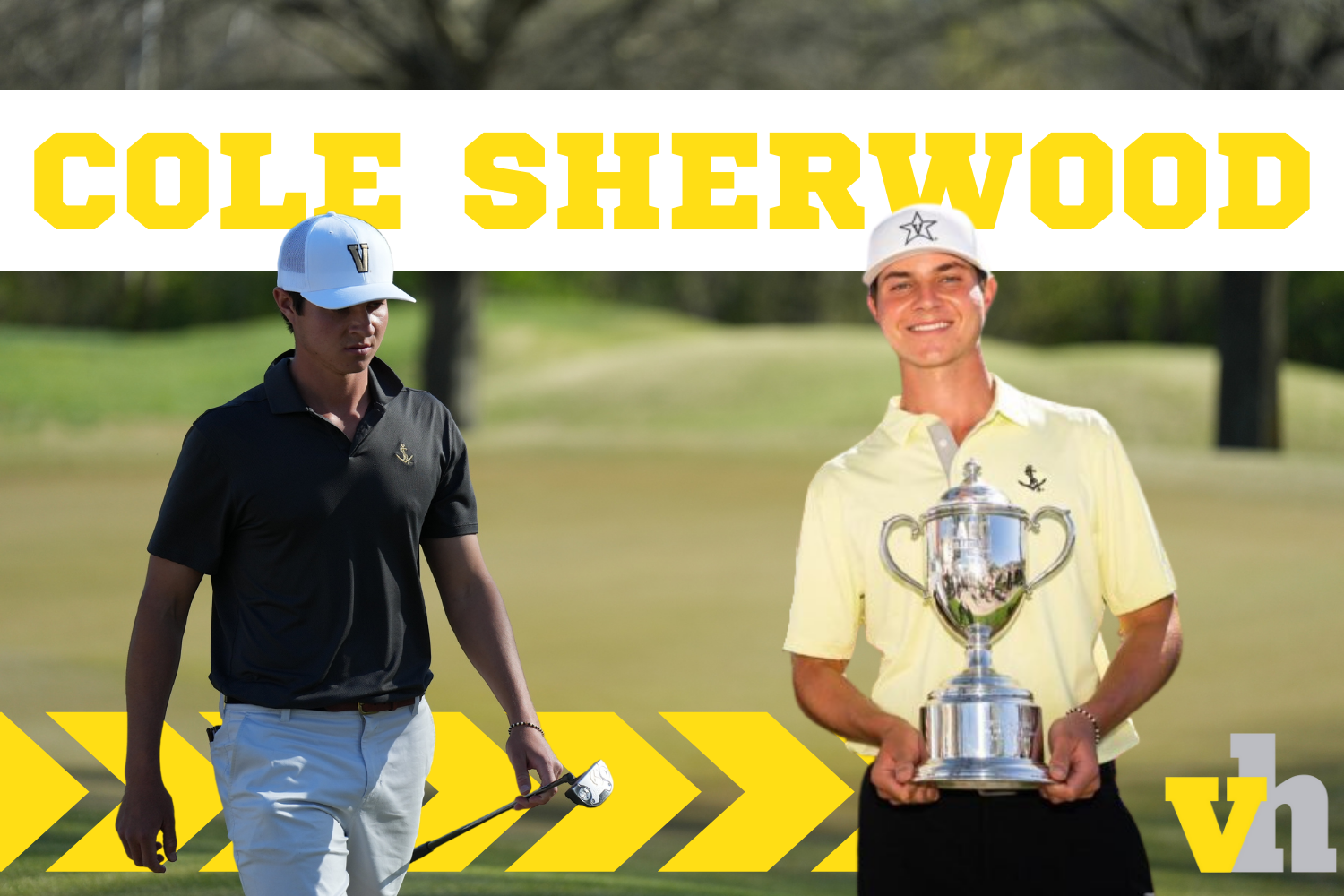 Sophomore Cole Sherwood has already won two individual tournaments this spring and is poised to be a catalyst in Vanderbilt’s pursuit of postseason glory.

When sophomore Cole Sherwood moved to the 17th hole of his final round in the Cabo Collegiate Invitational in early March, he hadn’t even digested his 16th hole. Just moments before his walk to the 17th tee, he nearly holed out a shot from the fairway for an albatross on a 555-yard par 5 at the Cove Club in Los Cabos, Mexico.

He was forced to settle for a tap-in eagle—his third big-bird of the day—but was hyper-focused on finishing his round strong to help the Vanderbilt Commodores in their pursuit of a pivotal tournament win.

“I just kind of looked up after walking off my 16th hole, and I was like, ‘What just happened?’” Sherwood told The Hustler.

Two holes later, the sophomore made history. With his tap-in eagle, he pushed himself to 10 under par for the day and 17 under par for the 54-hole tournament. After pars on his final two holes, Sherwood claimed the tournament individual championship, set a Vanderbilt 18-hole scoring record with a final-round 61 and broke Vanderbilt legend Brandt Snedeker’s 2002 54-hole scoring record of 198 with a 196.

But what really mattered to Sherwood was that his 61 helped the Commodores move into first place in the team portion of the championship leading Vanderbilt to beat Texas Tech, Florida State, Arkansas and others in Mexico. Plus, a 61 wasn’t even his personal best. He shot a 60 back at his home course, Riverplace Country Club, in Austin.

“I don’t look at individual records because our culture is for the team to do well,” Sherwood said. “We come here to win team championships, and I’m just trying to do whatever I can to help our team.”

A championship was exactly what the Commodores took back across the border when they returned from Los Cabos, their second consecutive title after winning The Prestige on Feb. 23.

Fast forward about a month to April 3, and the results were just about the same for the sophomore and Vanderbilt. With a home-course advantage at the Vanderbilt Legends Club, Sherwood and his teammates claimed their third tournament victory in four tries this spring in the annual Mason Rudolph Championship. Sherwood wasn’t able to set any new records that weekend, but he tied his 54-hole record of 196 over the three days of action and finished with the individual tournament trophy, beating everyone in the field by at least four strokes. He was honored with his second SEC Golfer of the Week award this spring following the performance.

“I wish I had the answer,” Sherwood said when asked what has fueled his recent play. “I just kind of went on cruise control [in Cabo] and never really thought about it.”

He may not be able to pinpoint what exactly has made his sophomore spring so electric, but the results are certainly astounding. In 12 tournament rounds, he has shot under 70 eight times and leads a talented Commodore team that is currently ranked No. 3 in the country in scoring average at 69.9 strokes per round.

“I really think it just comes down to maturing—knowing how to use my strengths on the golf course with course management,” Sherwood said. “[Another] big part of it is that I just have so much trust in my teammates that they’re going to play well [so] I can go out there feeling really loose.”

Sherwood’s faith in his teammates is not misplaced—the Commodores’ top three of Reid Davenport, Gordon Sargent and Sherwood have wracked up 11 top-10 finishes this spring. Head coach Scott Limbaugh’s 2022 squad may be one of the deepest in recent memory, and that’s just how Sherwood likes it.

“This is definitely the deepest team I think Vanderbilt has had in a while, where we have really nine guys that can travel for us,” Sherwood said. “You always kind of have that uncertainty—you never feel like you’re always guaranteed to be in the lineup, so everyone feels like they have to play great, practice hard every week to earn their spot.”

Not all that long ago, Sherwood was on the wrong end of Vanderbilt’s incredible depth and internal pre-tournament qualifiers. The sophomore didn’t make his Vanderbilt debut until February 2021 at the Gator Invitational.

In the fall, he said he was “second-to-last” on the team.

But as the then-freshman settled into college life, he began gleaning wisdom on how to practice properly from a teammate: then-fifth-year senior John Augenstein, one of the most decorated players in Vanderbilt golf history. Augenstein elected to use his extra year on West End to continue working toward a professional career, and Sherwood was able to observe a future pro firsthand.

When Augenstein elected to turn pro after his fall 2020 semester, a spot opened up on the Commodores’ starting lineup and Sherwood rose to the occasion and finished the season with plenty of positive momentum.

After notching a T-35 at the Gator Invitational in his debut, he rounded out his spring with three top-15 finishes, none more significant than a tie for fifth in the stroke play portion of the SEC Championship. Sherwood tallied six birdies to just eight bogeys over three days at the notoriously tough Sea Island Golf Club en route to his first career top-five finish. He later went 2-1 in the match play portion of the championship, helping Vanderbilt secure its second all-time league title.

“I had [assistant coach Gator Todd] walking with me every shot I hit that week. He really just took the role of clearing up my head,” Sherwood said. “I was playing with guys who were a lot better than me. I wasn’t intimidated, but it was kind of eye opening because I never played tournaments against some of those top guys before… I didn’t think I did anything special that week, but then I look back and see that the lack of mistakes I made went a long way to helping our team.” 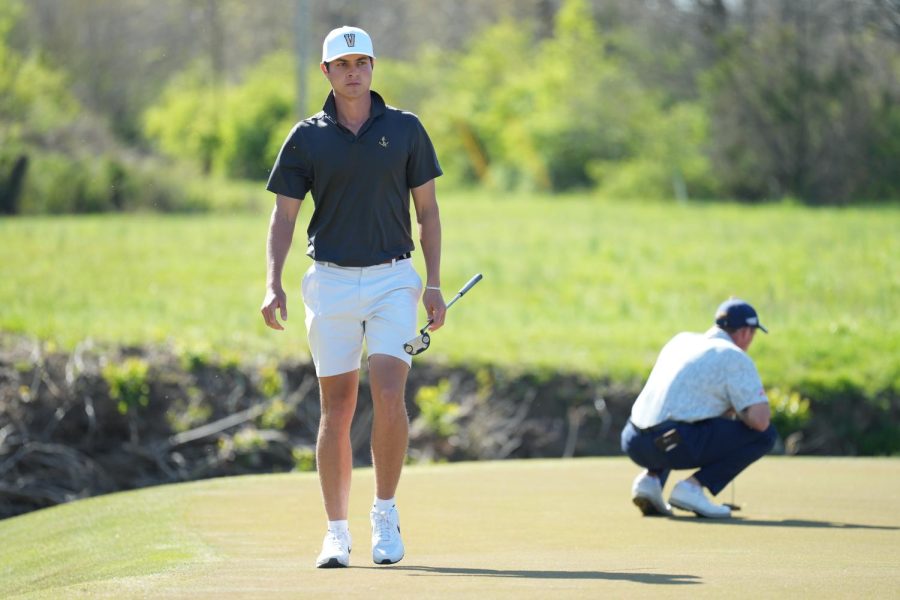 Sherwood finished out his freshman season with a top-15 finish at the NCAA Kingston Regional which Vanderbilt went on to win before tying for 34th in stroke play at the NCAA Championship. He concluded his freshman year with a 71.7 scoring average across 25 rounds and turned his sights to improving his game.

Shaving strokes from a 71.7 scoring average can be difficult, but Sherwood has tapped into Vanderbilt men’s golf’s family of alumni to help him improve. Former Commodore Hunter Stewart is now helping PGA Tour professionals improve their games via advanced analytics, and he has also been helping out Limbaugh and his alma mater.

“It’s just been really cool to talk to [Stewart] because we get a realistic look of where to gain shots,” Sherwood said.

For example, Stewart has helped him analyze his proximity to the hole on approach shots from the rough. Sherwood explained that, before diving into the analytics with Stewart, he was aiming too close to the hole out of the rough. Now, he has become more conservative when hitting from the tall grass.

“Out of the rough, my proximity to the hole was 40 feet because I was being too aggressive,” Sherwood said. “When you look at tour average, if you make par from the rough with a wedge, you’re gaining shots.”

Couple this type of analysis with some work on his short game and a bit more experience, and Sherwood has dropped his scoring average by almost two strokes from his first year on West End. He has appeared in seven of Vanderbilt’s eight tournaments in 2021-22 and has made quite the splash this spring with his pair of tournament wins.

Despite his exponential improvement, record-breaking performances and week-to-week steadiness, with a team as loaded as Vanderbilt’s, the Texas native said he never takes his spot in the starting lineup for granted and always prioritizes the team. It’s that type of determination that may just propel the Commodores to new heights as they hit the postseason this April.