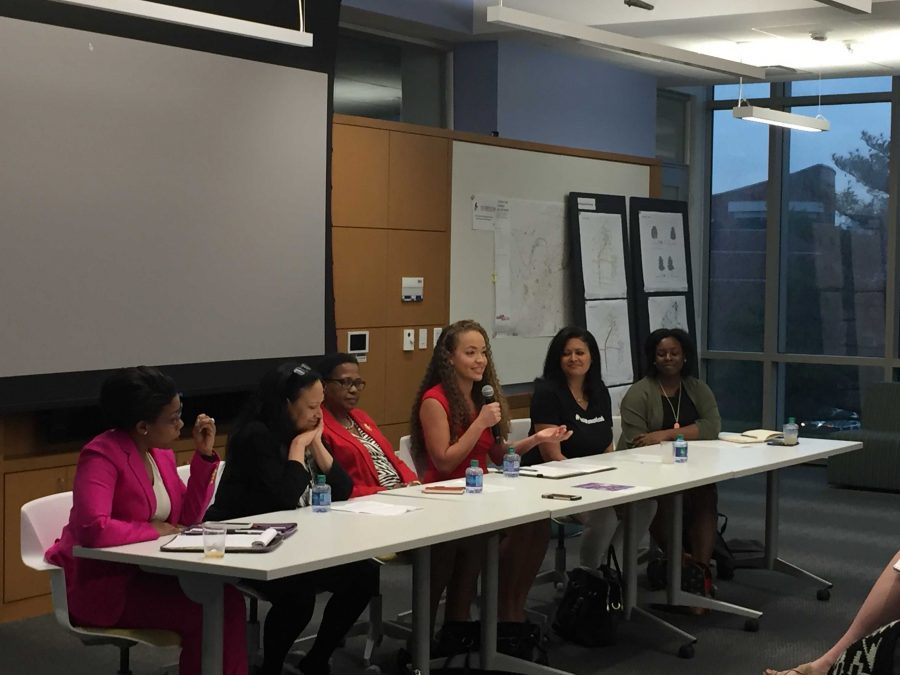 Last Tuesday, a group of professional women and students gathered in the Wondry for a conversation on black women and innovation. The panel, titled “Women Handling Business,” was organized by Queen Stevenson, the News and Communications intern for Dr. Ifeoma Nwankwo, Associate Provost for Strategic Initiatives and Partnerships. One of the office’s goals is to redefine innovation.

“She says that if you are a black woman who’s lived in the South for a number of years, and you’re still able to live, laugh, and love–that’s innovation,” Stevenson said. “We have something to learn from you; you flourished in an environment that was structured against your survival. So she wanted to bring black women together in various industries who had innovated in their fields and redefined what innovation is traditionally seen as: a bunch of guys creating an app in Silicon Valley.”

The overarching theme for the panel was how the individuals invited used innovation and creativity to accomplish their entrepreneurial goals. The six panelists came from a variety of different fields and experiences. They included Kia Jarmon, founder of MEPR Agency in Nashville; Kristina Ellis, author of How to Graduate Debt Free and Confessions of a Scholarship Winner; Krystal Clark, Director of Student Leadership Development at Vanderbilt; Daynise Joseph, Community Impact initiative leader for Google Fiber in Nashville; Alice Randall, award winning songwriter and novelist and writer in residence at Vanderbilt; and Sandra Long Weaver, editorial director at the Tennessee Tribune.

“We invited the women we invited because they were proven leaders who have made innovative strides in their careers and had made space for other black women and individuals from other minority communities to do the same,” Stevenson said. “They confronted countless challenges– personal, professional, psychological, and more–as both black and woman. That’s innovation in itself, and it should be celebrated.”

Each panelist explored topics of work ethic, frustration and reinvention within her own field. The women gave various pieces of advice to the audience, such as maximizing your day, learning to be your own advocate and balancing business and altruism. Stevenson said that for her, the topic of frustration left a lasting impact.

“They talked about how their frustration – which they regard as valid and valuable – moved them toward something greater, whether that was leaving a place of work, asking for the salary they deserved, or creating a new opportunity,” Stevenson said. “Personally, as I’m in a season of life as a senior, I’m constantly confronted with my own frustration and life’s uncertainties and it was so refreshing and relieving to hear women who look like me, who have been in my shoes before, say they got through it and used it for something good.”

Turnout for the event was relatively low due to the rain, but the panelists took advantage of the small environment to share more intimate stories about their lives as “women handling business.” After the event, attendees spent time speaking one on one with panelists and the event organizers.

“We keep seeing that representation is vital, especially for black women, who have been told that our challenges, our complaints, our emotions, our experiences don’t matter, don’t carry enough weight,” Stevenson said. “One student said she cried and that this panel was what she needed, and that is so encouraging to hear as an organizer, and as a black woman.”