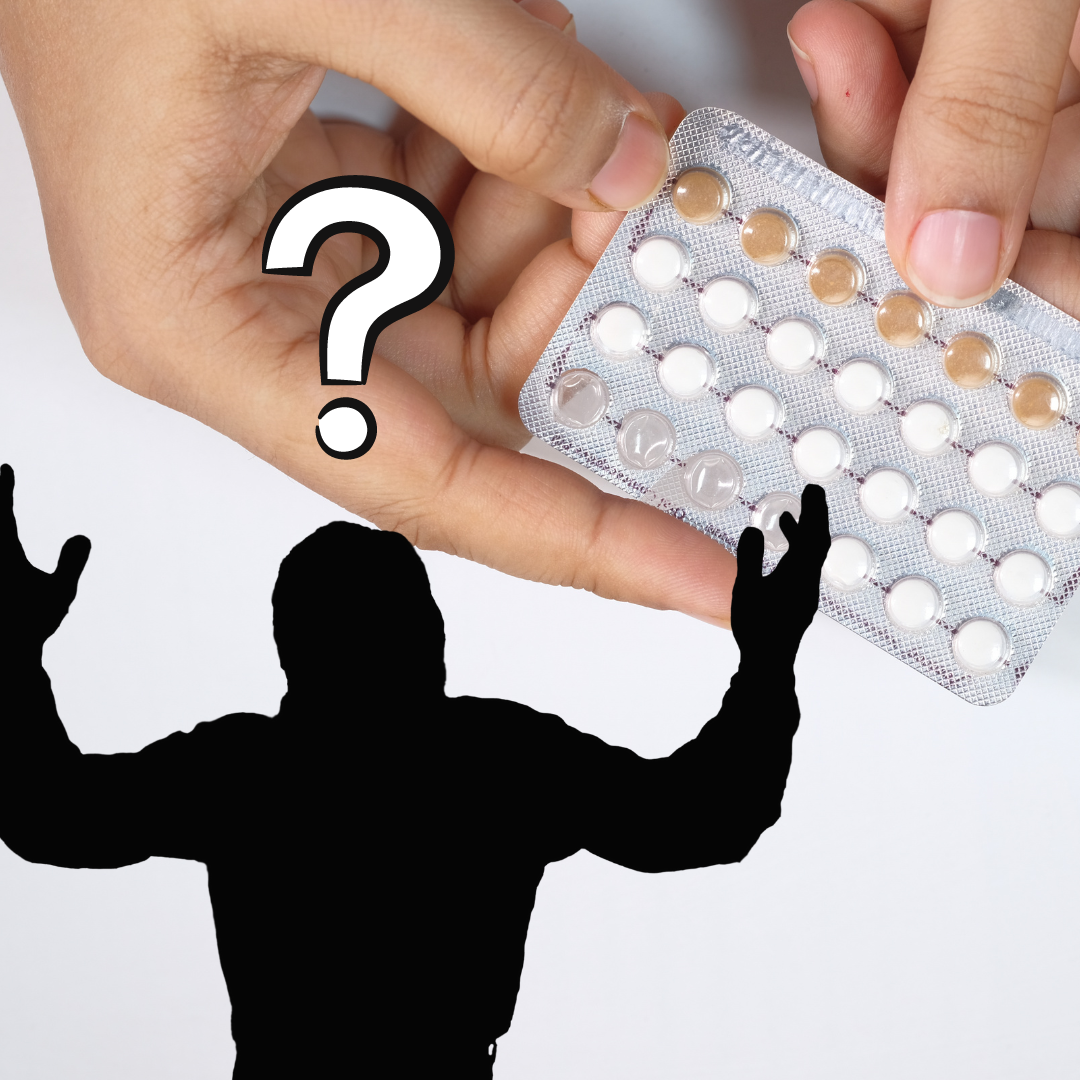 ZHAO: Men really should know how the pill works

When reproductive justice is on the line, learning the side effects of hormonal female birth control is only a small step to redress the reproductive gender bias against women.

Recently, I learned just how many side effects a birth control pill can have.

A few weeks ago as I was mindlessly scrolling through Tik Tok searching for the next quirky trend or shenanigan that my social-media-savvy peers are up to, I stumbled across a video by @squishxy in my feed captioned, “my roommate and I had our boyfriends read our birth control side effects.” It intrigued me—and it did not disappoint.

In the video, the creator and her roommate encouraged their boyfriends to each read the long list of side effects and complications of birth control usage that came with the packaging of their partners’ birth control pills. While the guys visibly displayed confusion and astoundment at the mishmash list of foreign-sounding medical conditions, their partners sat by the sidelines laughing uncontrollably.

“I don’t even know what them chemical signs even mean!” one boyfriend exclaimed.

“You’re gonna get a stroke?” the other boyfriend questioned, “WTF is angina pectoris?”

After a quick Google search, I learned that angina pectoris is a medical condition characterized by severe pains in the chest, neck, shoulders and arms caused by restricted blood flow to the heart. It is a potential side effect of birth control medications, especially those containing estrogen, like the pill. A quick Google search reveals that many women on the pill are concerned about blood clots and heart problems. When you type “angina pectoris” into Google, the suggested searches are all about the link to birth controls. Like me, the other commenters also found it rather hilarious.

But one particular comment provoked an intense thought within me.

“It’s funny, but it’s really not,” a user lamented.

This user’s comment is resounding. While we may chuckle at two men gawking over a manuscript as detailed as those god-forbidden documents a new patient must complete at a doctor’s office, in reality, it is a symptom of the modern-day form of gender roles. The humor in the video makes for good social media content but is also a clear and troubling warning: men and those without uteruses don’t necessarily understand what their partners put in their bodies when they take contraceptives. Given the hostile climate that surrounds reproductive rights currently, men’s obliviousness to the ramifications of birth control pills only fuels the injustices in sexual health and healthcare in the United States that disproportionately impact women. More specifically, men’s lack of knowledge in hormonal birth control—both in the home and in the Congressional chamber—is emblematic of a societal inclination that places women’s bodies as the object or the receiving end of sexual health responsibilities.

To get a sense of how the pill relegates women into the submissive role, let’s take the development of the medical breakthrough as an example. With the advent of the Civil Rights Movement, the feminist movement and other nationwide stances for broadband equality, the development of reliable hormonal birth control is often cast to the sidelines. However, its invention is a significant mile marker in the ways American society views relationships—and even gender norms.

Yes, the pill drastically revolutionized women’s lives, altering the way women in particular seek educational opportunities, find advancements in careers and begin families. However, an unintended consequence of the pill is the consignment of total responsibility on the user’s body when it comes to sexual health and responsibility. People who use hormonal birth control are required to alter their bodies and place themselves at increased risk of severe medical problems when in reality, the choice to have sex and the potential consequences should fall on all parties involved.

Even seemingly small side effects like mood changes or headaches can profoundly impact users. This is not to mention the pill’s impacts on emotion and mental health. When depression and even suicidal thoughts are not uncommon for side effects, it is difficult to wrap our minds around the question of how the pill even passed federal health regulations. The fact that many men like the boyfriends in the Tik Tok are unfamiliar with the side effects of the pill is only an inherent extension of the consequences of its invention.

Another factor is the historical hesitancy surrounding male birth control and even the lack of coverage of it. Textbooks and even everyday dialogue rarely—if ever—discuss the scientific development of a male hormonal pill. In fact, most are not aware of existing and ongoing research surrounding it.

In the early 1960s, scientists from the University of Oregon and the University of Washington accidentally formulated a drug that halts the production of sperm. Assigned the name “WIN 18446,” the pill was initially tested on prison inmates (of course, the ethics of this is a discussion for another day). After taking the pill for one year, researchers observed no adverse side effects in the inmates.

The only kicker, however, is that those who take WIN 18446 cannot consume it alongside alcohol. If liquor is consumed while the user is on the pill, it can induce severe vomiting.

So, my question is this: why do we find it acceptable for people who take the pill to bear the risks of stroke, heart attack and blood clots when the benefits of the pill are shared beyond just the woman’s body? Why is it that we cannot normalize quitting alcohol while on the pill?

Admittedly, the pill for men will probably never reach the total level of efficacy that is comparable to the traditional birth control pill. Scientifically, it is more difficult to inhibit the almost-ceaseless production of sperm, whereas a person with a uterus has a more controlled and cyclical production of eggs. However, this does not sideline the possibility of hormonal birth control for men. Countless studies and experiments have been conducted or are in the process of being conducted, which is an indication that a male solution to birth control can be a reality. It takes both funding and attitude. Funding is not an issue, given that the scientific community is eager to create a breakthrough in the field of medicine and own the patent for it. But the roadblock that is impeding development is the attitude that underpins the gender roles that are assigned to sexuality and sexual health.

In 2019, scientists revealed a drug named 11-beta-MNTDC, which they tentatively conclude is safe for men without any apparent side effects. However, scientists estimate it will take more than a decade to hit the markets. The reason? It all comes down to attitude.

Our attitudes are propelled by the hours we spend on social media (like Tik Tok), our complete immersion in popular culture and even the role of our government. For instance, the Affordable Care Act contains a contraceptive mandate, which requires all health plans to cover the costs of birth control—but only for women. These actions only exacerbate the stereotypes that have defined the sexual health landscape for so long.

Given the injustices of birth control that are consigned to people with uteruses, promoting a broader understanding of birth control side effects is crucial. Understanding how contraceptives, including other forms like IUDs and the patch, impact people’s bodies fosters respect and compassion on both sides of the aisle. Our tendency to rely solely on people with uteruses to prevent pregnancy is more serious than it looks; it is part of an impetus for a perpetual cycle of assuming that, because their body would be the one to carry a baby in the case of pregnancy, it should be their body that bears the cost of birth control. The first step to breaking that cycle is to be informed.

Unfortunately, obliviousness is an epidemic. While your significant other’s ignorance of the pill’s tediousness may make for funny social media content, our Supreme Court, our law enforcement and even our health care system embraces ignorance of truth and reality. It is no wonder that women feel overwhelmingly burdened with the health risks of hormonal contraception.

So yes, it is much bigger than a TikTok video that you can scroll past in a few seconds. Self-determination and individual right to one’s own body are at stake.

The Vanderbilt Hustler welcomes and encourages readers to engage with content and express opinions through the comments section on our website and social media platforms. However, The Hustler reserves the right to remove comments that violate the outlined policy. Comments which contain vulgarity, hate speech, personal attacks or appear to be spam or commercial promotion will be blocked or removed by The Hustler. The comments section, both on the website and social media, is moderated by the Editor in Chief.
All The Vanderbilt Hustler Picks Reader Picks Sort: Newest
Subscribe
Login
2 Comments
Newest
Oldest Most Voted
Inline Feedbacks
View all comments
A
Alexandra

About time. Thank you.

I’m so tired of being a Woman… but thank you for this article.