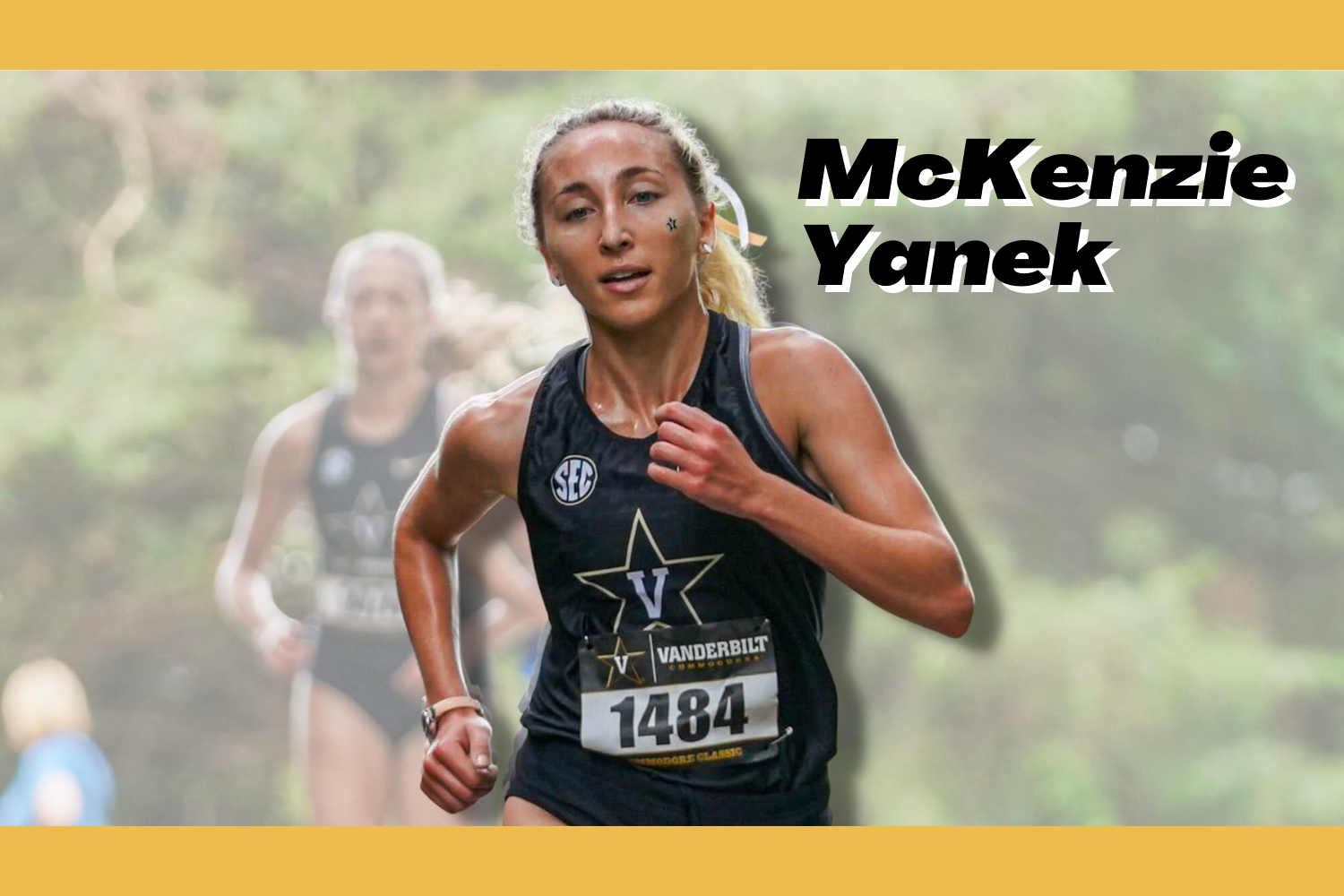 McKenzie Yanek looks ahead during the women’s 5K at the Commodore Classic, on Sept. 17, 2021. (Hustler Multimedia/Emery Little) (Emery Little)

McKenzie Yanek looks ahead during the women’s 5K at the Commodore Classic, on Sept. 17, 2021. (Hustler Multimedia/Emery Little)

‘I believe in myself’: The power of McKenzie Yanek’s mindful determination

Distance runner McKenzie Yanek’s commitment to herself has powered her through tough times to ultimately achieve success.

A young McKenzie Yanek looked defiantly to the top of a hill on her street. Inspired by her neighbors—standout high school runners whom she had seen sprint up the hill many times—the now-graduate decided to give running a shot as a bright-eyed fourth-grader. From the moment she felt the energy and discomfort course through her body, she was hooked.

“I really liked the feeling that I got from it [running],” Yanek said. “Pushing myself and seeing, when it hurt really bad, how much farther could you go. That’s something that’s stayed consistent throughout the whole time I’ve been running. I just like pushing myself.”

Yanek’s desire to test her limits and gain an advantage on her competition is relentless—she always wants to hit the ground running. Director of cross-country and track and field Althea Thomas has seen this drive present itself in races: At the 2021 Commodore Classic, Yanek established herself as one of the Commodores’ top long-distance runners with an extremely fast start and eventual second-place finish at the home cross-country meet.

“She’s just a very lively, very optimistic person,” Thomas said. “Very eager. Really just takes the bull by the horns, and you see that in how she competes. She likes to run from the front.”

Yanek’s unmatched drive and brilliant results, including winning the 2015 Iowa Girls High School Athletic Union 4A cross-country state championship, led her to the University of Alabama coming out of high school. She immediately excelled at Alabama, where she earned SEC All-Freshman Team honors in 2016. Yanek was poised to enjoy a fantastic career at Alabama—until a devastating setback struck.

After the 2016 cross-country season, Yanek developed a bone infection that required surgery. She was then given IV antibiotics for two months while she recovered.

In her return, Yanek performed well in the 2017 cross-country season and 2018 track season as a redshirt freshman, often finishing as the Tide’s top runner. But due to circumstances that included recurring injury resulting from rigorous mileage—80 to 85 miles per week—Yanek hit a roadblock during her time at Alabama.

She declined somewhat in her 2018-19 campaign and recognized that Alabama was no longer an environment conducive to her success. Finally, Yanek chose to transfer to the University of San Francisco and started there in the Fall 2019 semester.

Yanek’s mother, Toni, reflected on the internal conflict her daughter faced at the time.

Toni added that Yanek’s confidence was crucial to navigating the tough situation at Alabama.

“It was a tough couple of years right there before that transfer to USF, and I think she needed it,” Toni said. “She very smartly and wisely listened to herself and figured out what she needed, and maybe the change of scenery was what was the best decision for her at that time.”

Indeed, self-belief is the core of Yanek’s success. She identified it as her defining trait, and remarked that it strengthens her resolve during tough times.

“I’ve had a lot of big obstacles over the past few years, but I think that something that’s remained constant is that I believe in myself, that I can overcome the obstacles,” Yanek said. “That makes me more resilient and willing to dig deep when things get hard, to not let it stop me but to work harder to get past the challenge.”

In addition to her personal determination, Yanek is backed by the support of her family. Her father, Jeremy, and Toni are strongly devoted to attending her meets, having missed only two of Yanek’s races ever.

Yanek’s brother Nicholas brings an extra element to the table as her counterpart, as Nicholas also enjoyed high school success and went on to run three years at the University of Georgia. He and Yanek often scout the competition and discuss strategy before races.

In addition to running, the two developed a tight bond through the family’s many relocations—about 10 moves, according to the parents.

“They’ve been constantly a support group for one another, running or not running,” Jeremy said of the sibling duo. “I think they, almost by necessity, had to become each other’s support group. And obviously, that continues, even today.”

Yanek credits her family for providing a broader, more positive perspective on her running. Whenever she feels upset about disappointing times or races, they urge her to examine the bigger picture.

“My family’s always been a big support system for me,” she said. “They’re always there to remind me of how proud you should be of the work that you’ve put in, even if you may not see the results come to fruition the way that you want.”

Yanek will look to impart similarly valuable lessons on others following her time at Vanderbilt. She is in her first year of the Master of Education in Human Development Counseling program, on the school counseling track.

While Yanek currently works at St. Bernard Academy, an elementary and middle school, as an aftercare counselor, she is leaning toward working with high-school students post-graduation. In this setting, she will be more involved in helping kids plan their futures, and will be able to draw upon her wealth of experience, having now attended three different colleges. Still, Yanek appreciates the younger kids at St. Bernard for having an ever-present joy, which rubs off on her.

“They just seem so excited by the little things,” Yanek said. “When a three-year-old is so excited that he’s holding a pile of rocks…When you have so much stress going on with classes and running and things like that, to get to work with them makes you appreciate the smaller things.”

The smaller things. Getting back to the basics.

Emphasizing the fundamentals drove Yanek’s resurgence at USF, which she has carried over to Vanderbilt. Slowed by a stress fracture in her femur, Yanek didn’t run for USF in the 2019-20 season. Instead, she worked diligently with the coaching staff to ensure she would come back healthier than ever.

“We did a lot of cross-training, not a lot of running, the first few months that I was there, and really focused on the little things,” Yanek said. “We dialed in on nutrition and working with a physical therapist regularly.”

This individually tailored approach paid dividends when Yanek returned in early 2021 for a COVID-delayed cross-country season. She finished first among USF runners and fourth overall at the 2020 West Coast Conference Championships with a time of 20 minutes, 18.9 seconds in the 6-kilometer race. She followed up that performance with a 78th-place finish at the NCAA Championships, once again leading USF.

By the time she graduated from USF in May 2021 with a degree in psychology, Yanek had certainly rediscovered her stride. Transferring to USF had turned out to be an excellent decision, allowing her not just to recover and compete, but also to enjoy her running again.

“We’ve really been fortunate that we’ve had and she’s had as much support as she has, because you just want your kids to be happy,” Toni said. “So seeing where she is now and knowing the caliber of people that she has around her…it’s really made a big difference.”

Yanek has brought both great attitude and results to the Vanderbilt running program. She has served as a valuable leader for younger runners and had standout races in the 2021 cross-country season, most notably at the Commodore Classic and the NCAA South Regional.

Thomas admitted that Yanek struggled with racing inconsistency in the fall, but pointed to the regional meet as a sign that she had overcome that issue. She emphasized that Yanek staying true to herself—which won’t be a problem—will define her track season.

“At this point, it’s not so much improving her consistency, it’s maintaining the consistency she’s established,” Thomas said. “Part of that is just knowing who she is and believing in who she is and what she’s capable of—not being distracted by anything that says otherwise.”

Yanek has individual goals of breaking 16 minutes in the 5,000-meter during the indoor season and qualifying for the NCAA Championships in the 10,000 in the outdoor season. But the primary goal remains qualifying for the outdoor national meet as a team. Yanek will look to help get the Commodores there by modeling patience and success as a quiet leader.

“I think the way her [cross-country] season played out, I think she is the epitome of resilience: being able to adjust, learn and become triumphant at the end of the season,” Thomas said. “She was very impactful in that way and I think it’s going to continue. That impact is going to continue through the rest of the year, through track season.”

The mark of a true leader, Yanek wholeheartedly wants to see her teammates succeed. And in a sport where her teammates’ performance partly hinges on her own, she feels compelled to give it her all, all the time.

“Whenever I go through a rough patch of a race, I think a lot about my teammates and that motivates me to work through the rough patch,” Yanek said. “Because I know that they’re all doing their absolute best that they can, and so I feel like it’s my responsibility to do the best that I can as well.”

That desire to commit toward the well-being of others bodes well for Yanek’s future students. Add in her skill in navigating difficult situations through careful deliberation and personalized solutions, and it’s clear that she will excel and make a meaningful impact as a school counselor.

Throughout her stops at Alabama, USF and Vanderbilt, Yanek came out on top through firm self-belief. Her journey is a valuable lesson in the power of mindful determination. Jeremy notes that Yanek’s persistence through an arduous—but ultimately successful—running career is something that everyone can be inspired by.

“We all have bad days, right? Whether you’re running, career, whatever,” Jeremy explained. “But you’ve got to just keep moving forward. And she has more than done that.”

The Vanderbilt Hustler welcomes and encourages readers to engage with content and express opinions through the comments section on our website and social media platforms. However, The Hustler reserves the right to remove comments that violate the outlined policy. Comments which contain vulgarity, hate speech, personal attacks or appear to be spam or commercial promotion will be blocked or removed by The Hustler. The comments section, both on the website and social media, is moderated by the Editor in Chief.
All The Vanderbilt Hustler Picks Reader Picks Sort: Newest
Subscribe
Login
1 Comment
Newest
Oldest Most Voted
Inline Feedbacks
View all comments
R
Rosa Isela Arellano

As a beginner runner, this is so inspiring!