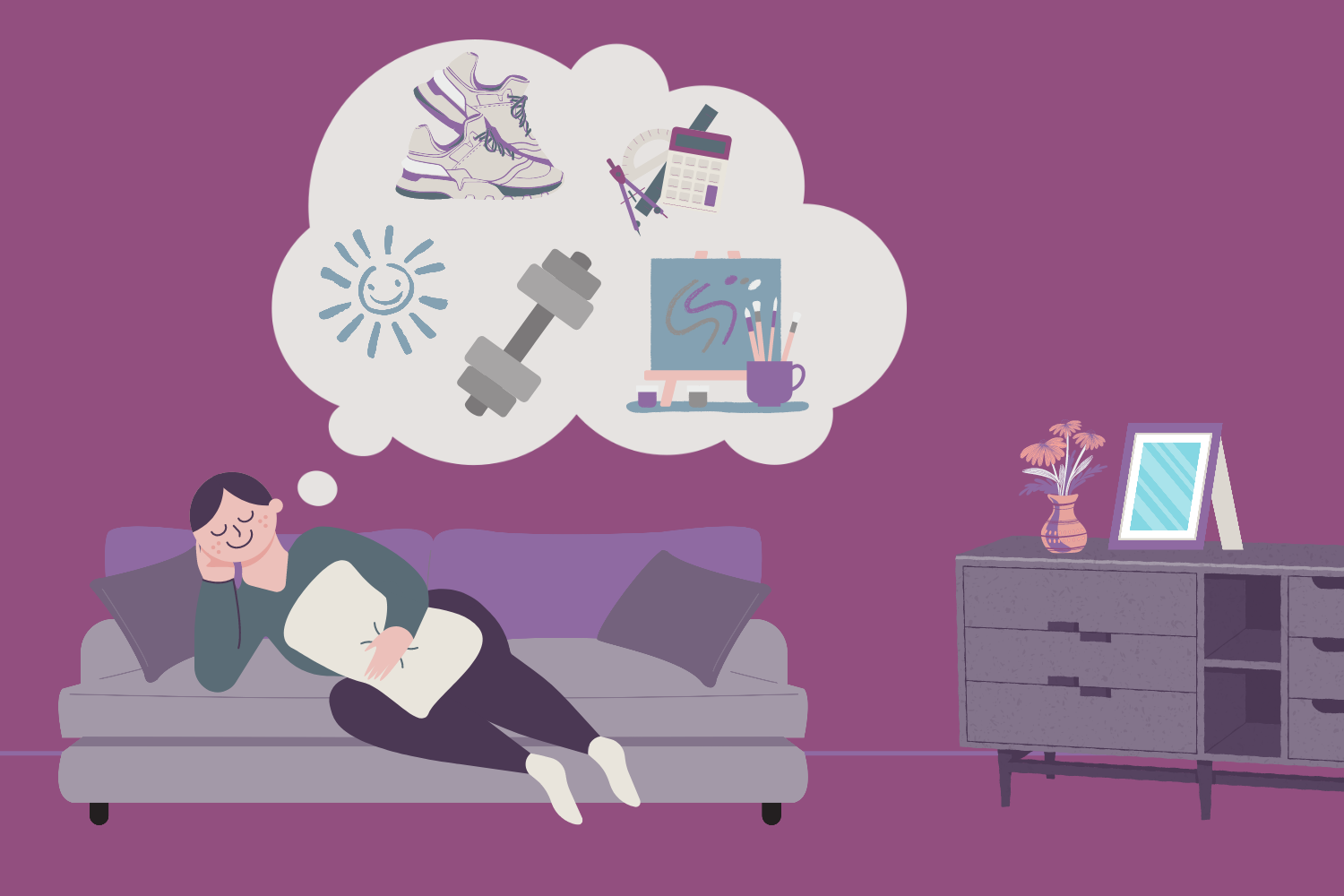 In our fast-paced world, there is rarely a moment we take for ourselves to reflect, to look back or to intentionally gaze forward. (Hustler Staff/Alexa White) (Alexa White)

In our fast-paced world, there is rarely a moment we take for ourselves to reflect, to look back or to intentionally gaze forward. (Hustler Staff/Alexa White)

Contrary to what some people believe about the fruitlessness of New Year's resolutions, I think that any effort to think about your life introspectively and work towards a better you are valuable.

There is a huge wave of hate that goes around about this time of year surrounding the polarizing topic of New Year’s resolutions. Some people plan to work out more, get in more steps, make more time for friends, see their families more, read more books or get off their phones more. However, some people argue that because statistics say you will inevitably fail these goals, you shouldn’t try.

Many people set some sort of goal around the new year. The Western tradition places a lot of weight on the changing of the year, and because of that, we see it as an opportunity to reset and grow. As the year changes, we aspire to change too, each of us trying to become the healthiest, smartest or kindest versions of ourselves.

Interestingly enough, there is a lot of negativity surrounding this positive idea of personal growth. A quick Google search leads to articles about how resolutions are a waste of time and how most people do not keep them. According to some estimates, less than eight percent of people actually keep their resolutions. All of these sources dissuade people from setting resolutions, making it seem like they are destined to fail before they even begin.

New Year’s resolutions are about progress, introspection and thoughtfulness. They are about forward momentum and mindfulness. They can be simple or complex, long term or short term. They are yours. Your hopes, your dreams, your bread and butter.

New Year’s resolutions don’t have to be completed, achieved or arrived at to be meaningful. They can be, certainly, but they do not have to be. If you pledged to read 100 books this year and read nine, that is progress; especially if, without the resolution, you only would have read one.

That is why I am decidedly pro-resolution. In our fast-paced world, there is rarely a moment we take for ourselves to reflect, to look back or to intentionally gaze forward. While I have never quite understood the importance placed on the new year, I can understand the tendency to use it as a starting place.

It’s very neat and orderly to say that you will begin something new on the first day of the first month of this new year, just as you begin writing on the first page of a new journal.

This past year, I resolved to run a mile every single weekday. No matter the weather, no matter how busy I was and no matter where I happened to be. My intention was to build discipline and drive and stamina.

I hate running, so it went about as well as I could have hoped. I watched myself get faster and walk less during the mile each day. But at a certain point, probably while I was running in the snow in Nashville, I realized that it had become almost a punishment for myself. My ankle hurt, I hated this part of my day and I wanted to quit more than anything. So after 31 days of running, I stopped.

To the New Year’s resolution gods, I am a failure. I am part of the 92 percent who fail at their resolutions. But I am proud for a few reasons.

After those 31 days, I stopped doing a mile every weekday and I started looking for exercise that I actually enjoyed. I took long walks around Nashville and I found out how much I loved weightlifting.

I love New Year’s resolutions because they encourage people to think about their lives. I don’t think that any time you spend at the end of the year reflecting will be time wasted, but I do encourage you to make your goals differently this year to allow for the change that we need to actually make a difference in our own lives.

Take my 2021 resolution for example. Instead of resolving to run a mile every single weekday, I could have decided to make my goal to move my body in a way I enjoyed and I would not have failed. If my resolution was simply to find the exercise that I loved, I would have also succeeded.

Though I technically failed my New Year’s resolution, I view it as a success. I got to the root of the resolution, which was to be disciplined by setting a routine. Because of that, I am pro-new years resolution. If you are worried about failure, make a resolution you can’t fail. If you aren’t into resolutions, reflect on your year instead. I even encourage you to set your own intentions for the new year. As opposed to goals, they are something to continually work towards rather than something you achieve.

Regardless of what you resolve to do in the new year, place your focus on reflection and meaningful introspection. You are what matters here. No thoughtfulness is ever wasted, resolutions are no exception.

This year, I opted to set a few intentional goals for myself. These New Year’s resolutions may or may not get completed. The most important part is they will focus me this year. They took thought, and I will periodically think about them and my progress towards them. They are written in all capital letters because I believe in the power of passion and enthusiasm. Other than that, they need no introduction. They appear in my notes app as follows:

I WANT TO BE ABLE TO DO A HANDSTAND

I WANT TO SWIM ACROSS PORTAGE LAKE THE LONG WAY

I WANT TO READ A TON OF BOOKS

I WANT TO BE A BETTER PERSON

I WANT TO CREATE MORE

I WANT TO LEARN MORE ABOUT MYSELF

The Vanderbilt Hustler welcomes and encourages readers to engage with content and express opinions through the comments section on our website and social media platforms. However, The Hustler reserves the right to remove comments that violate the outlined policy. Comments which contain vulgarity, hate speech, personal attacks or appear to be spam or commercial promotion will be blocked or removed by The Hustler. The comments section, both on the website and social media, is moderated by the Editor in Chief.
All The Vanderbilt Hustler Picks Reader Picks Sort: Newest
Subscribe
Login
1 Comment
Newest
Oldest Most Voted
Inline Feedbacks
View all comments
M
Margaret White