After losing six consecutive games, Vanderbilt hopes to get back in the win column in their final game of the season. 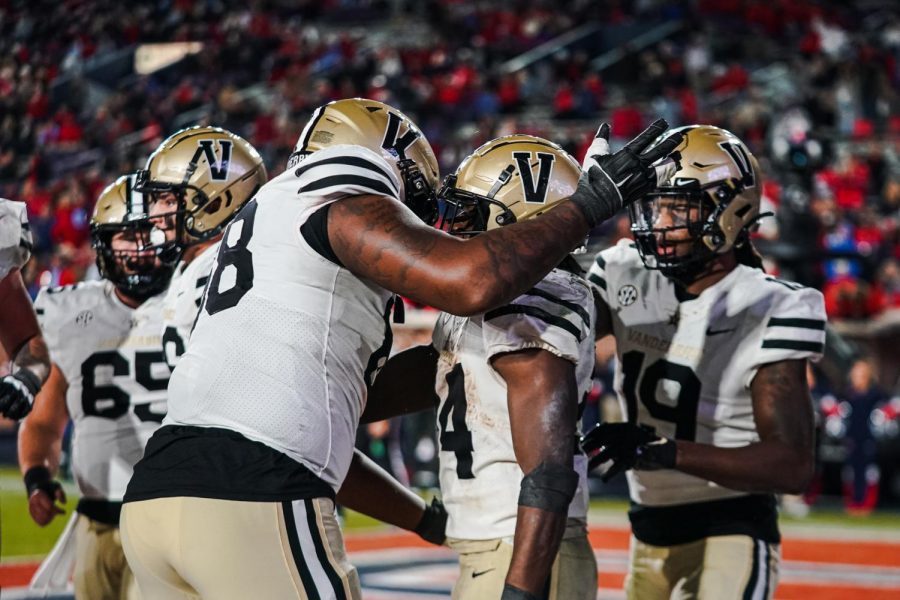 Vanderbilt looks to knock off Tennessee for the fourth time in six seasons (Vanderbilt Athletics).

After suffering a loss to the No. 8 Ole Miss Rebels, head coach Clark Lea’s Commodores will aim to capture their first SEC win on Saturday against archrival Tennessee at 2:45 p.m. CST. Vanderbilt will be looking to win in Knoxville for the first time since 2017. Vanderbilt’s all-time record against the Volunteers is 33-77-5.

In the Commodores’ final regular season game, they will look to march into Knoxville and pull off an upset led by sophomore quarterback Mike Wright. Tennessee last lost at home on Nov. 13 to the Georgia Bulldogs. For Vanderbilt to have the best chance of upsetting the Volunteers, these three matchups need to go in Vanderbilt’s favor.

This season, Wright has completed 53.5 percent of his passes, tallied 844 passing yards and thrown seven touchdowns. Wright’s dominance is highlighted by his mobility. The sophomore has rushed for 366 yards and averages 40.7 rushing yards per game.

“The quarterback [Mike Wright] has really been a tremendous difference in my mind.” Tennessee defensive coordinator Tim Banks said. “He’s given those guys a chance to extend a lot of plays. They’re running option a bunch, which puts a lot of stress on a defense, and that vaunted quarterback draw that everybody seems to be running this year.”

Through 11 games, Vanderbilt has allowed 186.4 rushing yards per game, placing them at No. 103 of the 130 Division 1 college football programs. Although the Commodores allowed 284 rushing yards to Missouri and 236 yards to Kentucky, Vanderbilt made adjustments and surrendered just 144 yards to the Ole Miss Rebels. Vanderbilt’s defense may have shown flashes of improvements, but Tennessee’s Jabari Small must be tamed for the Commodores to have any shot of winning.

Small was one of the honored student-athletes to be placed on the Doak Walker Award watch list at the beginning of the season, and he has proved everyone right. Through nine games, Small has rushed for 509 yards on 99 attempts, rushing for an impressive 5.14 yards per carry. Small has scored six rushing touchdowns this season and will look to add on to that total this weekend. Tennessee’s other running back––Tiyon Evans––is recovering from an injury and is expected to see fewer touches than usual if he suits up on Saturday.

Tennessee’s offensive star is quarterback Hendon Hooker, who has thrown for 2,411 yards and 24 touchdowns while completing 170 of his 243 attempts this season. The redshirt senior brings a dynamic presence to the gridiron as a dual threat. In addition to succeeding through the air with a 70-percent completion rate, Hooker has rushed for 486 yards and five touchdowns in just 11 games. Vanderbilt’s passing defense has given up 273.6 passing yards per game, which is No. 119 in the NCAA.

Last week, Vanderbilt allowed a staggering 326 yards to Ole Miss’ Matt Corral and the passing offense. For Vanderbilt to stay competitive the secondary must first stop the highly talented Tennessee receivers on the perimeter, especially Cedric Tillman. Tillman has tallied 51 receptions, 825 receiving yards and seven touchdowns. He had 200 receiving yards against the stout Georgia defense just a few weeks ago. Vanderbilt will need to limit his production to put pressure on Hooker and the Tennessee offense.

Vanderbilt and Tennessee will kick off this Saturday at 2:45 p.m. CST from Neyland Stadium in Knoxville, TN.