The Vanderbilt Hustler got the chance to speak to Josh Lane, sports editor of the University of Tennessee Daily Beacon, to preview the clash between the Volunteers and the Commodores. 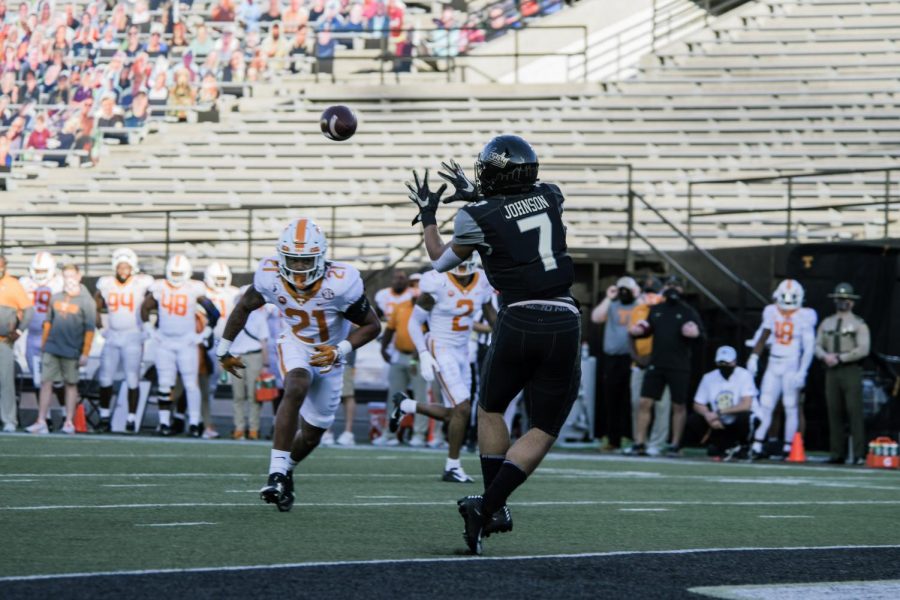 Cam Johnson reels in a catch against Tennessee on Dec. 12, 2020. (Hustler Multimedia/Truman McDaniel)

The Vanderbilt Commodores (2-9) will travel to Knoxville to face off against the Tennessee Volunteers (6-5) in Neyland Stadium this Saturday, kicking off at 2:45 p.m. CST.

The Commodores are in desperate need of a win, and more specifically, an in-conference win, as their last one dates all the way back to October of 2019. Clark Lea’s team is at risk of yet another winless season in the Southeastern Conference, and after a solid performance against Ole Miss last week, the team is sure to be fired up. They’ve suffered six straight losses, while Tennessee enters this week having won two of their last three games.

The Hustler interviewed Josh Lane, sports editor of the University of Tennessee Daily Beacon, to receive some insight into his expectations for the matchup.

Vanderbilt Hustler: How Confident is Tennessee feeling after their 62-14 rout of South Alabama last week?

Josh Lane: I would say their confidence level is definitely back up. I’ll give Josh Heupel credit in his first year. With his philosophy, Tennessee has been more confident heading into every single game, even against Alabama and Georgia. Players have been just as confident that they can go and get a win against those teams. The defense played better against South Alabama and hopefully the offense will click as usual going into their regular season finale, especially after clinching a bowl berth

Tennessee’s balanced offense, ranked fourth in the SEC in rushing (205 yards/game) and sixth in the SEC in passing (255 yards/game), has led to them having the third highest scoring offense (35.5 points/game) in the conference. How can they continue this against Vanderbilt’s bottom-ranked defense?

The Volunteers will be without leading rusher Tiyon Evans for the second week in a row. Last week, the ground duties were spread out evenly between several running backs, headlined by Jabari Small. Do you see that continuing against Vanderbilt this week, or will Small see a feature role?

I’ve gone back and forth on this. I think Small will definitely start and get the bulk of the carries early on. He’s had some injuries of his own though, so Heupel won’t hesitate to send in the other guys (Jaylen Wright and Len’neth Whitehead). I expect him to get around 12 carries. Evans is such a huge loss though, because they were really hoping to have Evans and Small as a one-two punch, but injuries have derailed that plan all year.

Tennessee is allowing 412 yards/game, which is fourth-worst in the SEC. Vanderbilt, on the other hand, averages just 312 yards/game, putting them at last in the Southeastern Conference in that category. Do you see this game being a high-scoring affair, or will Tennessee’s defense step up?

That’s an interesting question. I have not been much of a believer in Tennessee’s defense. Looking back to the games against Ole Miss and Alabama with Matt Corral and Bryce Young, seeing what they were able to do running the ball on third down. Obviously, those are two Heisman-caliber quarterbacks, so it isn’t a huge surprise. But then to go up to Kentucky and see the same thing from Will Levis was frustrating. They made Will Levis look like a Heisman candidate in his own right running on third down. There are certainly some glaring issues. They corrected everything, so to speak, against South Alabama, but we’ll have to see how they hold up against Vanderbilt. Vanderbilt’s success in the second half of games makes me think that they can make some noise, hanging around until the end.

What is your score prediction for Saturday’s game?

I don’t expect to see a Vanderbilt win, but I could definitely see them putting up a couple of touchdowns. Just hearing about how their effort levels don’t drop off even when they’re down, I could see them stay in the game, similar to how it was against Ole Miss last week. I would say the score will be 45-14 in favor of Tennessee.