LinkedIn co-founder and entrepreneur Reid Hoffman will deliver the Graduate Day address for the Class of 2022’s commencement on May 12. 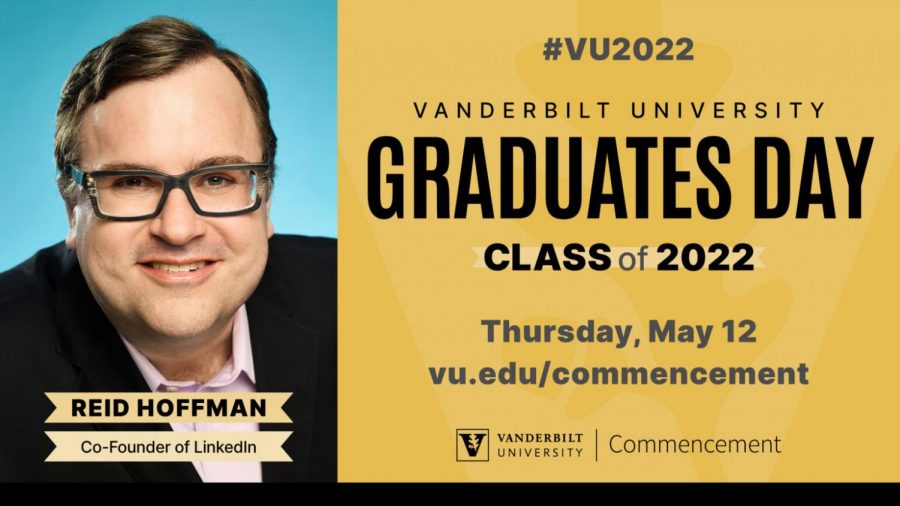 Reid Hoffman, an entrepreneur, investor and co-founder of LinkedIn, will serve as the Graduates Day speaker as part of the Class of 2022’s commencement, per a Nov. 18 press release.

Graduates Day, which celebrates graduates with speeches and other ceremonies, will be held in Memorial Gym and live-streamed on May 12. The Commencement Ceremony, which entails the formal walk and distribution of diplomas, is scheduled for the following day.

Hoffman will also receive the Nichols-Chancellor’s Medal, one of Vanderbilt’s highest honors that recognizes prominent 21st-century individuals that demonstrate a commitment to service, philanthropy and humanity. Past honorees include Dr. Anthony Fauci, Venus Williams, Amal Clooney and Toni Morrison.

Hoffman earned a Bachelor of Science degree from Stanford University in 1990 and a Master’s degree in 1993 from Oxford University, which he attended on a Marshall Scholarship.

In addition to co-founding LinkedIn in 2003, Hoffman has served on the board of directors for PayPal and Microsoft and runs a $20 million Discovery Fund at Greylock Partners, a venture capital firm. He has co-authored the books “The Start-Up of You,” “The Alliance,” “Blitzscaling” and “Masters of Scale”—the latter of which shares the name of a podcast he hosts.

Hoffman has also been actively involved in philanthropy. He serves on the board of directors of Kiva.org, Endeavor Global and [email protected], all of which aim to increase access to resources and financial support amongst underserved populations. He also chairs the advisory board for QuestBridge, a nonprofit organization that aims to make a college education—including at Vanderbilt—accessible to low-income students.

Senior Daniel Chu views Hoffman as a good choice for the Class of 2022’s commencement.

“Honestly, I didn’t know too much about his background before doing some digging,” Chu said in a message to The Hustler. “I was quite impressed with his innovations and entrepreneurship being involved in companies like LinkedIn and PayPal. But I’m personally most excited about his involvement in philanthropy with investing in the young and upcoming.”

Like Chu, Chancellor Daniel Diermeier said he looks forward to the insight Hoffman will share with the graduating class.

“Reid Hoffman has been a relentless innovator throughout his career, helping usher in a digital future that has fundamentally changed how the world lives and works,” Diermeier said in the press release. “We are honored to present him with the Vanderbilt Nichols-Chancellor’s Medal and look forward to his remarks at Graduates Day this year.”