Crump has represented the families of George Floyd and Breonna Taylor, attendees of the 2021 Astroworld Festival and residents of Flint, Michigan. 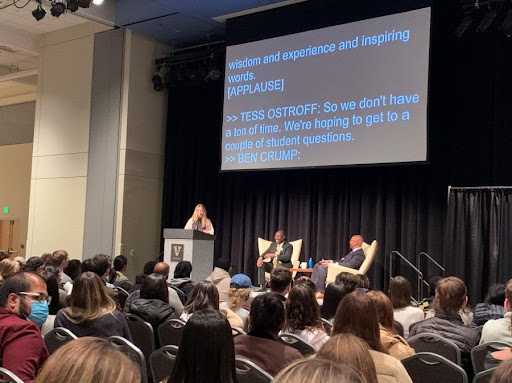 On Nov. 15, members of the Vanderbilt community gathered in the Student Life Center to hear civil rights attorney Ben Crump speak at an event hosted by the Vanderbilt Programming Board (VPB) Speakers Committee. Crump has represented high-profile plaintiffs such as the families of George Floyd, Breonna Taylor, Ahmaud Arbery, Trayvon Martin and Michael Brown, over 200 victims of the Astroworld Festival crowd surge and over 2,000 children affected by the Flint, Michigan, water crisis.

Crump opened the event by describing how the philosophies of late Supreme Court Justice Thurgood Marshall have influenced his approach in choosing clients.

“[Marshall] would always pick cases that shocked his conscience and would have the greatest impact on society,” Crump said. “With all the calls we get, you want to help everybody, but the cases I gravitate towards are the ones that shock my conscience.”

Elaborating on the importance of conscience in legal contexts, Crump reflected on the dichotomy between legality and morality. He referenced the then-ongoing trials surrounding Arbery and Kenosha, Wisconsin, shooter Kyle Rittenhouse to contextualize this point.

“There never could have been more contrast going on simultaneously in American jurisprudence,” Crump said. “Whatever happens in the Rittenhouse trial and the trial of the killers of Ahmaud Arbery, if they’re not held accountable, they’re going to tell us it was legal. We have to stand up and say: ‘That does not make it right.’”

Further underscoring the importance of separating moral and legal judgments, Crump again referenced the Arbery case in order to highlight what he described as racial double standards in the American legal system.

“Imagine that it was a Black father and son who got in their truck and chased an unarmed, young, white man and shot and killed him in broad daylight,” Crump said. “Nobody in society would accept the ludicrous allegation of self-defense. But because Ahmaud was a young, Black man and they are white men, we cannot take it for granted that they will be found guilty.”

Crump’s closing remarks called on Vanderbilt students to use their education to effect positive change in the world.

“Each and every one of you is ready to stand up for what’s right,” Crump said.

Sophomore Collins Agyeman said he learned of the speaker event from a friend and expressed gratitude for the opportunity to attend what he described as a “stirring” experience.

“I was familiar with Attorney Crump’s work beforehand and all the civil rights cases he’s taken on, but I’ve never actually sat down and listened to him in person,” Crump said. “[Crump] has a very strong oratory and a powerful command of his words. He really got the crowd more educated and excited about achieving civil and racial justice.”