We attended an exclusive screening of Mindy Kaling’s newest project at Graduate Nashville. 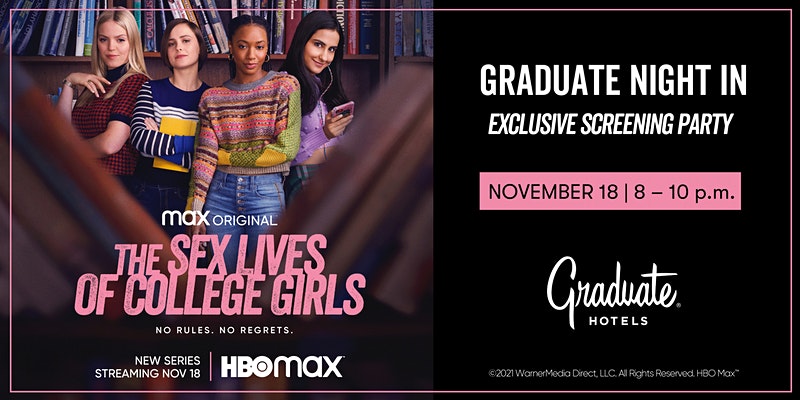 Ever had an awkward hookup? Then we’ve got the show for you. On Nov. 18, the Graduate Nashville hosted a viewing party of the first two episodes of “The Sex Lives of College Girls” in partnership with HBO Max. Created and produced by Mindy Kaling and Justin Noble, this new show follows the adventures of four first-year roommates at Essex, a fictional New England liberal arts college, as they navigate hookups, breakups, relationships and other sexual exploits that come with your first year of college.

While they may just be 18, the characters have lives full of drama. Kimberly is trying to balance her job and her studies, which she finds far more difficult at the prestigious college than at her public high school in Arizona. Self-proclaimed “sex-positive” Bela dreams of writing for the male-dominated campus comedy magazine (and may or may not grant sexual favors to do so). After being ditched by her preppy high school friends, Leighton finds that the first week of college is not “the best seven days of your life,” as her alum father promised her, and she struggles to feel like she fits in as she is forced to confront her identity. Whitney, who has been having an illicit affair with her soccer coach, discovers that he is married. Oh, and Kimberly and Bela attend a “naked party,” which is exactly what it sounds like.

“I thought ‘The Sex Lives of College Girls’ did a great job of capturing what it’s like to be a college freshman in a funny and light-hearted way,” sophomore Emma Hale said. “It reminded me of my first year and I definitely felt myself relating to some of the characters’ cringey choices.”

Filmed at Vassar College, the show takes place on a picturesque campus, not unlike Kaling’s undergrad years at Dartmouth. On the other hand, she admits that the sex lives depicted were far from her experience, though “All the fear about grades and not fitting in, that I pulled from my own experience,” she told the Hollywood Reporter. Despite having “sex” in the title, Kaling ultimately hoped “to tell a story of four passionate, bright girls in college,” which she certainly achieves—the coming-of-age show uses sex and romance as an entryway into all of the complex emotions and new experiences that the girls are undergoing as they navigate their new college identities.

Although a bit cliché at times, “The Sex Lives of College Girls” is a breezy, digestible show that is more entertaining than it is raunchy. Admittedly, I was a bit dubious of how a comedy would deal with the ins and outs of hookup culture, but I happily discovered that the show neither glamorizes it nor shames women for participating in it. It holds space for the girls’ varying attitudes about sex and details their exploits (or lack thereof) in a comedic but honest way. It’s refreshing to see the sometimes emotional and often awkward sex lives of young women portrayed without judgement and outside of the male gaze, which is a rarity in my experience. This show is one to which any college girl, regardless of sexual prowess, can relate.

The screening event was part of Graduate Hotels’ partnership with HBO Max and took place at five other Graduate Hotel locations the same night. Check out the show on HBO Max by logging in with Xfinity On Campus.