The Commodores re-entered the win-column thanks to strong performances from Brinae Alexander and Iyana Moore. 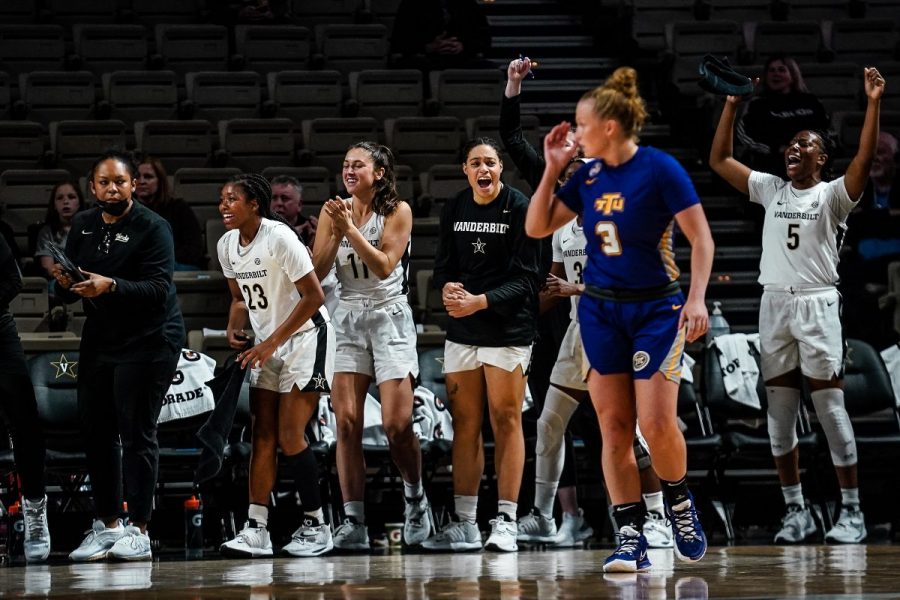 After falling short to Little Rock and Middle Tennessee State, Vanderbilt leaped back in the win column on Thursday night with a 75-55 defeat of Tennessee Tech. The Commodores’ impeccable success stemmed from a stout defense on Thursday evening. Vanderbilt forced 24 Tennessee Tech turnovers and a measly 30.7 3-point percentage. The Commodores offensive prowess was also uncontainable, as they shot a noteworthy 50 percent from the field.

The Vanderbilt offense kicked off the night with a rocky beginning, scoring just 25 percent from the field and trailing the Tennessee Tech Golden Eagles 9-5 with 3:30 remaining in the first quarter. Although Vanderbilt’s start did not go as planned, the Commodore offense began to play with confidence and control after senior Brinae Alexander sunk a jump shot and converted on the and-1 opportunity. Alexander’s 3-point play would be the turning point of the night and the Commodores took control for the rest of the night. Vanderbilt finished the quarter leading the Golden Eagles 17-9.

“We’re still trying to figure out who we are,” head coach Shea Ralph said. “We recovered quickly and I thought our defense was really solid. Basketball is a game of runs. Overall, I was really happy with our effort and our energy. We had a lot of contributions from more people on our team.”

The Commodores entered the second quarter with unmatched momentum. Ralph’s defense proved to be unbreakable for the first half of the quarter. Tennessee Tech’s Mackenzie Coleman scored a much-needed basket with 5:38 remaining in the second quarter, but Vanderbilt was already leading 23-11 and in the driver’s seat. Vanderbilt did not allow the Golden Eagles to score a single point from 5:05 remaining in the first quarter to this point.

During Tennessee Tech’s dry spell, the Commodores scored 18 unanswered points. But, Vanderbilt’s lead was quickly in jeopardy as they allowed the Golden Eagles to score seven consecutive points. However, Vanderbilt fought right back, outscoring Tennessee Tech 8-2 in the final three minutes of the first half. Vanderbilt entered the half with a 34-20 cushion.

Junior guard Kaylon Smith opened up the third quarter converting on a 2-point jump shot, giving the Commodores a 16-point lead. The Golden Eagles would not yet surrender and scored the next eight points to narrow the margin to 36-28. The Commodores then shifted back into gear, maintaining a 51-40 lead with one quarter remaining. 11 of Vanderbilt’s 17 third-quarter points came from freshmen Iyana Moore and De’mauri Flournoy.

“We can’t win if we’re not scoring more than 40 or 50 points per game,” Ralph said. “That was our focus coming into the game.”

Vanderbilt would not take their foot off the gas in the fourth quarter, scoring an impressive 41 points in the second half. The Commodores tied their season high of 75 points.

“It’s nice when the ball goes in,” Ralph said. “I think that is the first thing that helped, but our shot selection was better. We had less turnovers and made more 3-point shots. The team was more in rhythm than the last couple of games.”

Vanderbilt will return to the hardwood on Sunday when they host the Jacksonville State Gamecocks at 2:00 p.m. CST.