After a lackluster offensive performance, Vanderbilt lost for the first time this year, falling to the VCU Rams 48-37. 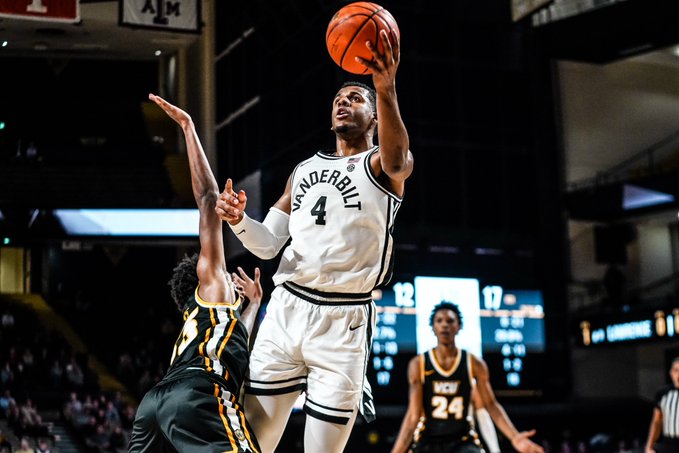 Jordan Wright goes in for a layup against VCU on Wednesday, Nov. 17, 2021. (Vanderbilt Athletics)

Vanderbilt has looked promising so far this season, but after a 48-37 loss to VCU, Commodore fans will undoubtedly be questioning where the team’s offense goes from here. Throughout the competition, the Rams played stingy defense, forcing 21 turnovers and holding the Commodores to just 23-percent shooting from the field and only two made 3s on 25 attempts.

“I thought we still got the looks, we just did not make the shots,” head coach Jerry Stackhouse said. “They came in a little bit more desperate, a little more hungry than we did, so it’s a good wake up call for us.”

Only one Commodore put up double-digit points: junior Jordan Wright who still only had 15 himself. Star guard Scotty Pippen Jr. was double-teamed all night and struggled to find a way out. The stat sheet doesn’t provide any relief for Pippen’s off night. He went two of 10 from the field and zero of three from deep, picking up half of his eight points from the stripe. He played for 36 minutes and garnered a team-low plus-minus of -14 as well as a team-high five turnovers.

“He [Pippen] has to trust and know that we should be playing four-on-three, he’s just got to accept that it’s not going to be his night,” Stackhouse said. “I think he held onto some possessions a little longer than he should have when he could have got off of it and we had some advantages on the weak side. I thought he did a good job in the initial thrust of commitment to him, and then, he held it too long.”

The game started off slowly for both sides—the Commodores especially. In the first quarter of play, both teams combined for merely 20 points, nine of those coming from the Black and Gold. Vanderbilt started 0-7 from beyond the arc in that time and went 4-15 shooting overall, but the most concerning stat was their turnovers. The team managed to rack up six turnovers due to VCU’s suffocating defense and high-court press.

Vanderbilt’s first 3-pointer came 12 minutes into the game. The drought wasn’t for a lack of shooting, either. It took the Commodores 10 attempts to find their stroke, taking the lead 12-11 when they did. Still, the first half was uninspiring offensively for Vanderbilt. The only consolation for Stackhouse was how his squad played defensively. They were relentless, making smart challenges and staying true to the primarily zone defense they utilized. Their preventive efforts kept the team in the game, trailing only 23-22 at the half. Despite an ugly first period shooting the ball (28.6-percent from the field to be exact), Vanderbilt forced VCU into 11 turnovers and kept the Rams to just under 28-percent shooting from the floor.

The first 10 minutes of the second half brought much of the same for Stackhouse’s squad. They went 0-7 from deep and had a whopping six turnovers. However, while Vanderbilt’s ugly shooting night continued, VCU’s improved. The Rams went 7-15 en route to a 17-6 run to start the half. The streak put the Commodores in a hole from which they would never recover.

On the bright side, the matchup finished on a slightly better note for Vanderbilt. They outscored the Rams 9-8 with the help of free throws—five of their nine points came from the line. Even so, the Commodores ended the night down 11, turning the ball over more often than they scored (31.8% turnover rate compared to a 27.3% scoring rate).

“Basketball is a game [where] you can play all the great defense you want to, but you got to score and we didn’t do that tonight,” Stackhouse said.

Vanderbilt will be back in action in Nashville on Saturday, Nov. 20, at 7 p.m. CST against 2-1 Winthrop—a matchup that Commodore fans hope will cleanse their palate after an extraordinarily poor offensive performance.