Here’s three matchups to watch Saturday as the bottom feeders of the SEC East face off in Nashville. 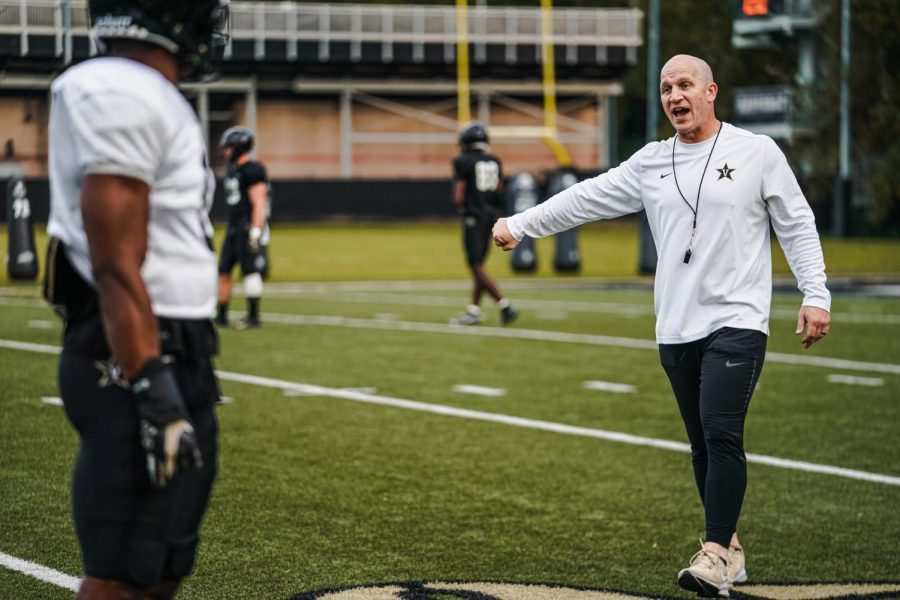 The Vanderbilt Commodores (2-6, 0-4) will battle the Missouri Tigers (3-4, 0-3) on Saturday, Oct. 30, with each team searching for its first conference win of the season.

Since Missouri joined the SEC in 2012, the Commodores are 3-6 against the Tigers in SEC play. While last year’s contest in Columbia shattered glass ceilings despite Vanderbilt’s 41-0 loss, this year’s game highlights the current weaknesses of the conference.

After last week’s thrashing by Mississippi State, Vanderbilt will be looking to secure Clark Lea’s first career SEC win—and the program’s first SEC victory since 2019 when they bested the Tigers at home.
Vanderbilt’s Pass Defense vs. Quarterback Conor Bazelak
Despite the score, Vanderbilt’s defense looked solid through the first 20 minutes of the Mississippi State game. The Commodores intercepted Will Rogers twice and nearly a third time but for an overturned interception. However, Vanderbilt allowed 461 yards and five touchdowns through the air.

Conor Bazelak has had a bit of an up-and-down season this year. The Tiger signal caller is averaging 275 yards per game and has 12 touchdowns on the year, including four against a tough Kentucky defense. But, he’s interception-prone and has already thrown seven passes to the opposing side. Forcing turnovers will be vital for the Commodores, as the offense has struggled and needs all the help it can get. Vanderbilt is third in the SEC and tied for ninth in the nation when it comes to forcing interceptions, so look for Lea’s scheme to center around pressuring Bazelak to incentivize him into making bad decisions.
Vanderbilt’s Front Seven vs. Running Back Tyler Badie
It’s no secret Vanderbilt is struggling to stop the run. Opponents are averaging 172 yards per game against the Commodore defense. Vanderbilt has also surrendered 13 rushing touchdowns through seven games.

On the Missouri side, Tyler Badie is lighting it up for the Tigers this season. He’s absolutely gashed opponents this year, rushing for 735 yards and nine touchdowns. By comparison, Vanderbilt has rushed for 798 yards—as a team. Badie is a receiving threat as well, adding 265 yards and four more touchdowns to his total offensive production.

If the Commodores can bend but not break in the trenches, the Tiger offense will be limited and will have to rely on the pass. Vanderbilt has to prevent Missouri from rushing for over 75 yards, or it’s going to be a long Saturday on West End.
Vanderbilt’s Morale vs. In-Game and Outside Pressure
While expectations were not high coming into 2021, Vanderbilt has still not met them on the gridiron. The loss to ETSU and the shutouts at the hands of Georgia and Florida, respectively, have left the Commodore faithful with a less-than-positive impression of first-year head coach Clark Lea.

The visiting Tigers will definitely be a challenge to overcome this weekend. But, it’ll be up to the home team to control the tempo and force their opponent to play their game. It will also be up to Vanderbilt to ignore the outside noise and execute. Creating long,sustained drives, winning the time of possession and limiting the mistakes will be key for Vanderbilt. More importantly, Lea’s team will have to shake off miscues and bounce back defiantly. Vanderbilt can’t let Missouri dictate the flow of the game and if the Tigers jump ahead with an early lead, the Commodores need to respond.

As Rocky once said, “It ain’t about how hard you hit, it’s about how you can get hit and keep moving forward.”

Vanderbilt and Missouri will kick off this Saturday at 2 p.m. CDT from Vanderbilt Stadium.