U.S. Federal Depository locations on campus to merge by 2022

Vanderbilt’s library system houses over 700,000 government documents, spanning from 1884 to the present day. 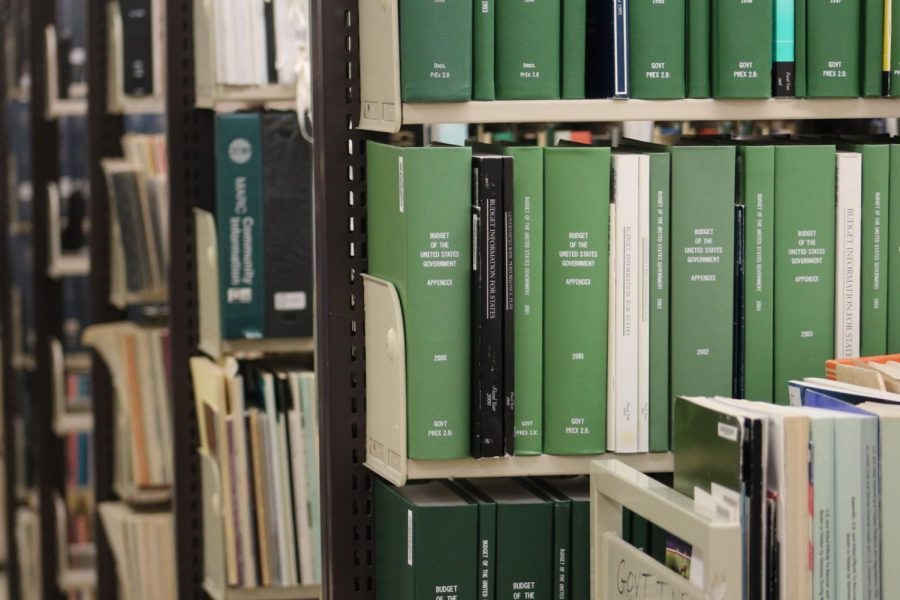 Budget of the United States documents in the Central Library Federal Depository, as photographed on Oct. 24, 2021. (Hustler Staff/Katherine Oung)

Vanderbilt’s U.S. Federal Depository Library Program (FDLP) collection will be consolidated into a single catalogue by May 2022, per Federal Depository Coordinator Will Stringfellow. It comprises 700,000 paper, microfiche and CD-ROM holdings dating back to1884 and is the oldest FDLP location in Tennessee.

The U.S. Congress designated Central Library as a FDLP location in 1884 and the Alyne Queener Massey Law Library as a FDLP location in 1976. This year, the Law Library will drop its FDLP status, one reason for the consolidation. Central Library’s documents are also currently housed in Peabody Library, the Special Collections and University Archives Office and the Library Annex. All the documents will be moved to the Digital Commons and Faculty Commons building, increasing accessibility to the Vanderbilt depository.

“Putting [the collection] into one building makes the management a lot easier,” Stringfellow said. “It also allows us to better serve the entire university. If you need something from any of the embedded libraries, it’s better access to those materials.”

The U.S. Congress created the FDLP in 1813. The program allows universities, historical societies and state libraries around the country to acquire and hold government documents. Per the U.S. Government Publishing Office, the U.S. government is the largest publisher in the world, and there are currently 1,250 FDLP locations around the country.

“We’re stewards of the collection, and we manage the full lifecycle of the federal materials that we receive—everything from the item selection to the withdrawal process for the public,” Stringfellow said.

Per Stringfellow, the size of the collection housed at Vanderbilt exceeds 10,000 linear feet if lined up. The Central Library location selects 48 percent of the almost 6,000 categories offered by the U.S. Government Printing Office for depositories to source materials from. One of the largest collections that Vanderbilt owns is the United States’ Congressional Serial set, of which Vanderbilt houses an almost complete set, which is over three fifths of a mile long when laid out.

“Going through old Congressional documents and seeing how people interacted in them is an opportunity for all of us to grow and inform each other,” Stringfellow said.

Central Library and the Law Library are both designated as ​​”selective depositories,” meaning they can choose which documents to receive from the government and discard documents as they see fit. Per Stringfellow, Central Library is also one of six “regional holders” in Tennessee, meaning  it holds Presidential, Executive Office of the President and State Department documents acquired by the entire region.

“For the [documents] that we hold as part of that regional role, we hold one physical copy and we do not discard them,” Stringfellow said. “We’re the last resort for the state for those items.”

Per Stringfellow, he and nine undergraduate student assistants have been working on preparations for the Central Library and Law Library consolidation since the 2020-21 academic year. Preparations consist of cataloging and barcoding items in both collections, as well as throwing out duplicates.

“We are discarding some duplicates because there’s really no need to keep five different copies of something,” Stringfellow said. “But we’re not getting rid of a single unique item, so we’re still able to retain all of these original pieces of primary source material.”

Stringfellow explained that the work of physically transitioning federal depository locations on Vanderbilt’s campus was planned to begin January 2020, but the pandemic pushed the start date to May 2022. The pandemic has also affected access to the federal depository, as the general public is not physically allowed in this section of the library. To access these collections, they must use online resources or request the materials online by contacting Stringfellow.

For student workers at the depository collections on campus, the pandemic also affected the nature of their work. Junior Caroline Pope, student assistant to the Government Documents Archive at Central Library, explained that a majority of her work consisted of cataloging and numerating records during the 2020-2021 school year. However, she stated that tasks like these aren’t as prioritized this year as the merge with the Law Library’s collections takes priority.

“It’s very crucial to know what happened in the past, so that we’re aware of how that impacts our current actions,” Pope said. “It’s important on a research-level and as a documentation of what we should be doing better right now.”

Even as many depositories, including Vanderbilt’s, are taking steps to virtually catalog their materials to make them available online, Stringfellow remains interested in preserving physical collections as well.

“As part of our nation’s history, the physical document is also the physical artifact,” Stringfellow said. “You can replicate the information but not the item itself.”