Live at the Basement East, Gus Dapperton was on Fire

Beyond bedroom pop—Gus Dapperton gave an upbeat and fun performance at the Basement East Oct. 19. 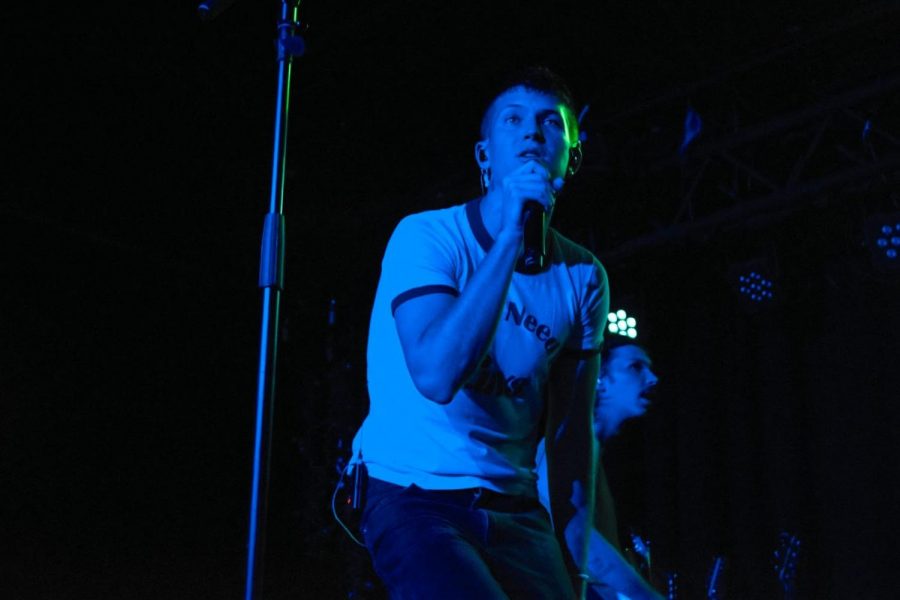 If you told me it was possible to time travel back to the 90s and attend a dreamy pop concert, I would not have believed you. Yet, last Tuesday night, Gus Dapperton’s show was exactly that—a mix of nostalgia, electric sounds and a smoke-filled room.

Gus Dapperton is a 24-year-old indie bedroom/synth-pop singer. In 2016, he released his debut single, “Moodna, Once With Grace,” and since then, he has released two EPs and two albums—the most recent being “Orca.”

Perhaps you’ve heard him featured in the “13 Reasons Why” soundtrack, with the hit “Of Lacking Spectacle,” or his feature on the popular Tik Tok song “Supalonely” by BENEE. I certainly have. My TikTok review from 2020 said that I watched 217 videos that used the sound “Supalonely (feat. Gus Dapperton)” during the year. So, anyway.

His songs emulate classic sounds of the bedroom pop genre while pushing beyond it as well. As the sole producer of his music, Dapperton brings a new level of creativity and personalization to the genre. His style and artistic genius have also attracted fans. For music video fanatics, it is worth noting that Dapperton’s music videos are, in terms of production, similar to short films. His most recent album, “Orca,” moves beyond easy tunes and lighter lyrics to detail the artist’s struggle with depression.

The Oct. 19 show began with up-and-coming band spill tab, a creative project of Claire Chica and her producer David Marinelli. She opened up by saying how grateful she was to be performing with Gus, as years earlier, she had been his merch manager. Chica was full of energy, the crowd nodding their heads and dancing along to her pop-anthem, “Name.” Her onstage chemistry with Dapperton was showcased by his quick interlude. While she was playing an unreleased song, Dapperton ran out, drawing shouts from the crowd. The duo danced around together for a short moment before Dapperton swiftly returned off stage.

However, spill tab brings more than just headbangers and energy. Chica traded her guitar for a ukulele and played “Cotton Candy,” a ruminative ballad to which the audience slowly swayed along. She then seamlessly transitioned to singing in French for her song “Santé.” Her 2020 EP, “Oatmilk,” which features two songs in French, demonstrates her unique ability to captivate audiences in multiple languages. It also gave me the opportunity to practice my French listening skills, which should totally count for class credit from my French professor.

Post-Chica’s performance, the room was quiet for a moment, people talking and an excited hum filling the air. The second Gus Dapperton stepped on stage, the crowd erupted into cheers. Dapperton opened with his rock-heavy and energetic “Bluebird” as he ran around the stage, dancing around with his signature head down move and encouraging the crowd to get moving also.

He proceeded through an 18-song setlist including hits from across his career like happy-go-lucky “Prune, You Talk Funny” and “My Favorite Fish,” an idiosyncratic love song about his favorite fish in the sea. One of my personal favorite moments from the show was his performance of “Medicine,” beginning with the sole sounds of a piano and rising to a full band (and full-volume) production.

Next, Dapperton went on to his only cover of the night, Bruce Springsteen’s “I’m on Fire,” really establishing the late-80s, early-90s nostalgia feeling of the night. The second half of the show was stacked with fan favorites, like dance-worthy “Gum, Toe and Sole,” where Dapperton energetically pointed at sections of the crowd to get them moving and started doing high knees on stage. Additionally, he performed his quintessential “I’m Just Snacking” and easy-listening “World Class Cinema.”

The night ended with the popular and melodic “Post Humorous” and from the opening moments to the end of the song, everyone in the audience was captivated by Dapperton’s on-stage presence, the chemistry of the band and the flashing lights. His distinct ability to keep the crowd engaged till the end of the show was impressive, and as the band played its last notes and left the stage, everyone was sad that the performance was finally over.

But not really. After a brief crowd chant for an “encore,” “one more song” or “10 more songs,” Dapperton ran back out to perform the lead single “First Aid.” The crowd instinctively joinedd in, yelling every word, dancing around and basking in the inviting atmosphere.

The night proved that Dapperton not only has a signature musical style, but his approach to performance puts him beyond the mold of a typical bedroom pop artist. His ability to charm the crowd through sporadic movement and loud tunes, alongside thoughtful lyrics, shows his multi-talented nature. If Dapperton decides to grace us with his presence again and ventures back to Music City, we will be there!