The finalized negotiations will succeed an existing collective bargaining agreement between the union and the university, which will expire on Nov. 15. 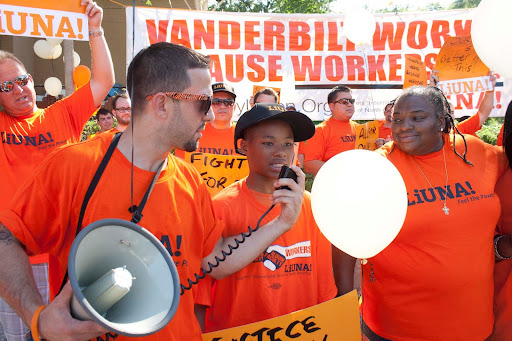 LiUNA Local 386 during a rally in May of 2012. (Photo courtesy of David Rutledge)

Vanderbilt and LiUNA Local 386 are in the midst of new contract negotiations. The union has prepared approximately 20 different proposals to create more sustainable working conditions for its workers.

LiUNA Local 386 is a labor union that comprises approximately 600 members of the university’s dining, janitorial, groundskeeping and craft maintenance staff. The union was chartered in 1934, and Vanderbilt workers were organized into it in 1971.

The union’s proposals will succeed its existing collective bargaining agreement with the university, which is set to expire on Nov. 15. The details of these proposals have yet to be disclosed by both the union and the university to preserve the confidentiality of the ongoing negotiations.

Issues in service operations this year have in part been due to nationwide staffing shortages, leading to numerous service obstacles, including slower operations across campus facilities and certain facility closures.

Jaime Ramos, union steward in housekeeping, referenced these operation challenges, citing that people across all three shifts of the sector have needed to work overtime to accommodate for missing staff. In addition, he mentioned that inconsistencies in communication from new supervisors have resulted in constantly changing work instructions.

“I think that’s where a lot of our problem is: the supervisors have no clue sometimes what they’re supposed to do, and they’ll look at us—the people that have been there for a decade or more—for answers,” Ramos said. “It’s okay, but we’re not getting paid that salary—we’re getting the minimum.”

“The new faces that come in are not being fulfilled in the aspect of pay, as well as training,” Bratton said. “The university, along with the union, should develop a training program that would be beneficial for those folks, and there needs to be a group of young folks to come, [so they] can resume [our] workload as [we] age and retire.”

Anne Alukonis, chief union steward in dining, also reflected on challenges with Campus Dining operations. She said that this year, dining staff had to adjust to meal plan changes and learn how to operate a new cashier system while facing student dissatisfaction.

“It took a lot of vocalization on [the students’] part to pull [Campus Dining operations] together,” Alukonis said. “Unfortunately, [workers] don’t have a big voice in what [students] get, and even though a lot of us were real vocal about the issue, we got a lot of flack from students this year. Being on the front line was relatively tough for us because of all the changes that happened.”

While a Sept. 13 university Town Hall stated that Campus Dining employees will be receiving a $500 signing bonus, $500 retention bonus and a weekly bonus to mitigate staff shortages, David Rutledge (‘08), union representative, stated that there is more to be done to accommodate all Vanderbilt workers.

Kaylin Davis serves as president of Hidden Dores, a student advocacy organization for marginalized communities, which launched a campaign for Campus Dining workers’ rights in 2020. Davis stressed the importance of continued student support for Vanderbilt workers.

“While Vanderbilt says that its worker shortage is part of a larger issue, [workers] would not be leaving if they were given the proper support,” Davis said. “Student voices are essential if we are to prompt a response from Vanderbilt.”

In an Oct. 20 Senate meeting and an email sent to the student body, the VSG Senate expressed its support for Vanderbilt employees’ unionization for better working conditions.

Prior to the ongoing negotiations, union members received a 2 percent raise from the university, effective since July 1. According to Rutledge, this existing contract sets the minimum base pay rate for Vanderbilt workers at $12.75 per hour, though it varies per job.

Ramos said that workers’ pay, in the context of their cost of living, is a major reason for the university’s worker shortage. He cited that their wages as well as the cost to reside in Nashville and Davidson County have forced most workers to live outside of the county and commute daily to Vanderbilt.

“The pay is a really big issue with us right now. Look at what it’s going to entail to buy a car and the upkeep that it is going to cost to travel to and from [Vanderbilt],” Ramos said. “Because of our pay, there’s probably about half of us that have second jobs too.”

According to Rutledge, the university needs to place a stronger emphasis on its employees’ well-being if it wants to expand its workforce.

“If the university were paying adequate wages to be an attractive employer, we wouldn’t be facing the issues of being so short-staffed, and you wouldn’t see people being forced to work more overtime than they would like to in order to cover the amount of work that needs to be done,” Rutledge said. “Certainly, the university has plenty of resources to build new buildings and [pursue other projects], but they can’t find the money to adequately pay their employees who are expected to maintain all these new buildings.”

In a Sept. 29 interview with The Hustler, Chancellor Diermeier said that the union and the university are making progress in their ongoing negotiations.

“We are talking with our workers, but also with our students, faculty and staff on how we can continue to improve our services and we’re committed to doing that,” Diermeier said. “We had a really challenging start to the semester, but our people have really stepped up and I think we’re already turning the corner.”

Rutledge shared that he had close relationships with university workers during his time as a Vanderbilt student, but now, many of them have left the university due to feeling a lack of support from the administration.

“We want to make sure that people’s wages not only keep up with the increasing cost of living here in Nashville but also reflect the hard work that our folks put in,” Rutledge said. “It ought to be a good job taking care of students here at Vanderbilt, but the wages that people are paid and the respect that they’re shown on the job site should reflect the importance of the work that they do.”

Alukonis added that Vanderbilt’s national ranking should be reflected in its employee treatment.

Per Rutledge, the contract is a nearly 70-page document, aimed to improve multiple facets of workers’ labor conditions. He said the union and the university have agreed on several of each other’s proposals but are still “grinding away” at others.

“This is our opportunity every so often to amend the contract and fight for better conditions for everybody that we represent,” Rutledge said. “Everything’s on the table, from wages to hours to uniforms to working conditions—you name it.”

Historically, Rutledge said that the union’s relationship with the university has been “up and down.” Due to the complex nature of the contract, he stated that the negotiation process is extremely time-intensive and taxing for both sides.

“Some contracts have been more contentious than others, [depending] on personalities, circumstances and issues being debated,” Rutledge said. “For every proposal either side makes, there [are] arguments to be made for or against it, research and justification for them to be prepared and often a lot of emotional investment in what we’re trying to accomplish.”

In an email to The Hustler, a university representative communicated that the university respects the service of its employees and their unionization.

“Vanderbilt University appreciates the commitment and hard work of all team members,” the representative said. “We also value our relationship with the union.”

Alukonis, Bratton and Ramos collectively expressed a wish for constructive dialogue between the union and the university.

“We want to make Vanderbilt better because we love it,” Alukonis said. “We love the kids—that’s for sure.”