Vanderbilt squirrels aren’t out to get you, you’re just in the way 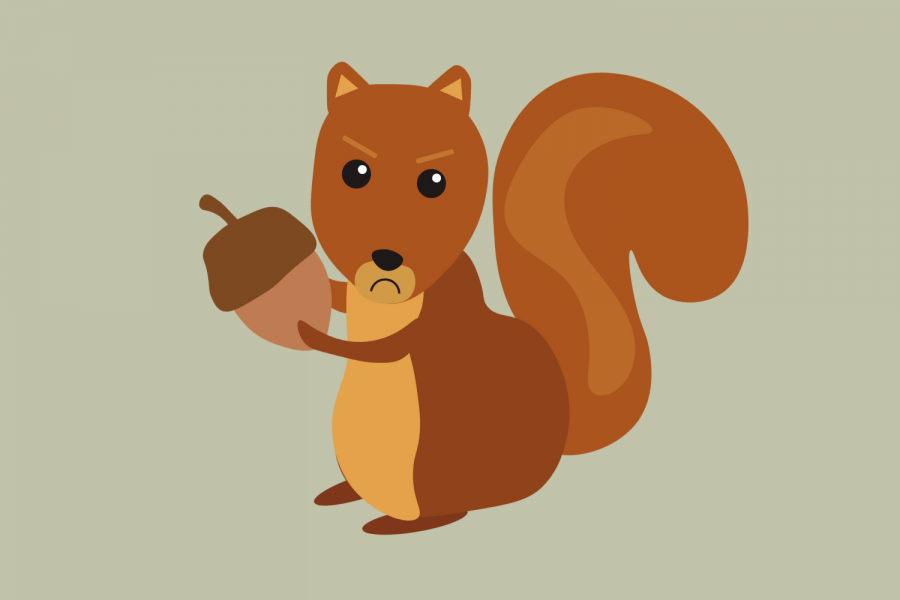 How does one officially become a student at Vanderbilt University? There are several prospective answers to this question: be accepted through the common application process. Wait in line to sign that super official anti-plagiarism document at the Honor Council event you have to dress up for as a first-year. Transfer from another collegiate institution. Win a scholarship.

Of course, all of these options are incorrect. One officially becomes a student at Vanderbilt University by attempting to throw something out in a trash can, hearing strange sounds emanating from it, and shortly coming to realize—however unpleasantly—that the culprit is a hungry squirrel.

Vanderbilt prides itself on its fabled 3:1 squirrel-to-student ratio, but there’s a crazy difference between seeing it on the school’s Instagram bio as a bright-eyed acceptee and actually experiencing it on campus months later. My first run-in with a Vanderbilt squirrel came somewhere in late August, when, wearily walking back to Commons from main campus after scoping out my schedule, I saw the first trash can at the end of the 21st Street pedestrian overpass as a perfect resting place for my long-finished mango smoothie.

That trash can definitely moved. No one can convince me that it didn’t. As I slowly approached, mango smoothie ever-so-slightly trembling within my palm, I could hear indistinct rustling noises coming from its insides. I earned my place at Vanderbilt, I thought to myself. And I’ve seen enough horror movies to be prepared for whatever’s trying to tell me I didn’t. This was false. I looked away, hastily tossed my smoothie in the general direction of the trash can (I missed), and nearly shrieked in horror as a bushy-tailed figure quickly emerged.

“I think campus squirrels are at first deceptively appealing—what’s not to like? They have cute fuzzy tails, and trying to catch them (and never succeeding) gives the East Beast eternal hope,” East House faculty head Dr. Elizabeth Meadows told the Hustler in an email. (The “East Beast” is her dog Luna). “But then I became unnerved by the sheer number and boldness of the squirrels. I think the turning point was when I saw one jump out of a garbage can with a slice of pizza in its mouth. These are not squirrels who are scared of humans—one of them ran right over my foot.”

Rodents are quite common in my hometown of New York, so when I was inundated with squirrel warning after squirrel warning in the months leading up to my arrival on campus, I was more amused than intimidated. As much as the squirrels here belong to the same species as their New York colleagues—Eastern Grey—there is something about the Vanderbilt kind that immediately registers as…unCommon(s).

“I feel like they’re, like, genetically different from squirrels everywhere else,” first-year Elizabeth Ebhogiaye said. “They kind of act like puppies in a way. They’re scurrying and picking up trash, and when you walk towards them, they’ll either stay there or move closer to you.”

One potential explainer of campus squirrels’ collective attitude is a (well-deserved) pride in the fact that they, too, got into Vanderbilt University just like the rest of us. Although every squirrel I attempted to interview for this piece declined to comment, one can reach the conclusion that Vanderbilt squirrels do, in fact, understand that they are Vanderbilt squirrels, and use this feat to flex on anyone who dares step in their path.

“I don’t think they can differentiate the college, but I think they definitely know they’re college squirrels,” first-year Jonah Barbin said. “I think they have that kind of swagger.”

This also channels the prospect of inter-campus dating. Hear me out: if they got in, just like us, does this mean they date Belmont squirrels, too?

“Do they ever make that trip?” Barbin said. “If you’re a squirrel, how are you to make that trip from Vanderbilt to Belmont? Do they go through Hillsboro Village, like the rest of us?”

They definitely have the drive. Listed as an invasive species since 2016, the Eastern Grey Squirrel has built its global reputation on the basis of audacious ambition. In 1967, for instance, when an unusually high acorn yield incentivized New York squirrels to find creative new hiding places, several were witnessed attempting to swim across the entire Connecticut River—100,000 drowned squirrels were pulled from a single reservoir. With go-getter approaches to nesting and nutrition, they have displaced less-competitive native red squirrels in a number of European countries, and somehow become the unofficial mascot of Central Park—Vanderbilt too, apparently (though they may not boast the sex appeal of Mr. C)—after just having a few pairs introduced there in the 19th Century for the pleasure of Victorian passersby.

For as much as a nuisance such an aggressive attitude may become, especially once crossed with a campus of equally ambitious students going back and forth from classes and meetings, the squirrels do have redeeming qualities. One student willing to see past the rough exteriors of our bushy-tailed peers is junior Garfield Zhang. In his three years at Vanderbilt, Zhang has become its unofficial “squirrel whisperer.” Follow his Instagram, and you may see him comforting them through pregnancies, teaching them tricks, or giving them high-fives.

Squirrels were not common in Zhang’s hometown of Singapore. His first up-close encounter with them on campus was something that would piss a lot of us off.

“When classes started to move onto Zoom last year, that’s when I decided to start taking my classes outside on the lawn,” Zhang said. “And that’s when the squirrels gathered around and stole my lunch.”

But rather than let that be the stopping point of a man-rodent connection that hadn’t even begun yet, he found the moment intriguing, and devoted more time to making sense of his fellow Commodores. It’s a decision that seems both uncommon, and potentially perspective-changing, for the rest of us—first impressions aren’t exactly Vanderbilt squirrels’ strong-suit, but cut them a little slack, and you’ll begin to see more and more that they’re just like you: hungry, tired, and making ends meet one way or another.

“Squirrels are scary sometimes because they’re scavenging in the trash can, and when people are trying to throw away garbage, the squirrels will be scared and jump out,” Zhang said. “That is scary. But squirrels eat seeds, and when they fail to find the seeds they bury, those seeds germinate and become plants—the human colonization of nature invades some of the squirrels’ habitat, so they have to adapt. And because of this, some squirrels depend on things like the trash can.”

Maybe, at the end of the day, squirrels are evil. But hey—so are we.