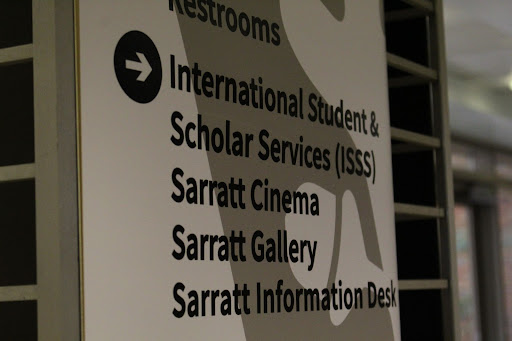 A sign at the International Student & Scholar Services office, as photographed on Sept. 16, 2021. (Hustler Multimedia/Geena Han)

Per Christiansen, the international student statistics of the last two years reflect the effects of the temporary suspension of visa services at certain U.S. consulates around the world due to the COVID-19 pandemic. The Centers for Disease Control and Prevention’s (CDC) website also states that several presidential proclamations limited or suspended the entry of noncitizens who were present (within 14 days before attempting entry to the US) in certain countries—such as China, Iran and the entire European Schengen Area—to prevent the spread of COVID-19. The website also reads that many embassies around the world additionally paused the nonimmigrant visa application process, including the F-1 student visa.

“COVID-19 has probably been a part of the discussion for about two to three percent of students who have decided not to come,” Christiansen said. “There were so many more unknowns.”

“We just didn’t know when [the embassies] would get back open due to the variants,” Christiansen said. “We started tracking where all our students are coming from, to see whether all the embassies and consulates were open, what the wait times were; I would get a daily update on all of that.”

“Because we didn’t quite know where our international student numbers would fall due to travel issues, vaccination issues and visa issues, we actually ended up admitting more,” Christiansen said.

First-year Anseley Philippe, an international student from Haiti, said there were obstacles surrounding the visa process during the pandemic, particularly with scheduling a visa interview.

“The [visa application] portal never let me in because all of the interview slots were taken down, due to the turmoil that was raging in the country,” Philippe said. “I had to log in throughout the day, looking for new slots that never got added.”

Sophomore international student Buket Alkan, who is from Turkey, remarked on how the suspension of visa services resulted in her missing the fall semester of her first year.

“The embassy in Turkey would only give expedited appointments, which weren’t available to students who applied for the F-1 visa,” Alkan said. “I have sophomore friends back home who haven’t been able to enter the U.S. for three semesters now.”

Higher deferral rates, especially among international students, for the Classes of 2024 and 2025 also reflect the effect of the COVID-19 pandemic on travel and visa applications. Christiansen said a pre-pandemic class typically had around eight students take a gap year, usually due to religious or military service.

The percentage of international students at Vanderbilt has risen throughout the years with a 9.3 percent increase from 2006 (3.1) to 2018 (12.4). The number of countries from which students applied has also increased from 50 countries ten years ago to 135 countries in the 2021 application cycle. Moreover, students from 74 different countries were admitted to the Class of 2025.