The Vanderbilt Commodores host the Mississippi State Bulldogs this Saturday in search of their first SEC win of the season. 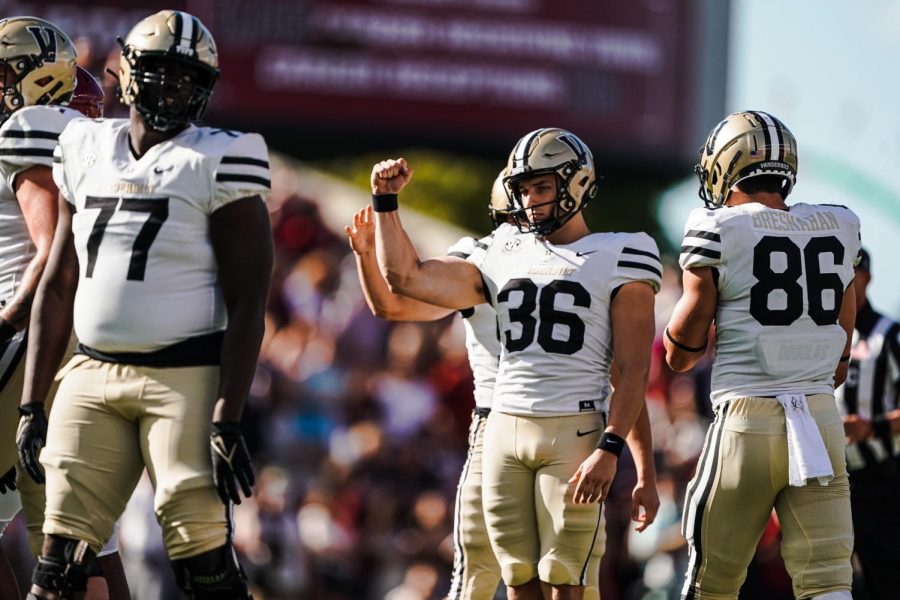 The Vanderbilt Commodores (2-5, 0-3) face the Mississippi State Bulldogs (3-3, 1-2) this Saturday at 3 p.m. CDT as they look to snap their 16-game losing streak against conference opponents.

The Commodores are 7-14-2 all time against the Bulldogs, having lost the past four contests, including last year’s unsuccessful 24-17 effort in Starkville.

The Commodores are 0-3 to start conference play and after a gut-wrenching 21-20 loss this past Saturday to the South Carolina Gamecocks, head coach Clark Lea’s team desperately needs to find a way to win. Here are three matchups to look out for on Saturday.
Quarterback Mike Wright vs. Cornerback Emmanuel Forbes
Lea confirmed on Tuesday that Ken Seals continues to recover from a finger injury, so Wright, the 6’4”, 190 lb. sophomore quarterback who made his first start this past Saturday against South Carolina, will get the nod under center against Mississippi State. Last week, Wright went 11-for-21 on pass attempts for 206 yards against the Gamecocks, and he threw a touchdown and an interception. He also ran for 41 yards on 15 attempts.

The Commodores have fallen behind early in six of their seven games to start the season, so Wright will need to try and provide a steady, reliable presence on the field and eliminate turnovers. Mississippi State’s defense ranks 13th in the SEC (only ahead of Vanderbilt) in passing yards allowed per game, so it will be a good opportunity for Wright to continue to get his feet wet under center. Wright will, however, have to face Forbes, the hard-hitting sophomore cornerback who leads the Bulldogs so far this season with one forced fumble and two interceptions. To confuse the Bulldogs’ defense, look for Lea incorporating more of a run game from his quarterback into the offense. Although Mississippi State’s defense is stronger against the running game—third in the SEC in yards per game—Wright is mobile and athletic, and the dual-threat quarterback can use his running ability to confuse players like Forbes.
Vanderbilt Defense vs. Quarterback Will Rogers and the Air Raid
For the Bulldogs, it will also be a sophomore under center in Will Rogers. The 6’2”, 210 lb. quarterback leads the SEC in passing yards with 2,162 through six games. He has had a very strong start to the season, with 14 passing touchdowns and only five interceptions, but he is coming off his worst start yet. Last week, in Mississippi State’s 49-9 loss against Alabama, he was held without a touchdown for the first time all year and threw three interceptions despite still throwing for over 300 yards.

The Commodores should expect an aggressive offensive approach from Mike Leach, the Bulldogs’ head coach, with Rogers under center. Vanderbilt’s defense is last in the SEC in passing yards per game, allowing an average of over 261 per contest so far. With that in mind, they may simply be unable to prevent Rogers from racking up a great deal of passing yards. Instead, their focus should be on keeping the Bulldogs out of the end zone. Eliminating the deep ball and having a “bend but don’t break” mentality is the key to the Commodores staying in the game and their defense getting the ball back into Wright’s hands.
Punter Harrison Smith and Kicker Joseph Bulovas vs. Mississippi State Special Teams
Mississippi State likely boasts more speed and athleticism than Vanderbilt on both offense and defense, so special teams will be very important this Saturday for the Commodores. Having clean, effective punts can help the defense, and being able to put points on the board from field goals on strong offensive drives can make quite the difference in the end.

In Vanderbilt’s 42-0 loss against Florida, Smith had a 6-yard punt and Bulovas went 0-for-3 on field goals—two of which came in the first half. The Commodores trailed 21-0 at halftime when the score easily could have been 21-13, and this was in large part due to their poor special teams’ play. This past week against South Carolina, Bulovas made both field goals and Smith had a strong game punting the ball. As a result, the Commodores were in a position to win the game.

The Bulldogs like to score touchdowns, but when they do elect to kick field goals, it is senior Brandon Ruiz, who is 3-for-4 on the year, that attempts to put the ball through the uprights. Bulovas and Smith will have to do their best to outduel Ruiz and senior punter Tucker Day to give their team a shot at victory.

The Commodores and Bulldogs face off this Saturday at 3 p.m. CDT from Vanderbilt Stadium.