Vanderbilt’s most accomplished program will look to bring home another title through a mixture of veteran leadership and fresh talent. 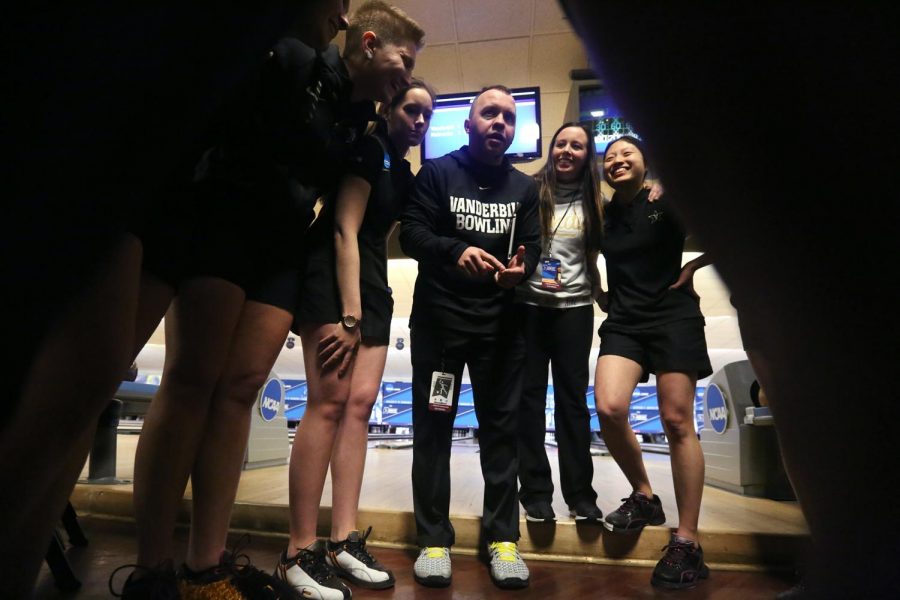 It’s a quarter past noon on the first day of fall break, and the Vanderbilt bowling team is rolling into its third hour of practice.

Freshman Paige Peters nails the last pin of a spare right down the middle. Walking back to the group, she gets a high-five from Amelia Kiefer, who calmly walks up to the lane and nails her second consecutive strike. The whole team claps in approval as Kiefer turns to the monitors on the back wall to check her stats. This is fairly typical of a practice game: nearly every frame is a strike or a spare. The team is just that good.

In fact, Vanderbilt is so good that it’s ranked No. 4 in the country in the first National Tenpin Coaches Association poll of the year. However, if you talked to the players or the coaches, you would think this team has a long way to go.

Last April, the Commodores’ season ended in disappointing fashion. After winning the Southland Bowling League’s conference tournament, the team lost to eventual national champion Nebraska in the quarterfinals of the National Collegiate Bowling Championship. In fact, in the last four seasons, Vanderbilt has either won the national championship or been eliminated by the team who did.

That’s the expectation for this year as well.

Cummins, who last year was the Southland Bowling League Tournament MVP and a second team All-American, is the most decorated player on a roster overflowing with talent. Thanks to the return of graduate student Samantha Gainor, Vanderbilt’s roster boasts 11 players who are split almost perfectly between each grade level. And, thanks to the group’s top-to-bottom talent, everyone has the potential to play a role this season.

“This feels like the most talented roster we’ve had one through eleven in the sense that going into next week we really don’t have an idea of what our lineup is going to be,” associate head coach Josie Barnes said during practice.

This roster depth is reflected by the fact that the Commodores have not one, but two players returning from last year’s All-Southland First Team, with aforementioned tournament MVP Cummins and senior Angelica Anthony. Even freshmen Paige Peters, Kaylee Hitt and Kailee Channel, all three of whom are already well-acquainted with the bright lights of national competition, will be vying for playing time come Oct. 22.

No matter who the Commodores play in their first tournament, the expectation will be the same.

Vanderbilt will certainly have its work cut out for it at the season-opening Colonial Lanes Classic in New Orleans, Louisiana, Oct. 22-24. The competition will be hosted by No. 16 Tulane and feature Southland League foe No. 9 Louisiana Tech, who will doubtlessly be looking forward to a rematch of last year’s Southland championship match.

This will be the second Tulane-hosted tournament for Gainor, who made the decision to rejoin the team for one more year as she pursues a graduate degree in marketing. Though a place on this specific all-tournament team eluded her as a junior, Gainor’s impressive résumé of two NTCA All-American teams, a first team All-Southland and seven other all-tournament teams, means the longest-tenured player in Vanderbilt bowling history will have a solid shot at assisting her team to victory come October.

The following weekend, the Commodores will head to Farmingdale, New York, where they will have the chance to take on No. 7 Youngstown State. This tournament holds special importance for one Vanderbilt bowler in particular—sophomore Amanda Naujokas, who grew up near Farmingdale on Long Island. She’s also rather bullish on the Commodores’ chances this year.

“I feel like this season is going to be a lot better because last season we didn’t really interact outside of practice [due to COVID-19 restrictions],” Naujokas said. “I feel like this year we’re a lot closer.”

Those close connections are key to building a team’s chemistry, which is acknowledged as especially important by the Vanderbilt coaching staff.

“The chemistry of the group is in some ways more important than the talent of the group,” Williamson said.

Though the Commodores don’t lack talent, neither will their competition. Vanderbilt will have its first tournament alongside No. 3 Arkansas State—without a doubt the Commodore’s largest obstacle to repeating as Southland League champions—from Nov. 12-14 at the Stephen F. Austin Ladyjack Classic. At the Kenosha, Wisconsin, tournament, the Commodores may also face a blast from their own past—No. 1 Nebraska. In the event this happens, Vanderbilt’s squad has been instructed to simply play its game.

“I hope to try and just compete against ourselves,” Williamson said. “We can’t control what the other team’s doing. There’s no defense. If they shoot crazy scores and we don’t shoot crazy scores, there’s nothing we can do.”

From there, Vanderbilt will round out its fall schedule with a trip to Millsboro, Delaware, for the Eastern Shore Hawk Classic. The tournament is hosted by No. 20 University of Maryland Eastern Shore and will include the Commodores’ first round opponent in last-year’s NCAA tournament—No. 13 Mount Saint Mary’s.

One thing that makes bowling different from other sports is its lack of set matchups.

“The unique thing about bowling is, if you look at football, for example, there’s a big look ahead to playing Tennessee,” Barnes said. “For bowling, at competitions you play the good teams often. There’s not a one-shot situation like there is in other sports.”

Vanderbilt will begin 2022 with a plane ride to Las Vegas, Nevada, for the Stormin’ Blue and White Classic from Jan. 8-10

“I think it’s going to be cool to travel a lot,” said freshman Kaylee Hitt. “I bowled in high school for six years and we competed in tournaments every weekend, but this is a whole different level.”

This solitary trip out west will also serve as déjà vu for sophomore Jennifer Loredo, who, as a high school senior, won the under-20 Las Vegas competition put on by the same organization.

The Commodores will then head into back-to-back competition weekends with the Northeast Classic from Jan. 21-23 and the Prairie View A&M Invitational from Jan 28-30. Because of their attendance at all three of Vanderbilt’s tournaments to start the spring, it’s likely that the Commodores will have to face off at some point against No. 2 McKendree out of Lebanon, Illinois. In fact, it was the McKendree Bearcats who narrowly came out victorious in last season’s Prairie View A&M Invitational against both Nebraska and Arkansas State—the teams ranked No. 1 and No. 3 in this year’s preseason rankings.

These two tournaments won’t be anything new for Vanderblilt bowling veterans like senior Angelique Dalesandro, who as a sophomore placed in the top 30 at the Prairie View A&M Invitational. The Illinois native will most certainly be looking to repeat that performance, or improve upon it, should the Commodores suit up against her home-state university.

Two weeks later, the Commodores will head back to Texas for a tournament sponsored by conference-rival No. 9 Louisiana Tech. Vanderbilt will hope to finish higher than its third-place result from last year’s LTU tournament—a competition in which they won six out of nine matches but ended behind the host team and preseason No. 6 Sam Houston State.

Rather than focus on the past, Vanderbilt’s coaching staff has a different plan for tackling adversity during the season: play every game like it’s their last.

“It’s more of getting back to that space regardless of who we play to try and show that we’ve grown,” Williamson said in response to his team’s struggles last postseason.

From Feb. 25 to 27, the Commodores will compete at the Stallings Invitational in Greensboro, North Carolina. Returning from a COVID-19-induced absence last season, the tournament will be hosted by No. 5 North Carolina A&T.

This trip east will serve as a coming-home tour for sophomore Caroline Thesier of Mooresville, North Carolina—a mere hour away from the site of the tournament. The Stallings Invitational will be the former Junior Team USA member’s first time playing in front of a home-state crowd.

With two weeks off before the next competition, the Commodores will get to breathe a sigh of relief before hosting the Music City Classic from March 18-20. This will serve as the last regular season tournament for Vanderbilt and many of bowling’s biggest programs. After that, it’s back to the grit and grind of postseason play.

It was after the Music City Classic of 2020 that the world, and college bowling, came to a screeching halt due to COVID-19. That’s why Williamson wants to make sure his team not only competes for a championship, but appreciates the time it spends perfecting its craft day-in and day-out.

“COVID showed that things can be taken away really quickly,” Williamson said. “So hopefully we can enjoy what we’re doing.”

When the Southland Bowling League Championship kicks off on March 25, Vanderbilt will be looking to do what no team in conference history has done before—win back-to-back league titles. There’s a reason this has proven so difficult for any program to accomplish: four of the last seven national title winners have come from the Southland.

Regardless of what happens during the regular season and conference tournament, the Commodores will have their eyes on the big prize in April: the NCAA championship. Vanderbilt is one of only five programs to boast multiple bowling national titles since the tournament’s inception in 2004. This year’s team will look to bring the university a third championship trophy—a feat that has only been accomplished by two other schools.

In order to reach that goal, the Commodores will have to face a murderers’ row of talented programs with equally-high expectations. It’s a good thing that the bowling practice facility has the key to success painted in large letters on its left wall.

You can watch every match of Vanderbilt bowling via livestream on their YouTube channel. Check out their schedule here.