The Commodores came away with 21 wins over three days against tough competition. 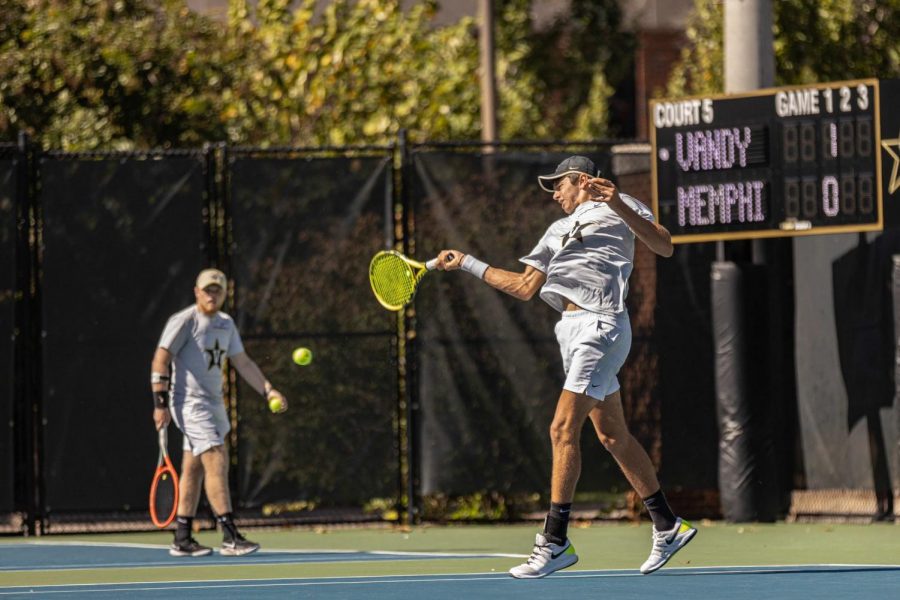 Vanderbilt dominated the Commodore Invitational as host against Georgia Tech, North Carolina and Memphis in their final competition of the fall. Comfortable at home in the Currey Tennis Center, the team succeeded at all levels with 21 match wins and three team dual-match victories.

“I thought it was a good weekend,” head coach Ian Duvenhage said. “I told the team I thought they were mentally and emotionally tough in some really difficult matches.”

On day one, the rain in Nashville forced the matches between Georgia Tech and Vanderbilt inside. However, the weather did not shake the Commodores in their first home matches of the season.

In doubles, the No. 19-ranked duo of George Harwell and Max Freeman came away with a win (8-6) over sophomore Chen Dong and third-year Keshav Chopra of Georgia Tech.

In a ranked battle, Vanderbilt’s No. 51 team of transfer Siim Troost and freshman Michael Ross faced off against the No. 8 team of sophomore Andres Martin and sophomore Marcus McDaniel. Though Troost and Ross lost (8-5), the matchup served as great experience against high levels of play for the junior-freshman duo.

Finally, Klopper and Ferreira carried their match (8-4) against third-year Brandon McKinney and freshman Ángel Guerrero to give Vanderbilt the doubles point on the first day.

Vanderbilt’s Troost fell (6-4, 3-6, 7-5) in his first singles match at the Currey Center despite a strong three-set effort against Guerrero.

“I thought Michael Ross played his best tennis of this semester,” Duvenhage said. “He’s starting to look like the guy we recruited.”

On the second day, the sun came out and the Commodores were able to head outside for their matches. Yet they still maintained continuity in their level of play, winning seven of their 11 matches against North Carolina.

In doubles, there were four matchups as the teams played to a 2-2 draw for the doubles point.

Surprisingly, the two ranked duos of Vanderbilt lost against North Carolina’s doubles teams. Seniors Brian Cernoch and Mac Kiger defeated Ross and Troost by a razor-thin margin (8-7), while Logan Zapp and Casey Kania won over Harwell and Freeman (8-3) in a lopsided victory.

In singles, Harwell defeated No. 44 senior Brian Cernoch (7-5, 6-4) to get his second straight ranked win of the invitational in a matchup of two veterans of collegiate tennis.

On the other courts, singles matches proceeded quickly as only one match went to three sets.

Klopper, Ferreira, Freeman and Ross all managed two set victories, with Klopper’s match against Kiger being the most competitive (7-6, 7-6). Notably, Ross’ win against Dillon stood out as his first home singles match win of his young career at Vanderbilt.

North Carolina’s Murphy and Li won the other two singles matches against Sisam and Troost, respectively.

“Georgia Tech and North Carolina are top 30 teams,” Duvenhage said. “It’s not time for us to get carried away, but it shows what we can do when we work hard and are ready to compete.”

On day three, the Vanderbilt team faced six players from Memphis, along with two local players from Lipscomb. The games were again held outside on Sunday afternoon, and again, the Commodores found success.

In doubles, Vanderbilt competed in four matches, three against Memphis and one against the duo from Lipscomb.

Klopper and Ferreira took down the duo of sophomore Pau Fanlo and freshman Pablo Malea from Memphis despite strong opposition (8-6) to earn an undefeated invitational doubles record. After a victory (8-4) against Memphis, freshmen Harry Rock and Sam Edgar, Sisam and Robb-Wilcox went undefeated at the tournament as well, though in one less match. Finally, Harwell and Freeman dominated (8-1) Lipscomb junior Maksim Bogdanovich and graduate student Pedro Uribe.

In singles, the team won five of their seven matches. Troost dominated Edgar (6-2, 6-3) to end the fall with his first home singles match win as a Commodore.

Freeman and Harwell both ended quickly, defeating Fanlo (6-1, 6-3) and junior Jeremy Taylor (6-3, 6-2), respectively. Ross also ended early, losing against Malea (6-3, 6-3) despite showing flashes of a comeback within each set.

The final three matches of the tournament continued on, as Klopper, Sisam and Ferreira were all in tight competitions. Klopper managed to pull off another ranked singles victory against No. 76 junior David Stevenson (6-3, 7-5). Sisam was next, with a three-set (6-3, 2-6, 6-3) win over Uribe on the auxiliary courts.

Ferreira, in a showdown with Rock, lost the first set on a tiebreak (7-6) before putting together a masterful second set (2-6). Since their match had stretched on far beyond the others and fatigue was setting in, the players and coaches negotiated a 10-point tiebreak to settle the match.

The entire match had been reduced to ten points and the intensity grew between Ferreira and Rock. Showing signs of fatigue, Ferreira struggled with his serve. He missed nearly all of his first serves in the tiebreak and even double-faulted. Rock pulled away 10-4 to win the match.

“I’m happy with the weekend, there were a lot of positives,” Duvenhage said.

Vanderbilt ends the Commodore Invitational with an undefeated 3-0 record in dual-matches and 21 total match wins across singles and doubles. Competition will resume for the team in January, with the schedule yet to be determined for the spring season.