We bothered people in Stevenson Library at 5 AM

Stevenson Library is the only campus library that’s open for 24 hours—and when you’ve got a paper due at 8 a.m., all 24 are necessary. 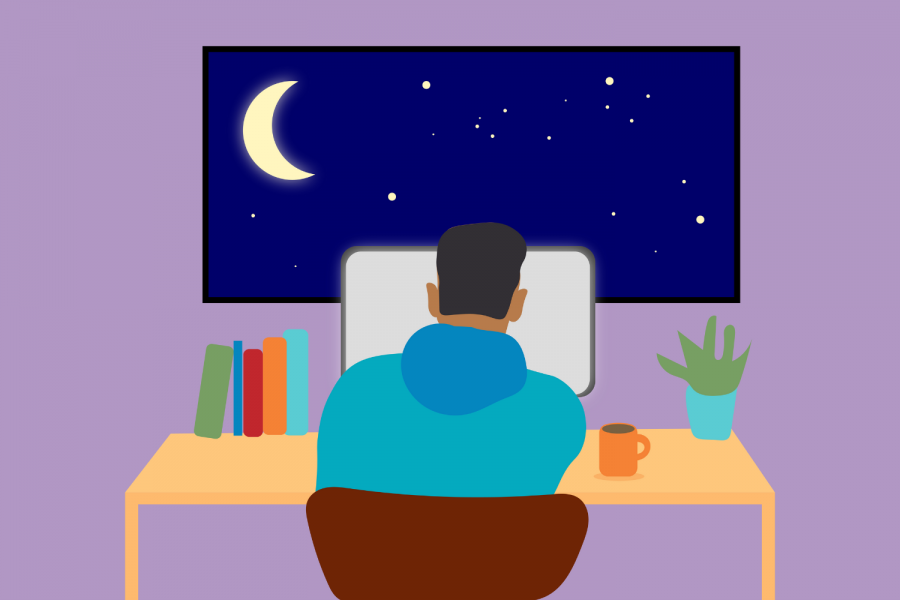 In the months leading up to my departure for Vanderbilt this past summer, the most common memes I received in family group chats were some variation of one universal concept: a visibly distressed college student, barely keeping it together, while seeming to drown in both books and misfortune.

None of the memes were funny. One reason for this is that they were, for the most part, grainy Facebook image files that looked like they had barely survived the trek from 2011. The second and most important reason, though, is that they shed light on a fear that I did not yet want to admit—I was going to be that college student. I was going to be rotting away in stacks upon stacks of boring literature. (Professors: if you are reading this before grading my midterm essays, this is not directed at you!) I was going to be the grainy, archetypal struggling-college-student Facebook meme.

Coming to Vanderbilt as a first-year and seeing peers masterfully balance work and play, you begin to think that college could be possible without those insane post-midnight crunches the memes warned you of. This bubble quickly bursts when you find out about Stevenson Library. Just walk beyond that unnecessarily heavy glass door, and the grand, unfunny meme called reality comes back into frame: once a certain time of night passes and the happily whispering clusters of friends leave the open desk area, you come face-to-face with the dreaded grind. Energy drinks. Textbook stacks. Silent panic. You’re in the all-nighter zone.

Because it is open for 24 hours, Stevenson Library is the only place of its kind on campus where such a scene is possible. It is an intimidating spectacle to glance at on the outside alone: the spiral staircase on its lawn leads to a quite frightening marble sculpture; the wall-wide windows reveal bunches of intense, robotic students hunched over laptops; the modernist exterior makes it feel a tiny bit like a building they’d usher you into in a “Hunger Games” movie before revealing that you’re set for execution. (One of the first memes posted by a recently-started Vanderbilt “affirmations” Instagram account facetiously asserts that “NAVIGATING STEVENSON WILL NOT MAKE ME PANIC ATTACK.”)

But it only gets more intimidating inside. As I type this sentence, for instance, it’s 3:49 a.m., and the only sounds around are the click-clacking keyboard of whoever’s in the cubicle behind me and the steady whir of the AC unit. Rolling chairs remain eerily pulled out from the desks they belong to, acting as living ghosts of their last inhabitants. Frankly, I am very scared. And the fact that I’m here to do research on fictional beasts for a literature seminar is not that big of a help.

When I set out to ask the last few people in Stevenson Library what the hell they were doing there at 5 a.m. one recent Wednesday, the dreaded memes became more real than they had ever been. I was blown off—understandably—by a number of subjects before anyone opted to tolerate me. One pair of students politely shooed me away from the reading room they had been using to put finishing touches on a project; in another case, before I could finish whispering “if you have time,” (as in: to answer a few questions about what the hell you’re doing here at 5 a.m.), one student nearly scared me awake with the way he retorted, “I don’t.”

“It’s just a matter of desperation,” senior Ryan Moon said, a hefty bunch of papers scattered across the desk in front of him. He had been at Stevenson since 10:00 p.m. the previous night. “I know that this is an important thing in my life. That’s what keeps me up.”

For some students, such a feat of sleep deprivation is not only possible but necessary, while for others, it is an unfathomable extreme. In order to even report this piece, I needed three Rockstar energy drinks and a bathroom mirror pep-talk. Many Stevenson regulars are more used to—and fond of—the hustle than I am.

Tucked away in a cubicle, first-year student Vikas Bharti seemed to be on a roll when I tapped him on the shoulder.

“It’s way quieter than any other place on campus,” Bharti said. “There’s no limit to studying here. So you can study for even 24 hours if you want.”

When I jokingly asked him whether he would ever consider actually studying at Stevenson for a full 24 hours, his response seemed to epitomize very well the mentality of anyone here past 5 a.m.

“Frankly speaking, we should [study for 24 hours] as humans, but there is a limit,” Bharti said. “At least three hours of sleep is necessary. So if we want to study for 24 hours, that’s not fine, I guess. I think we need five hours of break—so the maximum we should spend studying is 19 hours, and in the other five hours we should be doing things like eating, sleeping, et cetera.”

One of the biggest differences I thought I found between my hometown of New York City and Nashville is that one “doesn’t sleep” while the other does. When you’ve observed a place like Stevenson for long enough, though, you begin to realize that this is not true: Nashville doesn’t sleep either, especially when Nashville has a paper due at 8 a.m.

“To be honest with you, I leave here at 7 [a.m.], and you have people still coming and going then,” Stevenson security guard Zachary Jones said. “So there’s not really a specific time where everyone starts fizzling out. But you have your regulars.”

One such regular is senior Harry Choi. In my short time having Stevenson as my preferred study spot, he has been a familiar figure—sometimes, he’s got his head buried in a textbook and other times, he’s furiously typing away at a laptop. All the time, he’s more than happy to direct me to the most convenient vending machines.

In a first-year final project where the task at hand was to examine differences between “spaces” and “places,” Choi discovered that Stevenson had actually been built to encourage social interaction. This is evidenced by several factors—the open layout, the shortage of desks meant for just one person, the lack of strictly-enforced food and drink policies—but still, any time you walk into the room, you can hear a pin drop: students are using the space however they want. Such self-agency, and willingness to be creative with one’s own routines, is integral to any fruitful time spent at a library like this one.

“At one point, I would basically roll a whiteboard into that space (the opening of the cubicle)—because, you know how it’s kind of open?—and I’d have, like, a little room in there,” Choi said. “It was shocking. It was sublime. I definitely have a lot of memories, spending my time there.”

Of the numerous memories Choi recounted with me, some included a wholesome Christmas-season study session with first-year friends, a DIY modernist sculpture made of a textbook stack and a lemon and a fateful night spent both memorizing a difficult poem written in old English and preparing for a biology exam. In the minds of many, Stevenson does not play host to such positive recollections: instead, it was where they failed that chemistry test. It was where they overslept after an all-nighter and missed that midterm. It was always the living embodiment of bad news.

Stevenson Library may not be seen in the best light for reasons like these, but some mentalities better overcome such hardships than others.

“Stevie has a special place in my heart,” Choi said. “In retrospect, could I have made better life choices? Could I have adopted better studying habits? All that stuff—yes, yes, yes. But also, that’s how you learn. And for me, Stevenson Library is where I’ve made those mistakes and learned from those mistakes.”

When all is said and done, Stevenson Library’s all-nighter culture—and the act of pulling all-nighters in general—is something that, for as much productivity as it offers, should always be a last resort.

“Speaking for myself, I get mixed emotions when I see a student struggling to stay awake,” English Professor Rachel Teukolsky, who is teaching an English Honors seminar this semester, said in an email to The Hustler. “I feel slightly hurt that the student isn’t engaged with the conversation, but I also try to have compassion because I realize that the student probably has a lot going on.”

Oftentimes, too, sleeping can be just as productive—if not more so—as the allure of the hustle.

“Looking back, I strongly recommend avoiding all-nighters if you can,” Teukolsky said. “It’s always better to get even two or three hours of sleep rather than pushing through. Sometimes when you’re working while overtired, you’re not really being productive anymore. I actually think you can get more done by sneaking a few hours of sleep, and then waking up to return to your project. Also, in today’s pandemic environment, remember that lack of sleep depresses your immune system. You want to keep yourself healthy!”

As for me, navigating the productivity/sleep deprivation trade-off is something that I have had ups and downs with in my few weeks on campus. But as we all brave our separate adventures in figuring this thing out—whether at Stevenson Library or elsewhere—let’s make sure we’re at least squeezing in that five-hour window to eat and sleep before getting back on the 19-hour study grind.