Stellar performances from Shears, Sargent and Davenport were not enough to lift Vanderbilt in the final round against Arkansas. 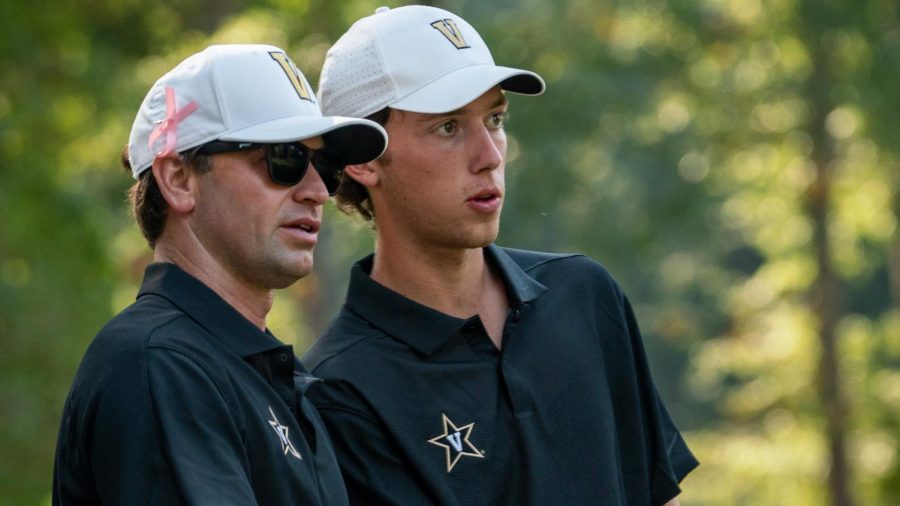 Vanderbilt competed in the 14-team SEC Match Play tournament from Oct. 10 to Oct. 12 at Shoal Creek Golf Club in Birmingham, Alabama. No. 15 Vanderbilt narrowly lost to No. 7 Arkansas 3-2 in the final round of the event.

Vanderbilt faced off against the South Carolina Gamecocks in the quarterfinal round after receiving a first-round bye. All five student-athletes had impressive performances, winning all their matchups. Gordon Sargent led the team with a 5-&-4 victory.

“Everybody did a good job sticking to their plan,” senior Michael Shears said. “We did a good job focusing on the golf course and not getting caught in beating our opponents.”

“It’s so important to stay in the moment, trust your routine, have faith in your teammates and have some fight,” head coach Scott Limbaugh said.

The Commodores’ solid play led to an opportunity to face the Arkansas Razorbacks in the final round. Arkansas was a familiar opponent for Vanderbilt, as just six months ago, Vanderbilt defeated the Razorbacks in the 2021 SEC Championships. Arkansas came out with intensity and bested Vanderbilt 3-2. Cole Sherwood and Shears both put up strong 4&2 wins, but it wasn’t enough to propel their team over Arkansas. Over the weekend, Shears posted a 3-0 record, while Sherwood and Davenport were 2-1 individually.

Shears has been a constant presence for the Commodores since he came to West End three years ago. His steady play resulted in an undefeated performance over the weekend. Shears believes his game has elevated due to improvements he’s made with his short game.

“I’m getting the ball up and down in places I never was before,” Sears said. “I’ve put some pressure off my ball-striking as my short game has been helping me.”

Although Vanderbilt fell just short in the tournament, there were positives and areas to improve upon based on their performances.

“You have to take the positives from the tournament,” Shears said. “We need to build on the little things we did well and continue to work on the things we need to improve on as we prepare for the last tournament of the year.”

The Commodores hope to finish their fall season strong in their final tournament of the season—the Williams Cup—which will be played from Oct. 25 to Oct. 26 at the Eagle Point Golf Club in Wilmington, North Carolina.