A hectic Week 6 in College Football marked the end of Alabama’s 680-day win-streak, leaving Georgia as the only remaining undefeated team in the SEC. 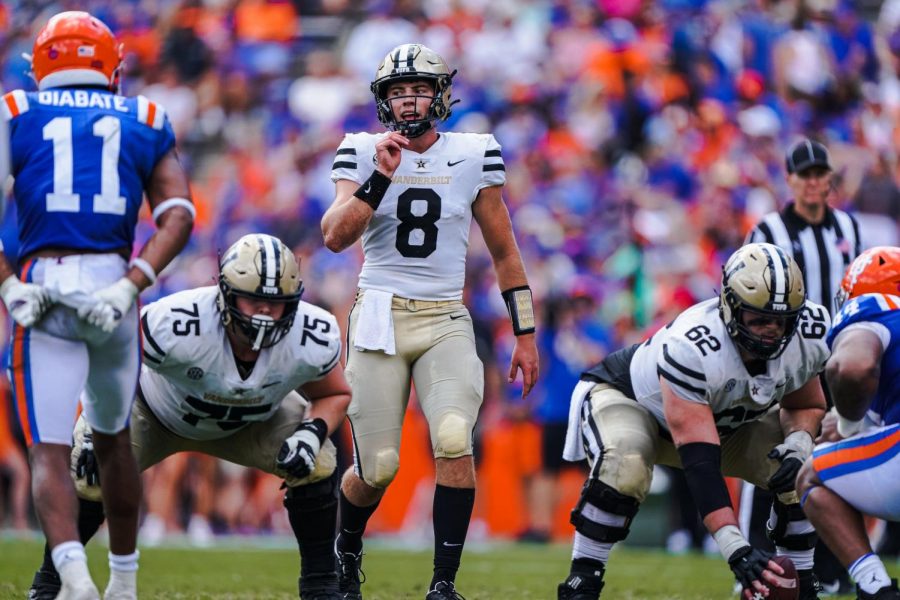 Ken Seals prepares to take a snap against Florida on Oct. 9, 2021. (Vanderbilt Athletics)

It seems as though Tennessee has finally found their starting quarterback after experimenting with Joe Milton to start the season. Hendon Hooker’s three-touchdown performance against South Carolina last week puts him at 13 touchdowns and only one interception on the year. Along with Hooker, Tennessee running back Tiyon Evans has been on a tear this season, averaging 6.7 yards per carry (second-most in the SEC). Evans also contributed 275 yards and four touchdowns in his previous two outings. The Volunteers, who have outscored their previous two opponents by a score of 107-44, will look to ride their momentum into a key matchup in Knoxville against No. 13 Ole Miss.
13. South Carolina: 3-3
South Carolina went 2-8 last season with an all-SEC schedule, and they have not looked much better this year. They have beaten three non-SEC teams this season and they are fresh off an embarrassing 45-20 loss to Tennessee. They have suffered from inconsistent quarterback play—neither of their quarterbacks have a completion percentage over 60 percent—, a defense that cannot get stops and a rushing attack that has averaged just 98 yards per game in SEC play. This Saturday they take on Vanderbilt, likely the last game they will be favored in this season. A loss could signal a disaster within the program.
14. Vanderbilt: 2-4
It’s looking like Vanderbilt is well on their way to another winless season in the SEC after a demoralizing 42-0 defeat against No. 20 Florida. If there’s any solace for Vanderbilt fans, it’s in the fact that the score doesn’t tell the full story. The offense moved the ball down the field on a few of their possessions, but two missed field goals and an overturned touchdown in the first half held Vanderbilt scoreless. On the other side of the ball, the defense came away with two interceptions, marking their second straight game with two takeaways. Vanderbilt will aspire to get their first points against an SEC team this week as they travel to Columbia this weekend to take on South Carolina.