The national runner-up Vanderbilt Commodores will play a pair of games against North Carolina and Richmond before returning home for the annual Black and Gold series. 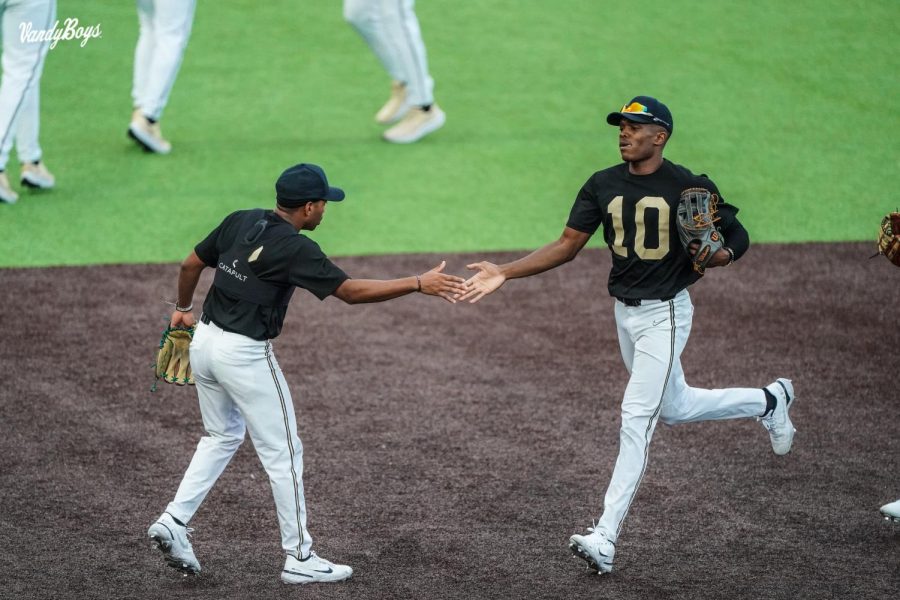 Vanderbilt baseball as photographed during its fall practices. (Vanderbilt Athletics)

Before the winter chill arrives in Nashville, the defending national runner-up Vanderbilt Commodores and head coach Tim Corbin have been hard at work in offseason preparation.

Coming off a devastating loss to rival Mississippi State in the 2021 College World Series, the Commodores are back to work in preparation for a slate of five fall contests. The VandyBoys will first head to North Carolina this coming weekend for games against North Carolina and Richmond before returning home next weekend for their annual fall Black and Gold series beginning Oct. 22.

“Playing deep into [last] season is a push physically and mentally but that doesn’t have anything to do with right now,” Corbin told the media on Tuesday. “Now guys are in a good state of mind.”

Although Corbin is still manning the dugout, there are many new faces around the Commodore baseball program—and a handful of notable departees. But with the second-ranked 2021 recruiting class in the country according to Perfect Game, the VandyBoys have retooled ahead of another run at the College World Series.

This year’s gear-up will look slightly different than last year’s considering the impact of the COVID-19 pandemic. With a fuller offseason and the team’s first fall baseball since 2019, Corbin and the VandyBoys are excited to kick off a fall slate of games in order to build confidence and hone routines.

“Playing experience somewhere else, playing on grass and dirt—I think it’s a great opportunity for the kids just to get away from campus for a couple of days and put a couple of lineups out there and see what they’re capable of doing in the short term,” Corbin said. “I just want them to have the opportunity to learn how to use a hotel, learn how to travel in an airplane, do the small things that do matter when you’re away from campus.”
A New-Look Rotation
At first glance, the obvious difference between this year’s team and last year’s team will be the pitching rotation. Corbin lost a pair of Vanderbilt greats in Kumar Rocker and Jack Leiter this offseason to the MLB Draft. Relievers Luke Murphy and Hugh Fisher have also moved on to the big leagues via the draft.

With those four departed, a large chunk of work is available to the VandyBoys’ younger hurlers. But the remaining pitchers on staff have combined for just 29 career starts and injuries to a number of key rotational pieces will still linger into the spring.

On Tuesday, Corbin confirmed that Sam Hliboki, who appeared in nine games last year before needing Tommy John surgery, and Michael Doolin, who received Tommy John surgery early in the 2021 season, are both still working their way back, but that Hliboki will likely miss at least part of the upcoming spring season. The Commodore skipper also confirmed that Ethan Smith, who has appeared in 31 games in the Black and Gold, is no longer with the program.

So where will Corbin turn for weekend starters? Well, now-sophomore Christian Little figures to be a staple in the weekend rotation. Little will likely team up with Patrick Reilly to lead the Commodores’ SEC pitching staff.

Reilly appeared in 16 games last season—starting seven of those—while posting a 4.98 ERA and flashed even more potential this summer in the Cape Cod league. The sophomore threw 10 innings over two outings while not surrendering a single run and striking out 10 for the Orleans Firebirds.

“He’s progressing. He’s going to be put in a situation that was different than last year,” Corbin said of Reilly. “He’s a kid that throws the ball well, he can spin the ball well and he’s competitive. He’s just got to get out there in more situations where he’s starting the ballgame.”

Staple relievers Chris McElvain and Nick Maldonado also return to West End for their junior seasons after appearing in 22 and 28 games respectively. Corbin said that, in addition to Doolin and Hliboki, both are not currently active for the fall.

But the skipper does boast a number of other potential young starters. Miles Garrett, who threw 9.2 innings last season, figures to be in line for a larger workload and even freshman Carter Holton could see the mound early this season.

“[I’ve seen] confidence, strikes, athleticism off the mound, good arm, low maintenance [out of Holt]. I don’t even know he’s here till he gets on the mound,” Corbin said. “When he gets on the mound you feel when he’s not, I couldn’t even tell if he was here which is a great compliment to a kid. But I like what he’s done up to this point, he’s savvy. He’s got savvy and confidence.”

While positions within Corbin’s rotation will surely not round out until the spring, the VandyBoys’ fall slate will give several pitchers a chance to earn starting and relief roles.
A Catching Situation to Monitor
Arguably Vanderbilt’s most interesting position battle this season will happen at the catcher position. With both CJ Rodriguez and Maxwell Romero Jr. gone—the former to the MLB Draft and the latter to the transfer portal—Corbin will have to get creative with his pitch-callers.

A number of different players have been taking reps behind home plate this fall, including Dominic Keegan, who came to Vanderbilt after formerly playing catcher, sophomores Jack Bulger and Alan Espinal and freshman Sam Hunt.

“[The catchers are] learning. Dominic just has to get back there and get more reps and we’ve got Espinal who’s learning too—he’s got some tools though. Bulger is just coming back so he is probably just a week into it,” Corbin said. “They’re just going to be learning on the run, they got to get used to this staff and they just got to play.”

Any of the four could be in line for time behind home plate in the Commodores’ fall series, but each brings a bit of a different background.

Whether he is catching or at first base, Keegan will surely be in the lineup from day one this season. The senior led Vanderbilt in average (.345) and RBIs (57) last season. Bulger appeared in 50 games as a freshman last year, logging 43 hits mostly from the outfield. Espinal tallied just five at-bats in his freshman season and Hunt, obviously, has not appeared in a game yet.

Keegan and Bulger have a background catching but have not done so since high school, whileEspinal and Hunt came to Vanderbilt as catchers. All figure to get a shot behind the mask early this season as Corbin continues looking for his go-to option.
Versatile Set of Upperclassmen
With Jayson Gonzalez, Isaiah Thomas, Leiter and Rocker all gone, a number of new leaders have begun emerging this season. Perhaps the loudest of which has been Tate Kolwyck, who enters his senior season after batting .290 over 43 games last year despite suffering a midseason wrist injury that certainly impacted his play.

But after a full offseason, the versatile infielder is playing just about anywhere for Corbin thus far. He took ground balls at first base on Tuesday and has logged time at both second base and shortstop over his career at Vanderbilt.

“Everybody on this field—when you come to Vanderbilt you do what Corbs wants you to do,” Kolwyck said. “You’re a team guy, you want to come here and help the team out any way you can so it’s fun. I personally love moving around the field. I feel like I’m at my best when I go into different spots and mix some stuff up.”

Another handful of players who will be moving around the diamond are Spencer Jones, Javier Vaz and Troy LaNeve.

Jones finished last season hitting as well as he has in a Vanderbilt uniform. He ended his season batting .274 and had a strong showing in the Cape Cod league this summer, notching 29 hits in 94 at-bats with the Brewster Whitecaps. Jones spent most of his time in the outfield last year but will be in line for some work at first base as well, according to Corbin. The head man also confirmed that Jones will not be on the mound at all despite being recruited as a pitcher.

Vaz made a name for himself as a highlight-reel outfielder and on-base machine throughout the 2021 College World Series. The former transfer finished his season with a .396 on-base percentage and was getting work at second base on Tuesday.

Finally, LaNeve was a midseason breakout player for the Commodores last season, but slowly regressed as the postseason wore on. He did rip a number of key extra-base hits down the stretch last year and has been working at both first base—a position he has experience playing before Vanderbilt—and right field throughout this preseason.

“They just give us flexibility in case there is an injury, in case someone goes down, the ability just to move over,” Corbin said of his many versatile pieces. “We use so many examples of [that]—whether it’s Kiké Hernandez. He’s a hot name right now because of what he did [in the American League Division Series]. But that’s a kid who brings four gloves to the stadium with him, and when you do that, you create great value for yourself.”

Corbin also confirmed that shortstop Carter Young is progressing nicely from the shoulder injury he suffered late in the spring. He is taking ground balls and throwing but not yet hitting.

The Commodores will go to battle with UNC and Richmond this weekend before the Black and Gold series beginning Oct. 22.