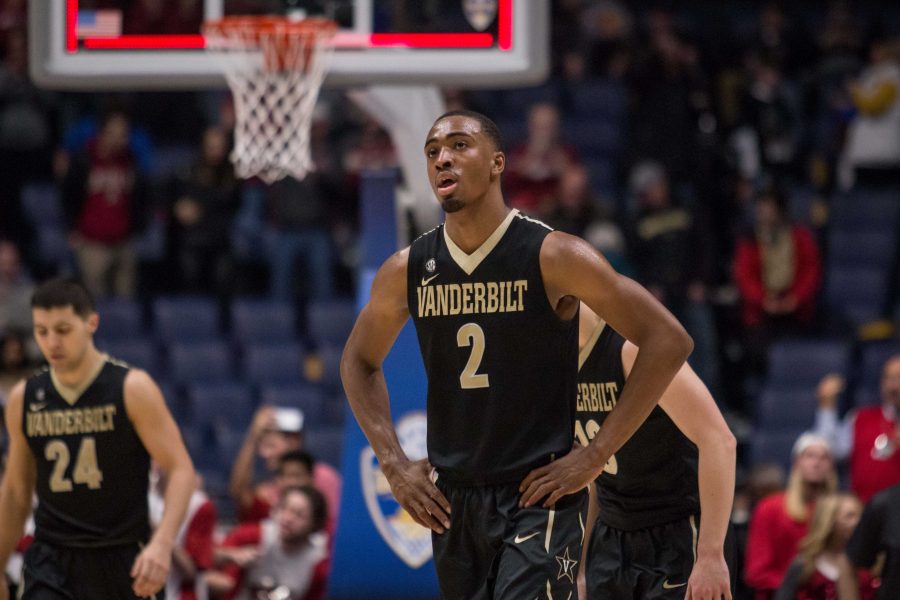 Joe Toye (2) and Vanderbilt as the buzzer sounded on the Commodores' SEC tournament semifinal defeat to Arkansas on March 11, 2017 at Bridgestone Arena in Nashville.

Vanderbilt entered Saturday’s SEC tournament semifinal against Arkansas riding a wave of confidence. The Commodores had won seven of their last eight games against a difficult schedule, and they’d moved from the outskirts of the NCAA tournament conversation to right in the thick of it.

None of that mattered. Vanderbilt missed shot after shot and got run out of the gym in the second half of a 76-62 loss. Here are five takeaways from the loss, as the 19-15 Commodores wait for the NCAA Selection Committee’s verdict on Sunday.

This might sound overly simple, but ultimately the loss came due to poor shooting from the Commodores. Vanderbilt hovered around 23 percent shooting from the field for much of the second half, a value that would have easily set a season low.

Luke Kornet uncharacteristically missed five open threes, and no one else had much more success. The quality of shots Vanderbilt took was mostly fine, yet no Commodore shot better than 50 percent from the field; Riley LaChance led the team with a pedestrian 12 points on 2-for-7 from the field. Shooting below 35 percent rarely results in a win, and the Commodores’ 30.4 percent contrasts with their 52 percent shooting in an easy victory at Arkansas on February 7.

“Basketball, sometimes the ball goes in, sometimes it doesn’t,” Drew said. “We really liked the looks. I thought all Luke’s looks were very clean; we want him to keep shooting those shots.”

Arkansas is known for its pressure defense, and the Commodores didn’t react well to it Saturday. Vanderbilt coughed up 15 turnovers, six of which came from point guards LaChance and Payton Willis. The ‘Dores haven’t been good against the press all year, but they needed to be in order to overcome their poor shooting. That didn’t happen.

The turnovers also led to 15 Arkansas points, and the Razorbacks ended up with a 67-56 advantage in shot attempts. Guards Jaylen Barford and Daryl Macon made things tough on the Commodore ball-handlers and finished in transition off of steals.

“We figured we had to come out and really kind of make the game chaotic for them, and, of course, they didn’t make shots,” Arkansas head coach Mike Anderson said. “… I thought the second half we really came out and our defense really turned up the pressure on Vanderbilt and gave us some easy opportunities, and we extended it at times, and we just disrupted tonight.”

Start of second half sealed the deal

Despite having played a mediocre first half, Vanderbilt found itself down only 35-31 at halftime. One could even argue the Commodores got better shots in the first period but failed to knock them down. Arkansas changed all that early on in the second, as the Razorbacks exploded offensively. The Hogs started the half with a 10-0 run, forcing Vanderbilt head coach Bryce Drew to burn two timeouts.

The timeouts couldn’t stem Arkansas’ momentum, however, as Macon, Dusty Hannahs and Manuale Watkins nailed three threes in short order to push the Razorbacks’ lead to 21 with 13 minutes left. It quickly became clear that Vanderbilt wouldn’t be mounting a comeback, and the rest of the game functioned as glorified garbage time.

“We knew the second half would be our half if we just kept running and executing,” Hannahs said. “We started off the half with a basket and Moses [Kingsley] had a dunk on the next possession. … We fed off of it and got stops, and that was ultimately what propelled us to the win.”

There are a number of reasons why no team outside the top four seeds has won the SEC tournament since Mississippi State in 2009. The cumulative effect of fatigue is one of those reasons. Coming off a grueling overtime win over Florida on Friday night, Vanderbilt had a quick turnaround for Saturday’s afternoon tip. Arkansas’ pressure forces opponents to expend more energy than normal when bringing the ball up the court, and LaChance readily admitted after the game to being “run down.”

Kornet played a season-high 44 minutes on Friday, and he didn’t appear to have as much energy defensively after the game’s first few minutes. By the time the second half rolled around, Arkansas was ready to widen the margin.

“Fatigue was a big factor for us,” Vanderbilt forward Joe Toye said. “Emotionally and physically, we’re kind of tired from the past three days.”

As ugly as the loss looked, the NCAA tournament selection committee emphasizes every year that teams’ overall profiles are what matter rather than individual games. Vanderbilt has played 34 games this season, and one bad one right at the end of the year is highly unlikely to relegate the team to the NIT.

Over the past few years, the committee has favored bubble teams from high-profile conferences with quality wins and strong schedules over mid-majors. Based on that track record, Vanderbilt will likely make the NCAA tournament over the likes of Rhode Island and Illinois State, assuming the former doesn’t earn the Atlantic 10’s automatic bid Sunday. No team has ever received an at-large bid with 15 losses, but it looks like Vanderbilt will be the first to do so.

“I think our guys have worked really, really hard to put themselves in position to be a part of [the NCAA tournament],” Drew said. “And with the schedule we played this year, with the teams that we have some wins over, we feel like if we go and we play well, hopefully we can stay there for a little while.”