Why we dream: The science behind mind-movies

The debate amongst scientists regarding the true purpose of dreams is heated, but it definitely won’t lull you to sleep. 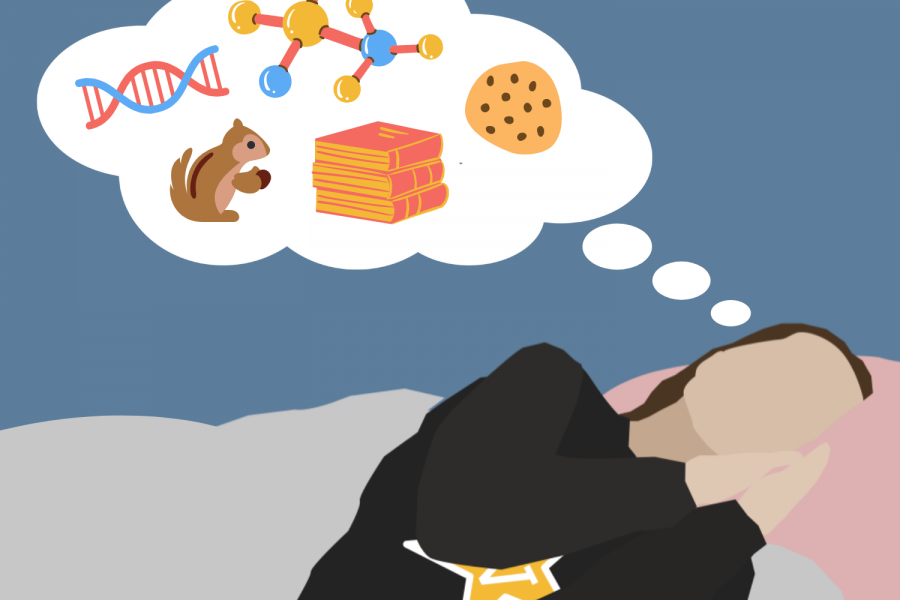 Students dreams give insight into the interworking of their minds.

According to Disney’s “Cinderella,” “a dream is a wish your heart makes,” and while that’s a beautiful sentiment, dreams are a little more complicated in reality.

“Why do we dream?” is an age-old question that has garnered significant attention in the fields of both psychology and neuroscience and is yet to be fully answered. In this article, we will explore leading theories on the subject and even some new research that attempts to answer the million-dollar question.

Psychologists refer to dreams as both auditory and visual hallucinations that occur during the sleep cycle—most commonly during the rapid eye movement (REM) stage of sleep. According to the information-processing theory, an important function of dreams is memory consolidation. Essentially, dreams help store and recall memories deemed as significant to the individual while simultaneously sidelining unwanted or unimportant ones. Important memories can be anything: from the organic chemistry functional groups you learned in class to your most cherished childhood memories.

First-year Matthew Yao experienced this very recently. In his dream, Yao rewatched the Chinese commercials he grew up listening to from his childhood to his adulthood. Though he no longer lives in China, he admitted to missing the nation’s culture and his time there, revealing its importance to him. Perhaps individuals who have had similar dreams are reliving moments of their lives that their brains find most valuable in an attempt to preserve them as the theory suggests.

Interestingly, this phenomenon is not limited to humans. By observing the firing patterns of certain neurons called “place cells” during sleep, scientists have discovered that rats dream about the locations they have explored in order to store and strengthen their memories of that area. The evolutionary implications of this discovery are remarkable, as they suggest that dreams are crucial to recalling valuable information. In line with Freudian psychological principles, other research suggests that dreams allow for an unconscious or subconscious expression of complex emotions, motivations and desires. Through such expression, an individual feels safe and empowered to sort through their multifaceted feelings; it’s a self-healing process.

The activation-synthesis model suggests yet another purpose for dreams. The psychiatrists who proposed the theory, John Altan Hobson and Robert McCarley, interpret dreams as a creative feat of the brain. During REM sleep, several structures of the brain involved in emotion and memory such as the amygdala and the hippocampus emit neuronal signals. The theory explains that dreams are the brain’s attempt to make sense of the seemingly meaningless firings by creating a narrative surrounding those neural impulses. Upon waking, the individual interprets the images of the dream as a story or—as I’d like to say—mini-movie.

First-years Zander Raycraft and Diego Garmendia both had recent dreams that may corroborate this theory. In both of their dreams, they pieced together images or experiences from their daily lives that were otherwise disconnected from each other and interpreted them as a story. For example, Raycraft recalled speaking to his father who did not actually resemble his father, attending chemistry class and even battling aliens all in the span of one dream.

“My dream was really weird because it was just a culmination of a bunch of random thoughts I had throughout the day coming together to make one central theme: friendship,” he said, echoing the hypothesis of the model.

Similarly, Garmendia said his dream was “dissociated” and “disconcerting,” though he recalled certain scenes from his dorm’s common room or Vanderbilt life.

“If anyone went through [my dream], it would be weird,” Garmendia said.

Altogether, the two seem to suggest that though dreams may evoke memories or pieces of information stored in the brain, their main purpose is not to consolidate but rather to stimulate for the sake of rationalization. This would account for the degree of randomness and disjunction that is often present in dreams.

But it doesn’t stop there. A relatively recent study conducted by Researcher Mikio Igawa highlights that dreams may serve a far deeper purpose as well: maintaining the visual system. The results of the study show that many areas of the visual system were stimulated and active during sleep, much like when the person is awake. Neuroscientists like David Eagleman deduced the strong possibility that dreams activate the visual system in order to prevent degradation at night and promote increased visual capabilities when the person is awake. Though no direct support can be provided to support this theory, interesting deductions can be made.

Both sophomore Lisa Yang and junior Abisola Lawal described their dreams to be centered around missing assignments or deadlines and school induced-stress. In their dreams, they often “see” said assignments and the specific details surrounding them with slight alterations to their situation in reality (e.g. an earlier due date). As the theory suggests, it is possible that the reason why both dreams are so centered around images is to activate the visual cortex to preserve it.

Though there is much debate over the role of dreams in a person’s life, one thing is clear: we still have much to uncover. Yet, every theory reveals that dreams play a unique purpose in the human brain, whether tiny or large. Next time you witness the marvelous cinematic feats of your brain, be sure to remember there is far more to them than what meets the eye.