Vanderbilt put together an impressive performance over the weekend against high-level competition from six schools. 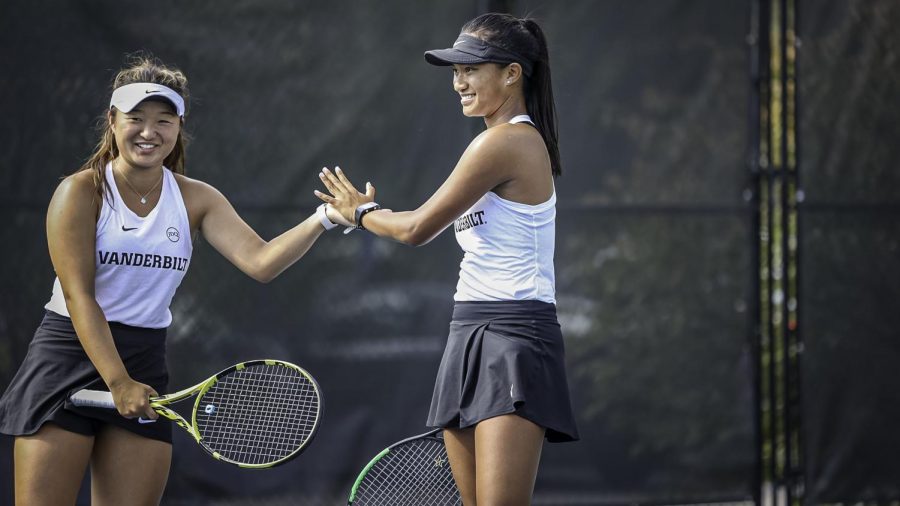 The Vanderbilt women’s tennis team dominated in their first home matches of the 2021-22 season with 15 singles and eight doubles match wins in the June Stewart Invitational this past weekend. The Commodores hosted Miami (FL), Iowa State, Kentucky and Illinois for the three-day event. A pair of Lipscomb players also made the three-mile trip over to the Vanderbilt Currey Tennis Center to play.

“I wanted to see competitiveness, good spirits, and committed tennis,” head coach Aleke Tsoubanos told the Hustler. “All of those boxes were checked over the weekend. We got better with each day which is something I like to see in these fall events.”

The Commodores started off the invitational on Friday with two doubles wins against the Kentucky Wildcats. Junior Marcella Cruz and sophomore Anessa Lee teamed up to win 6-2 and graduate students Yufei Long and MaryAnn Rompf also took care of business with a score of 6-4. The other two Commodore pairs fought valiantly against SEC opponents but fell just short: junior Dasha Kourkina and freshman Amy Stevens lost 4-6 and junior Anna Ross and sophomore Holly Staff came close in the tiebreak, losing their match 6-7.

Just after the Kentucky doubles matchups, the Commodores added four singles victories against the Illinois Fighting Illini. Staff and Long each prevailed in three-set battles—Staff winning against Illinois’s Kate Duong 6-4, 1-6, 6-4, and Long coming through against Kasia Treiber 6-4, 0-6, 6-1. Additionally, Ross (7-5, 6-0) and Kourkina (6-2, 6-1) won their individual matches handily in straight sets.

The Commodores continued their winning streak on Saturday with three singles victories against the Miami Hurricanes. Staff bent very little, taking her match easily (6-2, 6-2); however, Stevens and Ross fought through grueling three-set matches lasting over two hours. Stevens pulled away at the end, winning 6-3, 3-6, 6-3, while Ross was forced to a decisive third-set tiebreak where she edged out Miami’s Eden Richardson 7-2, taking the match 6-3, 1-6, 7-6.

Vanderbilt also picked up singles wins by Lee against Lipcomb’s Kate Popova 6-3, 6-1, and by Cruz against Iowa State’s Christin Hsie 6-3, 4-6, 6-4. Long and Kourkina each lost to Miami players in straight sets.

As far as doubles action on the second day, Tsoubanos’ team put together a string of wins to add to their singles success. Ross and Staff bounced back from their disappointing doubles loss on Friday to beat Illinois’s Duong and Frazier 6-2. Kourkina and Stevens also rebounded and won their matchup with Lipscomb 6-3. Thirdly, the Illini duo of Yeah and Heuser proved no match for the Commodore pairing of Cruz and Lee as Vandy won 6-2.

In the heat of the Sunday sun, the Commodores shined brightest, displaying near perfection on the last day of the invitational. To start the day, Ross and Staff and Long and Lee both took care of Miami duos—6-2 and 7-5, respectively—and Kourkina and Stevens handled Illinois’s Casati and Ingle 6-4. Cruz and Rompf’s 4-6 close loss to Tahan and Khoden of Miami was the only blemish on the record in Vandy’s 10-match day.

Tsoubanos spoke highly of Ross and Staff, who together are currently ranked No. 9 in the nation in doubles.

“We are looking for them to step up as leaders this year. They can have a really good positive spirit when they want to, which is very helpful to teammates during matches,” the head coach said. “When they’re playing really well and they’re together [for doubles], they’re one of the best teams in the country.”

The team stepped up to the challenge against solid tennis programs who came to Nashville this weekend. While Tsoubanos was very pleased with the results of the June Stewart Invitational, she also made sure to say that it is still early in the season with fall events like these being most crucial toward the growth and development of the team rather than just wins and losses.

The Commodores hope to carry their positive momentum into their next matches which will be held at the ITA Regional Championships in Murfreesboro, Tennessee, starting on Thursday, Oct. 21st.