Major Jackson, Krista Knight and Stephen Ornes addressed their approaches to making connections with others through poetry, theater and science. 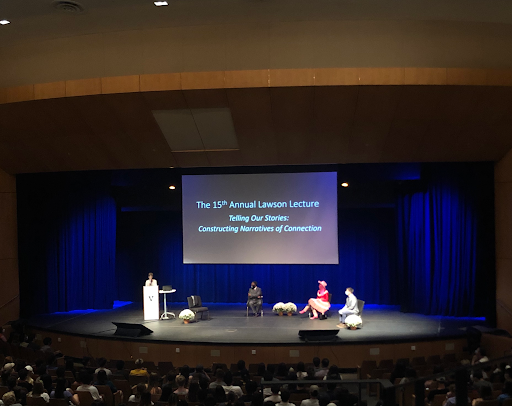 On Oct. 10 from 4-5 p.m. CDT at Langford Auditorium, Vanderbilt held its 15th annual Lawson Lecture—entitled “Telling Our Stories: Constructing Narratives of Connection”—for the Class of 2025.

Dean of the Commons Melissa Gresalfi explained in her introduction that the lecture was named after Rev. James Lawson, who was expelled in 1960 from Vanderbilt after conducting peaceful sit-ins to protest discrimination against people of color in Nashville.

“Vanderbilt in the 1950s was not the institution we know today,” Gresalfi said.

Gresalfi said panelists were chosen to speak about their works and narratives that promote connecting with others in mutually beneficial ways.

“Storytelling is an integral part of every culture and a key way of how we communicate,” Gresalfi said. “It is because of the importance of stories that we selected a memoir for our campus reading.”

Jackson began the lecture by speaking about his work as a poet and about “myths” that may deter individuals from valuing poetry as an avenue for meaningful storytelling. He also encouraged the audience to create and consume poetry that may challenge their ways of thinking.

“Readers must be willing to enter into the unknown and unfamiliar, to grow beyond our parochial world,” Jackson said.

Knight continued the discussion by sharing her own experiences in finding connections within the world of theater, describing a virtual theater project she created during the COVID-19 pandemic.

“When the pandemic happened, theater couldn’t happen,” Knight said. “But, like a cockroach, it won’t die.”

Knight’s project was a six-part series called “Crush” that she released on various online platforms including Facebook and YouTube. It was written from the perspective of the cockroach on her wall, which she described as her only direct audience member during quarantine. During the lecture, Knight explained the process of creating virtual reality (VR) puppets and played several clips from “Crush,” which has since won the Broadway On-Demand Film Festival.

Knight ended by encouraging audience members to pursue their passion projects, even in the face of difficulties.

“You are a few YouTube tutorials away from telling your own story,” Knight said.

Ornes was the final speaker at the lecture and talked about his experience as a scientific writer. He said that he aspires to make difficult ideas more manageable to his readers.

“We can build connections in our stories by humanizing them,” Ornes said. “Getting and sharing good information is a life and death issue right now.”

Ornes gave personal examples of adding real-life narratives to scientific writing. One example was Ornes’ inclusion of Michael McQuilken’s story, who watched his brother get struck by lightning when explaining lightning to young readers. Ornes said that science writers are held to a high accuracy standard and should convey truth to others through scientific stories that involve real people.

The lecture concluded with a brief question-and-answer session. The audience received note cards at the beginning of the lecture and were encouraged to write questions for the panelists.

Sophomore Riddhi Singhania, a VUceptor, said she appreciated how the audience was able to attend this year’s lecture in person.

“As a first-year student last year, this lecture was online, so I had a really different view on it,” Singhania said.

She said the diversity of inputs from the panelists resonated with her and that she enjoyed hearing about the use of storytelling as a form of connection from the varying viewpoints of poetry, theater and science.