We sat down with keyboardist Ryan Hater to talk creative influences, the band’s latest album and their recent performance at the Exit/In. 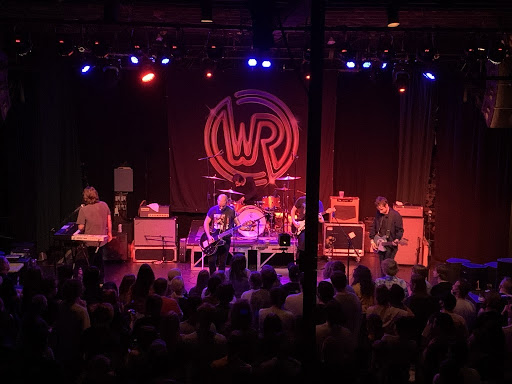 White Reaper from upstairs at the Exit/In, as photographed on Sept. 28, 2021. (Hustler Staff/Sophie Edelman)

White Reaper is the modern quintessential garage punk band. Hailing from Louisville, Kentucky, the band has released critically-acclaimed rock albums since 2015. New listeners may recognize the popular track “Might Be Right,” which currently sits at 12 million Spotify streams. The track is from the band’s latest release, “You Deserve Love,” their first album to break through Billboard’s alternative and rock charts. Production for the album was done by Nashville native producer Jay Joyce.

I had the opportunity to sit down with the band’s keyboardist, Ryan Hater, to discuss musical influences, his approach to the creative process, and his excitement to perform at Nashville’s iconic Exit/In on Sept. 28.

Hater accredited many legendary artists as part of the band’s influences.

“It ranges from Metallica to Van Halen to The Killers, from older bands to newer bands to pop stuff like The Backstreet Boys, Charlie XCX, and Swedish Pop,” Hater said. “We just like to listen to stuff and take it all in, and that molds you as a listener and then as a creator after that.”

Regarding their latest release, Hater stated that the band drew from all of the aforementioned sources for inspiration during their collaborative creative process.

“We’re all basically family, and we just trust each other and work together really well. We’re all our own worst critics, so nothing is making it past the cutting room floor if it’s not exactly what it needs to be,” Hater said. This perfectionist attitude shines through in the careful choices and artistic mastery on “You Deserve Love.”

Additionally, Hater revealed that Nashville is one of his “favorite places to play.”

This definitely seems true, based on the band’s high-energy performance at Exit/In. The band’s performance was framed by the venue’s signed portraits of various musical legends that have also graced the stage. Lead vocalist and guitarist Tony Esposito ran through the band’s hits at lightning speed, keeping the crowd headbanging and moshing throughout the entire performance. “Might Be Right,” a song about a relationship that’s fallen on shaky grounds, was the hit of the night, drawing the most singing along from the excited crowd. The band’s skillful blend of rock musicality and punk vocals meshed well, loud enough to back their attitude but with soulful lyrics that kept listeners wanting more.

Overall, it was a lifting performance for a Tuesday evening, and we’ll definitely be adding the band to our scream-it-out playlists.