Pop Culture Psych: Can we trust a free Britney?

Is Britney Spears really who we think she is? Following the recent end to the stars’ conservatorship, personality psychology can give us a glimpse into what we can expect from a free Britney. 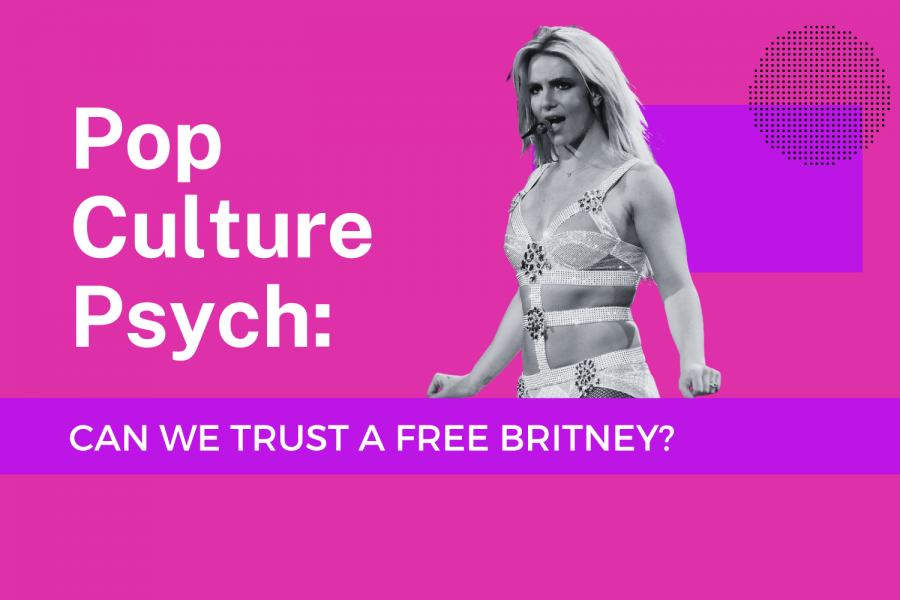 What can we expect from a #FreeBritney?

Ever wondered what’s going on in celebrities’ heads? The Enneagram, a personality system that attempts to explain how certain human behaviors form, can help us “read” people and situations from the inside out. I’ve taken it upon myself to use this system to conduct psychological evaluations of our favorite celebrities—and some campus hotshots—to bring you all the best insights into the human mind and get you one step closer to the one thing we all secretly yearn for: reading minds. Try not to think about it too hard.

If you were worried about a freed Britney, now is the time to panic. This Thursday, Sept. 30, to the rejoicement of #FreeBritney stans across the nation, a Los Angeles judge ruled to end Jamie Spears’ 13-year conservatorship over his daughter’s finances. The arrangement was made in 2008 under the pretense that Spears was incapable of managing her own money due to drug addiction and her 2007 mental breakdown. However, our recent hope for liberation of Britney, B**ch has raised a controversial question: Can we trust a free Britney?

A childhood star or not that innocent?

Spears’ talent and work ethic have set her apart since her days on the Mickey Mouse Club in the 90s, when she performed to keep her family out of poverty. Still, the public has always been skeptical of her conscience and reliability, and we often see contradictory images of her in the media that make it difficult to discern a singular judgment. Just consider when she claimed to be waiting for marriage while Justin Timberlake bragged about having sex with her, or today’s debate over whether she has overcome her drug problem sufficiently to be freed from her father’s oversight. The Enneagram reveals why these confusions persist.

Britney seems to be a 6 or 7 on the Enneagram. Although similarly motivated, these two types differ vastly in their intentions and reliability. The 6, the Questioner, is motivated by fear and seeks security through humor and loyalty, while the 7, the Adventurer, is also motivated by fear, but suppresses it to instead seek pleasurable experiences and avoid pain. Think of it this way: a 6 is the best co-worker you’ve ever had, while a 7 is the kid who skips class every day to party. The public can’t seem to figure out which Britney is—a confusion that feeds controversy after controversy.

After reading about Spears’ childhood and watching her old episodes of Carpool Karaoke (okay, maybe that part was just for me), I made two discoveries about the pop star. First, Spears grew up in a poor family, and her parents had a volatile relationship that would often give way to screaming matches. According to a family friend, Britney initially feared such confrontations, but later became immune to them and even fought back. This is classic 6 behavior—she dealt with fear by learning to productively cope with it—while the stereotypical 7 may have just thrown a party as a distraction.

Secondly, Spears’ rise to fame would’ve been difficult had she been a 7 and not a 6. Britney has exhibited a phenomenal work ethic since her childhood. In “Framing Britney Spears,” the documentary about her life, several crew members testified to her dedication in the studio and in preparing for performances. In 2013, will.i.am expressed how impressed he was by the record speed with which she completed projects in the studio.

We’re all familiar with the disquieting images of Britney Spears in 2007, when she shaved her head and bashed in artist and director Daniel Ramos’ car with an umbrella, overwhelmed by the paparazzi hounding her. This outburst was likely a product of Spears’ Enneagram “wing” and the natural patterns of “integration” that she undergoes as a 6.

Spears’ combination of responsibility and impulsivity indicate that she is likely a 6 wing 7. “Wings” are Enneagram types linked to your main type that influence your behavior but make up a less significant portion of your internal motivation. For example, I’m an 8 wing 9, meaning I’m often calm and compromising like a 9, the Peacemaker—but I’m also ambitious like an 8, the Protector, and would never approach my broader life goals like the more complacent 9.

Britney has shown the reckless, fun-driven side of a 7 when she impulsively started a New York City restaurant and walked naked around set in front of her crew. But, given what we know about her responsible childhood and subsequent rise to fame, this recklessness likely doesn’t influence how she structures her life as a whole.

So, what caused Britney’s idiosyncratic, unreliable behavior in 2007? Every Enneagram type undergoes patterns of “integration” and “disintegration” when experiencing personal growth and reversion, respectively. The loyal 6 disintegrates into an attention-seeking 3, the Performer, in times of stress, explaining her erratic behavior. The paparazzi drove Spears to a breaking point. So, she shaved her head and bashed in a car in defiance of her “good girl” image. Additionally, her 7 wing probably influenced her relapse to drug use as she sought to experience pleasure and escape pain.

Back to Britney, B**ch: should we #FreeBritney?

Britney Spears’ personality results in an ambiguous public image, clouded by both virtue and vice. This image is undoubtedly further tainted by the bias with which our society views women; because we expect men to be irresponsible, we let them maintain control over their lives as they indulge in drugs and sex. For women, on the other hand, society has set a higher bar, latching onto any missteps as an excuse to deprive them of their autonomy. This is unacceptable, and we need to become aware of our biases in order to root them out.

Further, this Enneagram analysis indicates that Britney might be perfectly capable of managing her own money and of having her conservatorship ended. After all, she grew up a loyal and hard-working 6, supporting her family, grinding in the studio and insisting on having a drug-free crew.

An analysis of the Princess of Pop herself leaves me confident that the Los Angeles judiciary—and millions of Britney stans—may well have ruled correctly.

Give Britney liberty or give me death.