Vanderbilt soccer stunned in overtime by No. 7 Arkansas Razorbacks, 1-0

A last-minute loss against a ranked team never feels good, but it’s not all negative for the Commodores. 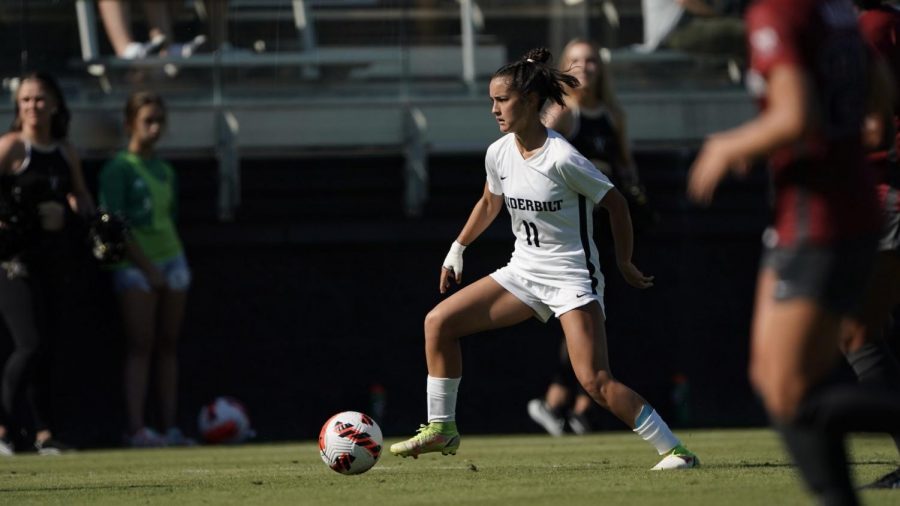 Vanderbilt's Amber Nguyen attacks the ball in a game against Arkansas on Oct. 10, 2021. (Vanderbilt Athletics)

After 92 minutes of physical play, the Vanderbilt women’s soccer team suffered a 1-0 overtime loss at the hands of the No. 7 Arkansas Razorbacks. The Razorbacks not only handed the Commodores their sixth loss of the year (second in conference play), but snapped a three-game Vanderbilt win streak as well.

Arkansas opened up in an intensely physical mark-up press that pressured the Commodores into some errant passes. The Commodores did, however, find their groove around the 5-minute mark, getting the ball to their center midfielders and working it to the sides for a cross. They drew a free kick, almost completed a through ball and crossed a ball into the 18 on three successive possessions.

On the defensive side, Vanderbilt was able to contain Arkansas’s frequent lobbed through balls throughout regular time, including a great stop by junior Maya Antoine at around 15 minutes in.

30 minutes into the contest, Arkansas cooled down with its press, instead placing eight or nine players in their own half. This effectively slowed down the Commodores, keeping them away from the 18-yard box for about 15 minutes.

The end of the first half was dominated by Arkansas. After a yellow card on Vanderbilt junior Alex Kerr, the Razorbacks maintained most of their possession on the Vanderbilt half, capped off by an Ava Tankersly header that just sailed over the top-left side of the crossbar on a corner kick. Vanderbilt sophomore Tina Bruni had the cleanest look of the half from just outside the right corner of the 18-yard box, but it was saved by Arkansas keeper Hannah Warner.

By halftime, the game remained scoreless as both teams stayed true to their defensive focus, limiting open looks and breaking up through balls. Arkansas led in shots-on-goal by a 4-1 margin, but everything else was dead even. Both sides also recorded one yellow card each. Arkansas earned theirs in the 29th minute while Kerr recorded hers five minutes later.

Arkansas started the second half much like they did the first, with high intensity and immense pressure. Vanderbilt stayed composed, though, as their defense was able to save back-to-back shots on goal off a corner kick from Arkansas in the 51st minute. Five minutes later, Arkansas almost converted on another corner kick, with the volley from Sophia Aragon hitting the bottom of the crossbar and bouncing straight down, just outside the goal line. Vanderbilt midfielder Maddie Elwell, said “anything you can do, I can do better” by also hitting the crossbar on the ensuing possession.

Both Kate Devine and Hannah Warner also made their presence felt early in the second half with saves and through-ball stops galore. Kate Devine, in particular, had a fantastic game. She racked up seven saves and was in constant control of the pace of the game.

“Kate’s only a sophomore so we’re excited about her,” head coach Darren Ambrose said of his keeper. “This is just her first real season, she sat out all of last year until April with COVID[-19] issues and she’s a big part of our future. She’s confident, she’s the best goalkeeper in the league with her feet, she’s a great shot-stopper and she’s learning all the time. The scary thing is she’s gonna get better and better.”

The action simmered down for around 15 minutes until the 80th minute, when a Vanderbilt offside woke up the crowd as they hurled boos towards the refs. The crowd then erupted when Raegan Kelley torched her matchup down the left sideline and got to the middle of the pitch. She was stopped by a Razorback defender who ricocheted the ball back to a wide-open Maddie Elwell, whose shot just missed the left post. Though the shot didn’t change the score, it added some energy to the fans.

After an overshot from Vandy and an inaccurate corner kick from Arkansas, regulation ended still tied at zero. Though a more offensive half than the first, the defenses of both teams continued to step up in crucial moments, limiting good looks and making plays when needed.

Overtime didn’t last long as Arkansas senior Parker Goins raced towards a 50/50 ball, broke away from the defense and put a perfectly placed shot at the bottom right of the net in the 92nd minute, scoring the golden goal and ending the game at 1-0 Razorbacks.

Even with the loss, Coach Ambrose remained positive about the performance of his team.

With the golden goal, Vandy drops to 6-6-2 and Arkansas improves to 11-2-0.The Commodores will look to recover from this heartbreaking loss against Ole Miss next Sunday, Oct. 17, at 12 p.m. CDT.