Beta Theta Pi returns to Vanderbilt after disbanding in 2015

The advisors of Vanderbilt’s Beta chapter are working with the university to prevent the risk management violations that led to them dissolving. 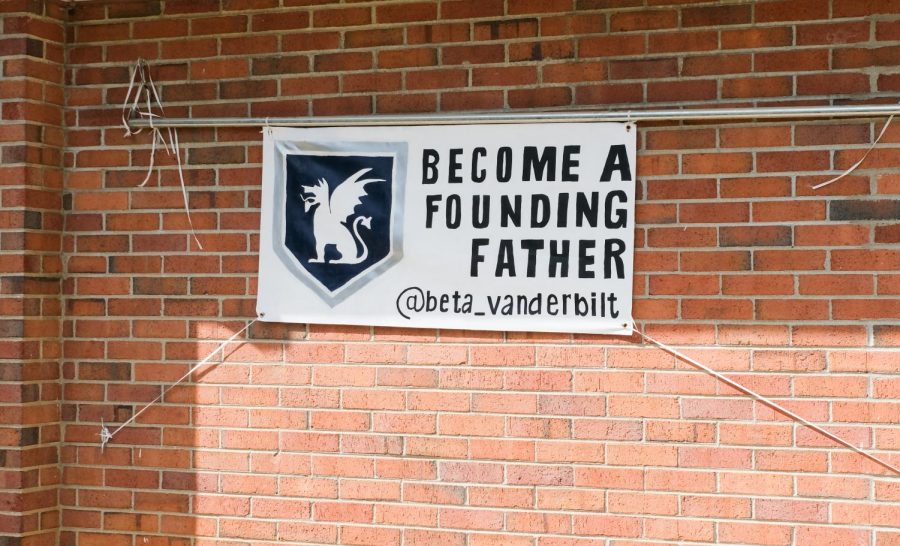 An article in the Spring 2016 edition of The Beta Theta Pi magazine specified that these allegations involved alcohol and drug use. It also emphasized the chapter’s wish to disband rather than address their “ongoing behavioral problems” with Vanderbilt and the Beta national fraternity.

“Recent examples of the chapter’s disregard for safety occurred during its spring 2015 ‘Farm Party,’ which included kegs, allegations of cocaine use and deception by the undergraduate leadership during the university’s investigation,” the article reads. “To quote one of the member’s social media posts that included a picture of the chapter in front of the chapter house with hands raised and middle fingers prominently positioned, ‘We’ll go down like the band in Titanic; well-dressed, affluent, and on our own terms.’”

Torrey said an agreement was originally made between the national fraternity, the chapter alumni association and the university, allowing Beta to return to Vanderbilt in 2020. However, this reestablishment was delayed until the Fall 2021 semester to allow for recruitment to happen in person, according to Torrey.

Ethan Farner, who is serving as Beta’s chapter development consultant at Vanderbilt, said that he and other Beta national staff are working to prevent the previous risk violations from reoccurring.

“The prior members of the Beta Lambda Chapter suffered from a culture of entitlement and defiance of fraternity and university risk management policies,” Farner said in an email to The Hustler “We value our campus partners and are working closely with them now and will continue to do so in the future to ensure a positive future for Beta at Vanderbilt.”

In the same way, Farner said that the Abolish Greek Life (AGL) movement at Vanderbilt has influenced the chapter’s diversity and inclusion goals. Since Beta is new to campus, Farner claimed that the chapter has a unique opportunity to address some of the issues with Greek Life brought to light by the AGL movement, including “exclusivity,” “hazing” and “entitlement.”

“When establishing Beta Theta Pi back to a campus, we need to educate ourselves on the ongoing issues in Greek Life and the communities marginalized because of it,” Farner said. “Vanderbilt is a very diverse campus, and we hope to find founding fathers from all backgrounds and experiences to make Beta Lambda reflective of the broader community.”

Despite Farner’s statements about Beta’s commitment to keeping the message of the AGL movement at the forefront of their return, Charles Shissias, Beta founding father and member of the Class of 2023, claimed that he isn’t aware of the AGL movement on Vanderbilt’s campus. He also stated that Vanderbilt will likely remain linked to Greek Life due to being in the SEC, quelling potential concerns about AGL hindering Beta’s return to campus.

“I’m not sure if I would call it [AGL] a movement. As long as we’re in the SEC, I don’t think there’s much of a push to really get rid of it [Greek Life],” Shissias said. “I haven’t seen anybody actually come out of the woodwork and say, ‘hey, I want Greek Life gone, I want to tear down the system.’”

Farner said the chapter aims to promote inclusivity in part by opening their house for use by other organizations.

“We also want to ensure that our members open up the physical space Beta occupies to other students and encourage them to utilize the house for meetings with the other organizations they’re involved with,” Farner said.

The university has reserved the Beta house for other organizations and temporary student housing since Beta disbanded. VSG has pushed for the university to reallocate unused Greek spaces with priority given to marginalized groups, passing the Safe and Fair Housing Act of 2021 on March 17. The former Alpha Omicron Pi house was repurposed as a Multicultural Cultural Space this semester.

The founding fathers of Vanderbilt’s Beta chapter will also participate in the Sons of the Stars New Member Education, which Farner stated will educate them on the morals and expectations of the Beta national fraternity. The program emphasizes to members that fraternities should serve as a positive environment and how Beta “rejects” hazing.

“A professional staff member will lead the founding fathers through the program, and in doing so teach them that an appreciation for the Fraternity is developed through care and intentionality,” Farner’s email reads.

Farner is heading the recruitment process for Vanderbilt’s Beta chapter, which he said will feature more individual meetings and interviews than large events. Students interested in rushing Beta are required to fill out an application, which Farner said he and other Beta national staff will use to assess their alignment with Beta’s ideology.

According to Vanderbilt’s Beta chapter’s Instagram, Shissias is one of Beta’s first five founding fathers.

Farner said Vanderbilt’s Beta chapter has been particularly drawing interest from those who began their time at Vanderbilt during the pandemic, specifically transfer students and members of the Classes of 2024 and 2025. He claimed that this pattern is due to Beta’s commitment to building a healthy community of academic leaders and students who have “genuine care in their hearts.” According to Farner, this environment is partially established by the Beta house’s substance-free policy, which was enforced upon all Beta chapters by the national fraternity in August 2020.

“There are plenty of men at Vanderbilt seeking a fraternity that not only attracts students with broad life experiences but provides a safe and comfortable place that members are proud to call home,” Farner’s email reads.

According to Torrey and Farner, executive board members of the chapter will have the option to move into the Beta house in Spring 2022 if their current living situation allows.

Shissias stated that Beta’s Men of Principle Initiative drew him to join the fraternity, as well as the opportunity to “craft the identity” of the chapter as a founding father. He said Beta similarly has the potential to influence the future of Vanderbilt Greek Life as the campus’s newest chapter.

“You get to make it what you want it to be,” Shissias said.

“My advice to anyone wanting to become a founding father at Beta or any other fraternity/Greek organization in the future is to take advantage of the moment [and] not just to find a community for yourself, but to create one for future students,” Levin said in a message to The Hustler. “My hope is that not just two newly re-established fraternities, but Greek Life as a whole, [will] work together to collectively build a more welcoming and diverse environment for all students on campus and create a model system for other schools nationwide to follow.”

Per Farner, Beta’s recruitment efforts will continue through the Spring 2022 semester in an effort to make the fraternity more accessible to interested students. According to Farner, a “sustainable” Fall 2021 pledge class size would be 20 or more students, who would all be inducted as founding fathers of Vanderbilt’s Beta chapter.

“Going into recruitment only focused on reaching a certain number can compromise the meticulous process of identifying men who are genuinely interested and invested in creating a different kind of fraternity,” Farner’s email reads.

Farner said that Beta’s lack of a national philanthropy allows brothers and chapters to become more in tune to the needs of their individual communities.

“Allowing undergraduate members to decide their philanthropy partners challenges them to learn more about issues going on around them and build more intentional relationships with each organization,” Farner said. “Every city and community may be affected by different issues and inequalities, and we want our members to invest in addressing them fully.”