Mark Roseman spoke as part of Vanderbilt’s Holocaust Lecture Series on Oct. 5 about what Holocaust victim perceptions can reveal about the event’s perpetrators. 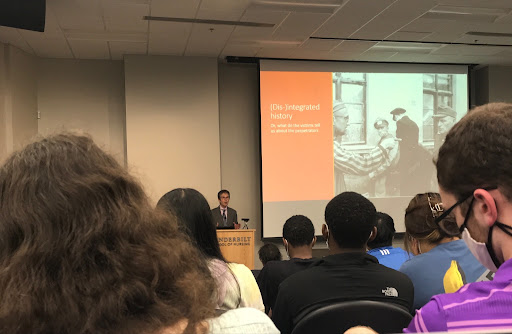 On Oct. 5, the Holocaust Lecture Series (HLS) hosted its first event for the 2021-22 year, during which Mark Roseman gave a lecture titled “‘Ordinary monsters:’ Victims, historians and an ‘integrated history’ of the perpetrators.” In his lecture, Roseman discussed what can be understood about perpetrators of the Holocaust in the writings of the victims.

Throughout his lecture, Roseman referenced diaries and other writings by victims of the Holocaust, including Jean Amery, Victor Klemperer, Willy Cohn, Renata Laqueur and Josef Katz. Roseman said that these writings are rich and not easy to interpret.

According to Roseman, the victims’ writings have information to tell about the perpetrators but tell most about the victims themselves.

“In the end, what we see in victim reflections of the perpetrators is the working through of the disintegration of history and dismantling first of all of a contract of citizenship within Germany and then of a basic human compact,” Roseman said.

Roseman concluded his lecture by saying that an integrated history analyzing the relation between the victims and perpetrators can give insight to both sides. However, he said it does not mean that victim and perpetrator perceptions can be easily “linked together”.

“It is important to look at victim perception of the perpetrators because it is through doing so that we understand what it is that the victims were going through,” Roseman said. “But the victims will not help us resolve the challenge of understanding ordinary men who became monsters.”

Junior Carly Stewart, an active member of Vanderbilt’s Hillel community, attended the lecture because she said she thinks continuing to learn more about the Holocaust is very important. She stated that the lecture provided a new, academic perspective that she had not previously heard about.

“[The lecture] widened my eyes to how even the victims of the Holocaust didn’t exactly know how to describe the perpetrators,” Stewart said.

The HLS, established by former University Chaplain Beverly Asbury, has existed for 43 years. It is the longest continuous lecture series on the Holocaust at an American university.

HLS student board co-chairs Jacob Hale and Nolan Siegel direct HLS student outreach, connecting them to HLS events. Both Hale and Siegel said that the importance of these events is to commemorate the Holocaust and learn from it.

“Maybe studying the Holocaust won’t necessarily help us connect with the people from the past, or maybe it will, yet it seems like it certainly will help us be better able connect with the Jewish community today and other communities who aren’t treated as they should be,” Siegel said.

Hale said he is inspired by the number of students who come to the lectures and the students involved in HLS events who are not from the Jewish community. A total of 82 people attended Roseman’s lecture, 68 of whom attended in person and 14 of whom attended through Zoom.

The year-long theme for the 2021-22 HLS is “The Root of Hate: From Words and Images to Fear and Violence.” It aims to explore the meaning and importance of words and images, especially in relation to the presence of social media.

“[We will be] thinking about the ways that words used to divide us can lead us to othering, and ultimately lead to hate and even violence,” University Chaplain Christopher Donald said. “Also, [we will be considering] the ways that words and images can be used to strengthen community and build relationships.”