The seniors’ strong performances paced Vanderbilt to 20th and 12th overall finishes in the women’s and men’s races, respectively. 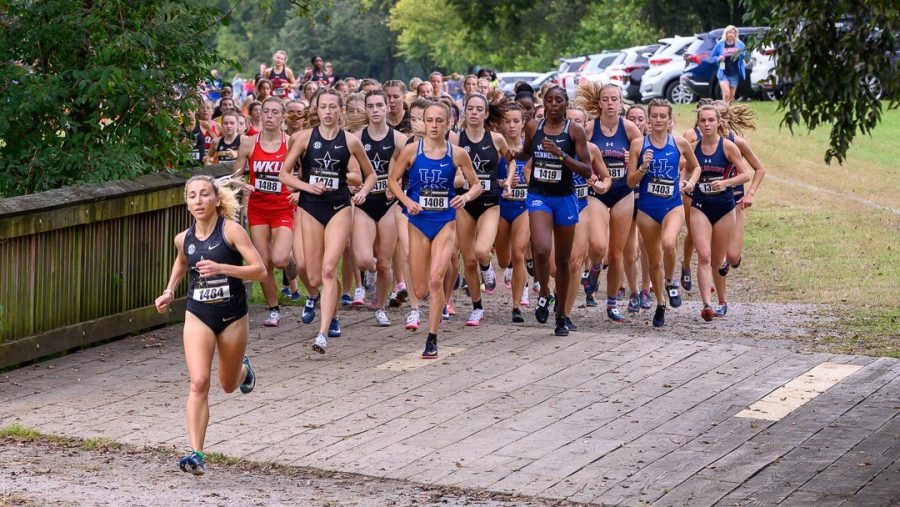 Vanderbilt cross-country competes in a meet in Sept. 2021. (Vanderbilt Athletics).

Vanderbilt’s men’s and women’s cross-country teams competed in their third meet of the season Friday at the Joe Piane Invitational in Notre Dame, Indiana.

In the women’s blue race, the Commodores placed 20th out of 25 teams and ran against fellow SEC competitors Florida, Kentucky, Ole Miss and Alabama. Senior Grace Jensen led the way for Vanderbilt in the 5-kilometer race at Burke Golf Course, finishing in a time of 16:46.3, good for 24th place out of 197 runners.

Next for the Commodores were fifth-year senior McKenzie Yanek, who finished 64th overall in 17:11.8, and freshman Cameron Fawcett, who placed 97th overall with a time of 17:26.7. The final runners to score for Vanderbilt were senior Haley Walker (17:49.5, 135th overall) and sophomore Lainey Phelps (17:54.2, 144th overall). Senior Gillian Mortimer and freshman Ella Lambert finished sixth and seventh for the Commodores with times of 18:26.4 (166th overall) and 19:15.7 (175th overall) respectively.

In the men’s gold race, the Commodores placed 12th out of 21 teams and ran against fellow SEC competitor Auburn. Senior Matthew Estopinal led the way for Vanderbilt in the 8-kilometer race, finishing in a time of 24:37.4, good for sixth place out of 152 runners.

Next for the Commodores were senior Nick Laning, who finished 21st overall in 25:10.6, and freshman Phillip Metcalf, who placed 100th overall in 26:48.1. The final runners to score for Vanderbilt were senior Jonah Bird (26:59.1, 105th overall) and freshman Zach Hodges (27:00.2, 106th overall). Freshman Andy Niser finished sixth for the Commodores with a time of 28:53.1 (137th overall) and fifth-year senior Caleb Van Geffen competed for Vanderbilt but did not finish the race.

“Both teams have accepted the challenge of buying in,” director of cross country Althea Thomas told The Hustler. “We have some great men and women who want to do well, take every challenge each day and hold each other accountable.”

Both cross-country teams have benefited from strong upperclassmen leadership this year, particularly from Jensen and Estopinal.

“They [Jensen and Estopinal] are always working hard in the trenches, which is helpful from a coaching perspective,” Thomas said. “And their teammates love celebrating them and supporting each other. Whether it’s hanging out at the movies or eating in the dorms, our teams are cohesive groups that enjoy spending time with each other.”

“We look at training and competition as part of our planned progression,” Thomas said. “We have had a couple races under our belt, three to this date, and honestly, going forward, we are trying to close the gap between us and our competition and get the times that we know we’re capable of running.”