Until Vanderbilt starts taking sexual assault seriously, every email alert announcing a sexual assault functions only to foster an environment of fear for students. 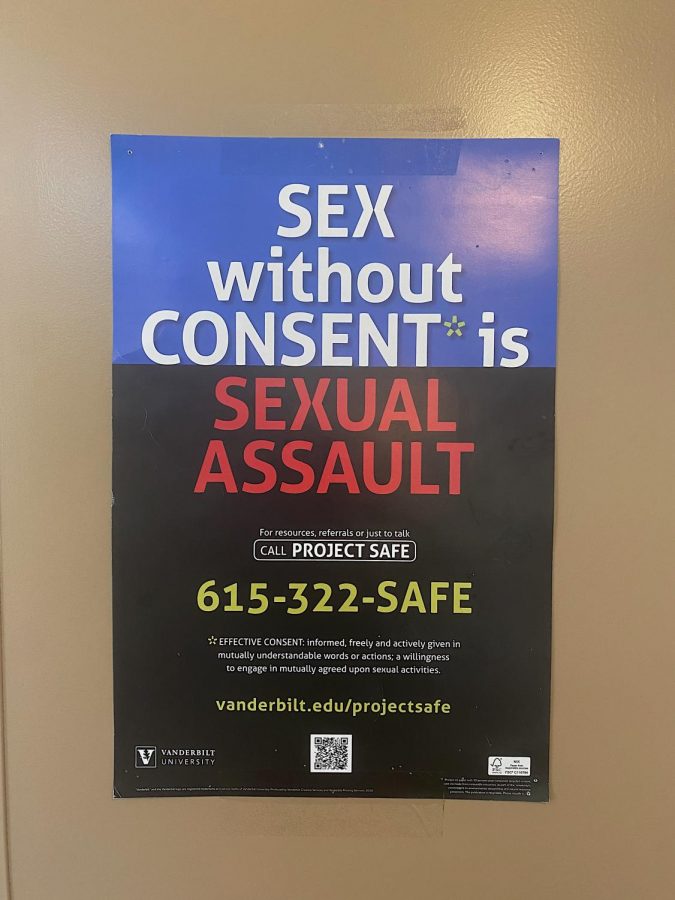 A poster highlighting consent that was put up on the first floor of the Scales dorm in Branscomb. This flyer was put up shortly after the third email report of sexual assault. (Hustler Staff/Claire Rich)

In the first six weeks of Vanderbilt’s fall semester, VUPD has received five separate reports of sexual assault, all taking place in campus residence halls, all perpetrated by male students. These are only the assaults where the survivor chose to move forward with the Title IX process, mandating that an email be sent to the student body. Two of these assaults were committed by men onto other men—although you may not have noticed that they were two separate assaults because VU Public Safety (VUPS) consolidated both incidents into just one email.

Vanderbilt is legally required to send us these emails under the Clery Act that mandates transparency around campus crime statistics and policies. All four emails—sent on Aug. 28, Sept. 9, Sept. 11 and Sept. 21 of 2021—repeat the same five reminders: “sexual assault does not just occur between strangers,” “consent must be clear and unambiguous for each participant at every stage of a sexual encounter,” “the absence of ‘no’ should not be understood to mean there is consent,” “a person who is asleep or mentally or physically incapacitated, either through the effect of drugs or alcohol or for any other reason, is not capable of giving valid consent” and “sexual assault is a crime.” If you’re a Vanderbilt student reading this article, it’s likely you could have listed those five facts from memory by now.  It’s significant to mention here that the first few weeks of college usually see the highest reports of sexual assault—that being said, it is no less terrifying to receive emails about assaults against your peers.

Cara Tuttle Bell, the director of Project Safe—Vanderbilt’s center for sexual misconduct prevention and response—spoke on the function of the emails. The Title IX Office did not respond to a request for comment.

“[The emails] function to increase awareness about the prevalence of sexual assault and prompt community members to check in on their friends, engage in bystander intervention, use the VandySafe app virtual escort feature, make extra effort to clarify consent in sexual situations or avoid engaging in sexual activity if a person may be too intoxicated,” Bell said in an email to The Hustler. “A series of security alerts tends to prompt students to seek out additional prevention education and support.”

Checking in on friends, intervening as a bystander, using the VandySafe app, clarifying consent and avoiding sexual activity when too intoxicated are all efforts our community should certainly be taking on, regardless of how many people have been assaulted. While I’m glad these emails have been shown to prompt community awareness, the issue lies in the fact that it should not take five (or more?) assaults for our community to be aware—if we even are ‘aware’ now. If the emails were truly working to promote the actions listed above, shouldn’t the initial email alert have led to fewer assaults? Instead, our community has received four more reported assaults in our inbox, and four more people have presumably had their lives turned upside down.

Beyond the actual effectiveness of the emails, a lot of the issue lies in what the emails fail to acknowledge. What the emails don’t say is whether or not these alleged perpetrators are walking freely among us on campus right now—whether or not they are still using the campus as a hunting ground. What the emails don’t say is that only 20 percent of college-aged women report sexual assaults (this data is incomplete: it excludes rape and non-women). If this statistic holds true at Vanderbilt, these five reported assaults make up only 20 percent of assaults that are occurring on campus. As a female Vanderbilt student, and given that nine out of ten rape victims are women, I certainly don’t feel safe at Vanderbilt. I find myself walking through campus, passing students and wondering if they could be the alleged perpetrators that are filling up my inbox, wondering if I could be next. And the worst part is, I know I’m not alone. This campus is filled with women and men who walk through campus with this fear in the back of their heads—will they be the next victim?
I am tired of receiving these emails. I’m tired of reading the same five sentences over and over again. I’m tired of having to wonder if the victim is being cared for in this impossibly hard time for them. I’m tired of having to wonder if the perpetrator is standing next to me at a tailgate.
Last year, being a COVID year, saw significantly fewer reports compared to a non-COVID year. In the 2019-2020 year (July 1-June 30), the school received 412 sexual misconduct incident reports. Of these 412 reports, 20 investigations were opened and only 10 were closed. Is this what we’re to expect for this year—407 more reports? Five reports is already far too many.

Cara Tuttle Bell commented on the potential resurgence of assault this year as well.

“Victim advocates here and at other colleges and universities worried and anticipated that we would see a rise in the number of alcohol-facilitated acquaintance-based assaults, compared to the prior year, as young adults are returning to some of their pre-pandemic social behaviors,” Bell said. Perhaps, then, Vanderbilt should be researching why “pre-pandemic social behaviors” on our campus include and thereby normalize sexual assault.

These survivors are our friends. They’re people we love. They’re people whose lives were devastated within the course of one encounter. In a majority of assault cases, it can take survivors significant time to even acknowledge what happened to them, and much more time to come to terms with it. It is important to listen to our friends and take seriously any fears they have.

Listen closely if friends come to you for support and help. Pay attention to friends expressing that “something weird happened to me last night,” or “I don’t feel that good about what happened” or “I was really drunk when they took me home.”

It is also essential to hold our friends accountable, to understand that we may be close with perpetrators of sexual assault, too.
You may believe those you are close to are too nice to hurt others or that they “would never do something like that.” You may believe that the accuser is exaggerating, making a mistake or falsely placing blame. Perpetrators of sexual assault may be “nice” guys. They may be your frat brothers. They are not strangers seeking out and attacking victims in the dead of night; they are people we all know.
Put yourself in the shoes of those who have been hurt. What if the victim was your sister or brother? Your girlfriend or boyfriend? Would you still be so quick to say how “nice” of a guy your friend is? Blame perpetrators, not victims. Not to mention, you shouldn’t have to be related to or in love with someone to empathize with them, but in such desperate times, I can’t help but feel like I’m shouting into a black hole when petitioning for more empathy for victims.

Vanderbilt University, you are failing. You are failing to keep us safe. We don’t need to know the names of assailants, but we do need to know your plan of action for keeping us safe when far too many sexual assaults have taken place in such a short time. I, personally, would have liked an email a while ago from Chancellor Diermeier or another administrator with knowledge on the issue acknowledging this problem and outlining new prevention tactics. The student body has no information on these assaults, but the school does—they should be using this information to bring forward more effective prevention techniques.

I’m not making the claim that Vanderbilt doesn’t have any prevention or support practices in place. I’m more than aware of Project Safe, first-year sexual assault prevention training and greek life training. Project Safe is an incredible organization that provides education and support to all those affected by sexual misconduct of any sort on campus. It’s an organization I wholeheartedly support for all survivors on campus to reach out to—I echo Bell’s encouragement of students to “reach out to talk with Project Safe’s Prevention Educators with any questions and attend our upcoming programs.” All of this programming is so necessary, but considering the recent reports, it’s just not enough. I can’t help wondering how many victims have solely benefited from Project Safe after an assault. Support after an assault is so important, but what about preventing the actual assault?

If five assaults in six weeks is considered excellent prevention, I have no idea what to say. Vanderbilt administration needs to reevaluate their prevention tactics in place and bring forward new attempts to limit sexual assault. As of June 2021, Vanderbilt’s endowment totals over $10 billion—I don’t have the answer to what will work to prevent assault on campus, but Vanderbilt certainly has the financial resources to search for it. I’m not saying throwing money at the problem can solve a deep-seated cultural issue, but it can open opportunities for more research, resources and educational opportunities. The safety of our student body is at risk; Vanderbilt should be devoting far more attention and resources to this issue.

I am also not making the claim that Vanderbilt University is to blame for sexual assault. The sole blame to place in sexual assault cases is on the perpetrators. However, it’s clear by the number of assaults that perpetrators are not afraid to commit assault on campus. At a higher education institution like Vanderbilt (and one of the best in the country), I say that at that point, it’s the institution’s responsibility to maintain a culture on campus where sexual assailants fear the very real repercussions of committing such a harmful act. I can ask for more from Vanderbilt, and so can you.

When asked for a statement, a university representative emphasized that they are “always concerned when there is a report of sexual assault on our campus” and that “no university is immune to the problem of campus sexual assault.”

They emphasized the policies in place—education modules on sexual violence, sexual assault prevention education during orientation, and the existence of a “number of resources” for students. The University stated that they are “committed to confronting and combating this societal problem, and to providing our community with the resources and support they need and deserve.”

Yet, the University’s statement repeatedly referred to how sexual assault is not just an issue at Vanderbilt, but rather at college campuses around the country, as if the administration just assumes that sexual assault is an unavoidable part of our college experiences. I already knew that sexual assault is an issue everywhere but that doesn’t make me feel any safer here.
Sexual assault on campus is only inevitable if you believe it is. Do better.
It should be the perpetrators who are scared to walk through campus, not the victims. Until this university publicly shows us that they have started taking sexual assault seriously, every email alert that a sexual assault has occurred functions only to foster an environment of fear for students. Vanderbilt, I ask you this—will we be receiving another four emails in the coming weeks? How are you supporting these victims, beyond sending them the numbers of counseling centers? And what of the assaults on campus that go unreported?