Hungry? Hank residents have you covered with reviews of Nashville dining

From their view in Hank Ingram House, two first-year students are taking the food scene in Nashville by storm. 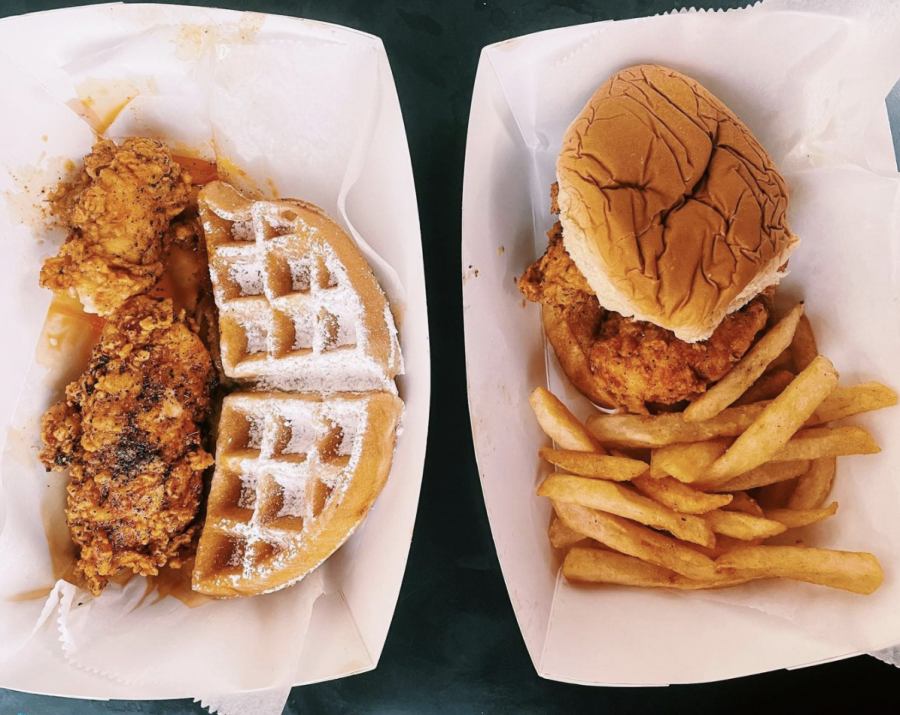 Between Taste of Nashville, Saturday night birthday dinners and late-night study cravings, Vanderbilt and the city of Nashville have plenty of food to offer. After enterprising first-years Ella Ducharme and Sofia Lloyd experienced a “rocky start regarding this school year’s meals” and discovered amazing alternative food choices when granted $50 daily credits as a result of the the dining staff shortage, they decided to start an Instagram account, @hungryyhank, to rank local food.

The account is slowly building a following—it currently boasts 160 followers—and has covered a wide span of restaurants ranging from Edley’s Bar-B-Que, Oku and none other than the infamous Taco Mama. In addition to businesses in the Nashville area, the account also rates Vanderbilt Campus Dining and the food trucks on Commons. Through their specific rating system, Ducharme and Lloyd allow their followers to get a full range and experience of the food without even tasting it.

The account’s logo reads, “Hank is Hungry!!” in reference to their Commons House, Hank Ingram. With this new brand, Ducharme and Lloyd created their acronym rating system: “SPACT.”

“S stands for service, P for presentation, A for accuracy, C for cost, and T, of course, for taste,” Lloyd said. “Each of these categories is given a rating out of ten, followed by a candid, detailed and often humorous review of the food.”

When Ducharme and Lloyd sat down to write their first caption, they wanted to make it long and descriptive, since those are the types of food reviews they like to read.

“Rock n Roll sushi is quaking rn,” Ducharme said in her review of Oku. “Unfortunately got stuck with the trainee waiter tonight … he was fine but like tried to make really cheugy jokes and just wasn’t the vibe. Lots of courtesy laughs.”

They noted that their  favorite restaurant so far has been Geist Bar + Restaurant.

“The bread was the best thing we have ever tasted,” Ducharme said.

When it comes to the campus food trucks, the foodies loved the Nashville Chicken & Waffles truck.

When they arrived at Vanderbilt, Ducharme and Lloyd noticed that the dining situation did not meet their expectations for top-rated dining. After all, the Princeton Review ranked Vanderbilt Dining #6 on its Best Campus Food list in 2021 … somehow.

“We created the account kind of out of boredom, and we were mad at Vanderbilt Dining. As first-years, we are confused why Vanderbilt forces us to have a dining plan then doesn’t provide sufficient food,” Ducharme said. “We have tons of meal swipes left at the end of the week, and there is a large gap in the day when Munchie or a dining hall close to us is not open.”

The food account began with just Ducharme and Lloyd’s friends following, and it has since grown to be a space where they can connect with other students and commiserate about the woes of campus dining.

“One guy sells waffles in Hank, and he has been DMing us to come taste and rate them. Another guy slides up on each of our stories,” Ducharme said.

The students love interacting with people through the account, which started as anonymous—although they’re planning to reveal their identities on the account soon—and can interact with their followers in fun and humorous ways, such as chatting with the boy who slides up on every story they post.

Check out @hungryyhank for reviews of popular Nashville eats without ever having to leave your dorm room!