After a tough loss to Stanford, the Commodores begin SEC play this week against the No. 2 Georgia Bulldogs. 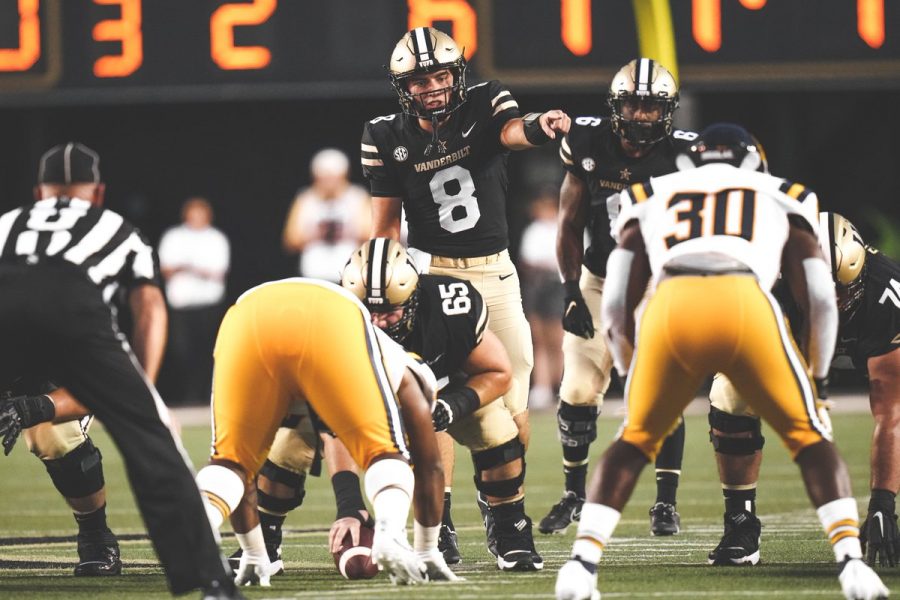 After a competitive, 41-23 loss to Stanford, Vanderbilt will play host to the No. 2 Georgia Bulldogs this Saturday in a matchup that few expect to be remotely close. Nonetheless, there are a few key matchups to watch this week that will certainly be worth keeping an eye on even if they do not decide the outcome of the game.

The Commodores will be looking for their first victory over Georgia since 2016 while Georgia will look to keep its undefeated season alive.
Georgia QB JT Daniels vs. Vanderbilt Defensive Coordinator Jesse Minter
Georgia QB JT Daniels firmly won the starting job last season and generated plenty of excitement for Georgia fans, as he was voted second-team All-SEC in the preseason. However, he did not get off to the best start this season, going 22-for-30 for just 135 yards and an interception in the opener, albeit against an extremely talented Clemson defense. Daniels, however, came back against South Carolina and looked sharp, throwing for 303 yards and three touchdowns.

On the opposing sideline, Vanderbilt defensive coordinator Jesse Minter will look to shore up a defense that has been inconsistent so far this season. They have played very well at times, holding Colorado State scoreless on nine consecutive possessions, but they have also had some poor stretches, including giving up scores on six of the first seven drives to Stanford. Minter will need to have his guys ready to play and he will need to keep Daniels on his toes with a mix of defensive looks. A stout defensive performance could go a long way in helping Vanderbilt keep this game competitive.
Georgia Nose Tackle Jordan Davis vs. Vanderbilt Interior Offensive Line
Vanderbilt rushed for 247 yards last week against Stanford, averaging 5.6 yards per carry. One of the key developments was improved push from the interior of the offensive line. Guards Cole Clemens and Ben Cox and center Julian Hernandez played well, and they will have to generate an even better push against a stout defensive line anchored by nose tackle Jordan Davis, a senior who was voted preseason First-Team All-SEC by the media.

Georgia has been a nearly impossible team to run against, thanks in large part to Davis. Against Clemson, the Bulldogs surrendered just two rushing yards on 23 carries. Two weeks later, they gave up just 82 rushing yards to South Carolina on 34 carries. Vanderbilt will not get near the 5.6 yards per carry mark they put up last week, but if it can establish the run, churn out 100 rushing yards and not be completely one-dimensional, the Commodores could make this game more competitive than expected.
Vanderbilt P Harrison Smith vs. Georgia RS Kearis Jackson
Georgia has one of the best—if not, the best—defenses in the country. South Carolina head coach Shane Beamer put it best in an interview after his team’s 40-13 loss to Georgia last week.

“They’ve got like 100 five-star football players on their defense,” he said after the loss.

Vanderbilt will likely be forced to punt quite a bit in this game, as most do against Georgia. Punter Harrison Smith has been solid this season, averaging over 45 yards per punt in each of his last two games, with a long of 66 against Colorado State

Kearis Jackson, the Georgia punt returner, was voted Third-Team All-SEC as a return specialist by the media this preseason. After watching him return two punts for 33 and 15 yards against UAB, South Carolina made an effort to avoid any runbacks, as they averaged just 40.8 yards per punt, but held him to no gain on the only punt he was able to return. Smith will have to angle his punts towards the sideline and help out the gunners by giving them plenty of hang time. Any line drives could lead to explosive returns from Jackson, and could let the game get out of hand quickly.

The Commodores and Bulldogs will kick off from Vanderbilt Stadium at 11 a.m. CDT this Saturday.