Near upsets and easy victories highlighted Week 3 action as the SEC turns the page to Week 4. 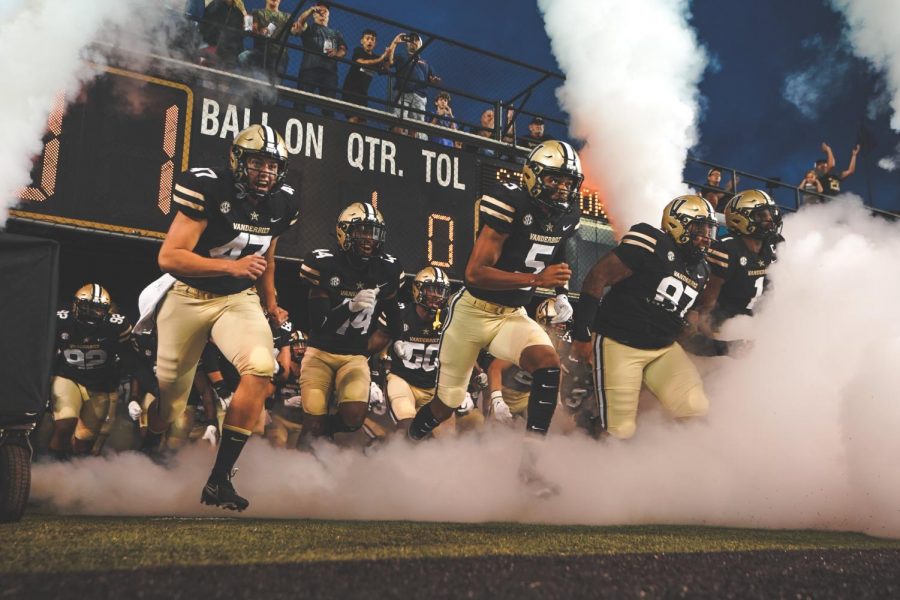 Vanderbilt lost its second game of the season on Saturday. (Vanderbilt Athletics).

Week 3 of the college football season saw many exciting matchups and results. Alabama, the reigning national champions, looked vulnerable, almost falling to Florida in the Swamp. Auburn could not escape Happy Valley with a win, as Penn State was too much to overcome. Mississippi State lost to Memphis in a game that involved a very controversial sequence. And for Georgia, Texas A&M, Ole Miss and Arkansas, it was business as usual.

Got all that? Here’s how the SEC shapes up heading into Week 4:

For the third week in a row, the Tide stayed atop our power rankings after a nail-biting 31-29 victory at Florida. After starting off with a commanding 21-3 lead through the first quarter (including back-to-back touchdowns on the first two drives), ‘Bama did not score again until the 4:33 mark in the third quarter. Their most important play of the game, however, came from the defensive side, when they stuffed Florida running back Malik Davis’s two-point conversion run at the line, preventing the Gators from tying the game at 31 with 3:10 left in the fourth. Quarterback Bryce Young continued to legitimize his stardom by throwing for 240 yards and three touchdowns in his first away game of the season. Alabama returns home next week to face Frank Gore Jr. and the Southern Mississippi Golden Eagles as 45-point favorites.

If Georgia is to overcome Alabama and win the national championship that has so long eluded them, it might have to do so this year. Head coach Kirby Smart’s first No. 1 recruiting class are now seniors, his No. 2 class are juniors and his second No. 1 class are sophomores. The Bulldogs certainly looked the part on Saturday, dismantling the South Carolina Gamecocks by a final score of 40-13. Quarterback JT Daniels threw for 303 yards and three touchdowns and running backs Zamir White and James Cook both added 50-plus yards on the ground to go along with rushing scores. But before Bulldog fans can get too far ahead of themselves, Georgia must first travel to Nashville to face the Vanderbilt Commodores on Saturday at 11 a.m. CDT.

Texas A&M jumps back up two spots this week after a dominant 34-0 victory over New Mexico. After a horrid offensive performance in Colorado last week, the Aggies redeemed themselves with an offensive explosion. Quarterback Zack Calzada threw for 275 yards and three touchdowns in his first start of the season, including a 70-yard touchdown pass to Demond Demas. Running back Isaiah Spiller also performed well, rushing for 117 yards and a touchdown on 15 carries. The Aggies hope to carry this momentum into next week, where they’ll face Arkansas in Fayetteville.

While the Gators were not able to successfully shock the college football world with an upset of top-ranked Alabama at home, they showed they are not scared of the big dogs in the SEC. In what looked initially to be another easy Alabama victory, Florida clawed back in the second half, outscoring the Tide 20-10. With under five minutes to play in the fourth quarter, Florida scored a touchdown, bringing the score to 31-29, but was unable to convert on a two-point attempt to tie the game. Despite piling on more total yards than Alabama, 439-331 respectively, the Gators could not ultimately overcome the combination of a slow start offensively and Crimson Tide quarterback Bryce Young’s 240-yard, three-touchdown performance. Florida will look to better defend the Swamp when they welcome the Tennessee Volunteers on Saturday at 6 p.m. CDT.

Nothing could stop quarterback Matt Corral this week against Tulane, not even a rain delay! After a two-hour stoppage in action, Ole Miss secured a 61-21 victory against the Green Wave. Corral, the six-foot junior out of Ventura, California, set a school record with seven touchdowns on Saturday (three passing and four rushing) to go along with 355 yards in the air and 68 on the ground in only three quarters of play. The Rebels will be able to celebrate their win an extra week due to a bye in their schedule, but they return on Oct. 2 to face their toughest opponent yet: No. 1 Alabama on the road.

Coming off a momentous victory against the Texas Longhorns in Week 2, the No. 16 Arkansas Razorbacks handled business versus the Georgia Southern Eagles, winning 45-10. Second-year head coach Sam Pittman has reinvigorated the Razorback fan base, earning Arkansas its first national ranking since 2016. Quarterback KJ Jefferson got anything he wanted on Saturday, completing 13 of 23 passes for 366 yards and three touchdowns. The Razorbacks also added three scores on the ground en route to 269 yards rushing as a team. Through three games, Arkansas has averaged 41 points per game as well as nearly 500 total yards per game.  The Razorbacks will face a true test this coming week when they play host to the No. 7 Texas A&M Aggies at 2:30 p.m. CDT.

In one of the most electric events of the college football season, the Penn State Whiteout, Auburn came up short 28-20 against the Nittany Lions. Following two weeks of dominance against significantly inferior teams, Auburn put up a fight in their first matchup against a top-25 opponent. Running back Tank Bigsby scored the only two touchdowns of the night for the Tigers on top of his 102 yards of rushing, and quarterback Bo Nix added 185 passing yards, completing 21 passes in 37 attempts. The game’s most notable moment came with 3:08 left in the fourth quarter with the Tigers down eight. Auburn head coach Bryan Harsin and offensive coordinator Mike Bobo elected to throw a fade to receiver Kobe Hudson on fourth-and-goal from the two-yard line, which came nowhere near completion. The questionable decision proved to be the deciding factor that sealed a successful whiteout for the Penn State Nittany Lions. Auburn plans to bounce back from this devastating loss with a home game against Georgia State Saturday, a game in which they are favored by almost four touchdowns.

The LSU Tigers soundly defeated the Central Michigan Chippewas 49-21 on Saturday. The season has not gone the way most in Death Valley would have hoped, with the Tigers having dropped the first game of the year to UCLA. Despite this, the Tigers win on Saturday was their second straight and there is reason to be more optimistic. LSU’s offense posted 484 total yards, highlighted by quarterback Max Johnson’s 372 yards and five touchdowns to one interception. True freshman wide receiver Deion Smith added 135 yards and two touchdowns receiving. The defense added five sacks to the effort as well. LSU begins its SEC slate on Saturday when it travels to Starkville to face Mississippi State at 11 a.m CDT.

Dropping one spot to No. 9, Kentucky barely edged out the FCS Chattanooga Mocs Saturday, 28-23, keeping their undefeated season alive. Though Kentucky had the lead the majority of the game, Chattanooga stayed within one possession, even gaining a 16-14 lead in the early part of the fourth quarter following a 30-yard field goal from kicker Aaron Sears. The Chattanooga lead didn’t last long, however, as the Wildcats scored a 31-yard touchdown on the next drive and then broke the game open with a 95-yard pick-six from senior Tyrell Ajian. Chattanooga scored one more touchdown with 1:20 left in the fourth but by that time, the game had already been over. Wildcats quarterback Will Levis tallied 254 yards and two touchdowns while also throwing two interceptions, and receiver Wan’Dale Robinson had himself a day with 111 yards on eight receptions. Kentucky prepares to travel to South Carolina next week to face the conference rival Gamecocks.

Following a close loss to the Kentucky Wildcats last weekend in Lexington, the Missouri Tigers rebounded in a 59-28 thrashing of FCS-opponent Southeast Missouri State. Quarterback Connor Bazelak completed an efficient 21 of 30 passes for 346 yards and three touchdowns. To make matters worse for the Redhawks, each of Missouri’s backup quarterbacks also added touchdown passes when the game was firmly in hand. To go along with 440 yards in the air, the Tigers added 235 yards on the ground. Missouri faces Boston College this Saturday at 11 a.m. CDT before its second SEC tilt against Tennessee Oct. 2.

In one of the most controversial games of the week, Mississippi State fell short against Memphis 31-29, giving the Bulldogs their first loss of the season. What made the game so controversial? With 5:36 left in the fourth quarter, the Bulldogs’ Joe Doyle punted the ball to around the two-yard line where it was touched by multiple Mississippi State players who then stopped playing, believing the ball was downed. However, the official ruling says that the ball is not down until the kicking team gains full possession of the ball. Aware of this ruling, Memphis punt returner Calvin Austin scooped up the ball and ran it 94 yards to the house, extending the Tiger lead to 28-17. The play gets even more confusing once you notice the referee throw his marker and begin to signal the play dead, dropping his arms once Austin retrieved the ball. The teams then traded scoring drives (two touchdowns from Mississippi State and a field goal from Memphis), but the Bulldogs’ inability to convert a two-point conversion after either of their touchdowns sealed the win for Memphis. Even with the loss, Mississippi State quarterback Will Rogers put up an incredible 419 yards with three touchdowns, completing 75 percent of his throws in the process. The Bulldogs prepare to face LSU at home next week.

The Tennesee Volunteers rebounded after a close loss to Pittsburgh last weekend by thoroughly defeating Tennessee Tech 56-0. The Volunteer defense wreaked havoc all day long, totaling four interceptions and four sacks while keeping Tennessee Tech’s offense under 200 total yards. Quarterback play has been a question for the Volunteers this season, but on Saturday there were no questions as Hendon Hooker threw for 200 yards and three touchdowns in Joe Milton’s absence. The Volunteers begin their SEC slate this Saturday when they head to Gainesville to face Florida at 6 p.m. CDT.

After just squeaking by against ECU last week, South Carolina followed up this week with a blowout—too bad they were on the other side of it. The Gamecocks traveled to Georgia and got obliterated 40-13 in a game that never felt competitive. In sophomore Luke Doty’s first game at quarterback this season, the Gamecocks gave up three sacks and a safety to the hounding Georgia defense, as well as an interception and a fumble on back-to-back drives. Doty only threw for 153 yards at a 13 of 26 clip but was able to connect with senior receiver Josh Vann three times for 128 yards, including a 61-yard reception and a 36-yard touchdown. South Carolina will travel back home to face Kentucky this Saturday.

The season for Vanderbilt so far has been up and down. Week 1 started out with a disappointing loss to FCS-opponent East Tennessee State but Week 2 provided the first win of the Clark Lea era. Last Saturday, however, Vanderbilt could not continue rolling, dropping their contest against the Stanford Cardinal, 41-23. In the first half, both teams traded blows, drawing the score even at 14-14. Unfortunately for Vanderbilt, the end of the second half saw Stanford score 13 unanswered points in a matter of minutes which permanently turned the tide of the game in Stanford’s favor. Despite the loss, Vanderbilt rushed for 247 yards, highlighted by running back Rocko Griffin’s 107 yards on 19 carries as well as running back Re’Mahn Davis’s 76 yards and a touchdown on 12 carries. Wide receivers Chris Pierce and Will Sheppard both hauled in six passes as well. Vanderbilt will look to get back on track in a tough matchup with Georgia at 11 a.m. CDT on Saturday in Nashville.