Dores in the Pros: Weeks 1 and 2 Recap

The NFL is officially underway. How did former Commodores fare in their 2021 debuts? 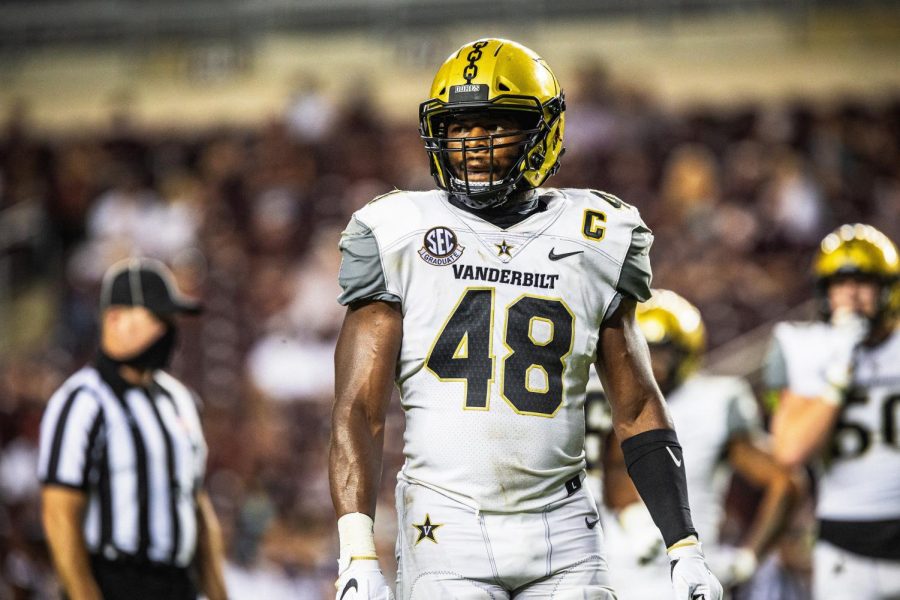 Former Commodore Andre Mintze suited up for the Denver Broncos in Weeks 1 and 2. (Hustler Multimedia/Hunter Long).

Week 1 of the NFL was nothing short of entertaining. The action started with a thrilling Thursday Night Football game that saw the Tampa Bay Buccaneers beat the Dallas Cowboys on a game winning field goal. Four days later, the Las Vegas Raiders shocked the Baltimore Ravens in overtime on Monday Night Football.

The action did not dissipate with Week 2’s games. It started with another thrilling Thursday night contest between the Washington Football Team and the New York Giants that saw Taylor Heinicke win his first game as an NFL quarterback. The Ravens entertained again, this time defeating the Kansas City Chiefs in a Sunday Night Football offensive spectacle.

A total of 17 Commodores started the season on NFL rosters. Of those 17, 12 of them are on active rosters, and of those, nine competed in Weeks 1 and 2.
Andre Mintze (DE) – Denver Broncos
Mintze played all four of his college years for the Commodores before signing as an undrafted free agent with the Denver Broncos back in May 2021. He finished his career at Vanderbilt with 75 tackles and 8.5 sacks before working his way onto the active roster throughout training camp. In the Broncos’ Week 1 victory against the New York Giants, Mintze notched 27 snaps and added one tackle. He played 14 snaps in their Week 2 victory against the Jaguars.
Casey Hayward (CB) – Las Vegas Raiders
Hayward spent four years at Vanderbilt, but it was his senior season that stood out. He ended the year with seven interceptions and 62 tackles en route to becoming an All-American. He was drafted by the Green Bay Packers in the second round of the 2012 NFL Draft. He spent four years in Green Bay and five years with the Los Angeles Chargers before singing with the Las Vegas Raiders in the offseason. He played 67 snaps and made two tackles in the Raiders’ win against the Baltimore Ravens. In the Raiders’ Week 2 win against the Steelers, Hayward defended two passes and notched a tackle.
Oren Burks (LB) – Green Bay Packers
Burks actually spent five years at Vanderbilt after redshirting his freshman season. Like Hayward, his finest statistical season came as a senior, when he produced 45 tackles, a sack, an interception and a fumble. The Packers selected him in the third round of the 2018 NFL Draft. Burks played 28 snaps and made one tackle in the Packers’ Week 1 loss to the New Orleans Saints. Burks made two tackles in the Packers’ win against the Detroit Lions in Week 2.
Zach Cunningham (LB) – Houston Texans
Cunningham is arguably the most decorated Vanderbilt defensive player ever. He was a first-team All American and an All-SEC first team selection. He finished with 71 solo tackles, two forced fumbles and four fumble recoveries. He was selected in the second round of the 2017 NFL Draft by the Texans. In Week 1, Cunningham logged six tackles and a defended pass en route to a blowout win against the Jacksonville Jaguars. In the Texans’ Week 2 loss to the Browns, he made one tackle on 47 snaps played.
Adam Butler (DT) – Miami Dolphins
Like many professional Commodores, Butler’s best college season came as a senior, where he logged 18 solo tackles and four sacks. In 2017, he signed with the New England Patriots as an undrafted free agent, where he spent five years. This offseason, he signed with the Miami Dolphins. In his debut, Butler recorded two tackles and played 53 snaps, helping the Dolphins defeat the Patriots. He then played 55 snaps and assisted on one tackle in the Dolphins’ Week 2 loss to the Bills.
Stephen Weatherly (DT) – Minnesota Vikings
Weatherly ended his three-year career with the Commodores with 10.5 career sacks and 25 tackles for loss. He was taken in the seventh round of the 2016 NFL Draft by the Vikings. He spent the first four years of his career in Minnesota. He then spent one year with the Carolina Panthers before returning to the Vikings this offseason. He played 38 snaps and recorded three tackles in the Vikings’ Week 1 loss to the Cincinnati Bengals. Weatherly played 53 snaps in the Vikings’ Week 2 loss to the Cardinals. He notched four tackles, one of which was a tackle for loss.
Trent Sherfield (WR) – San Francisco 49ers
In his fourth and final season at Vanderbilt, Sherfield caught 50 passes for 729 yards and five touchdowns. He ranks eighth all-time in receiving yards and receptions for the Vanderbilt football program. Sherfield started his career as an undrafted free agent with the Arizona Cardinals but he signed with the San Francisco 49ers this offseason, and his debut did not disappoint. He caught two passes for 23 yards and a touchdown in their victory over the Detroit Lions. Sherfield caught one pass for nine yards in the 49ers’ Week 2 victory over the Philadelphia Eagles.
Khari Blasingame (FB) – Tennessee Titans
Blasingame finished his senior season at Vanderbilt with 401 rushing yards. He added 320 receiving yards on 25 receptions. The former Commodore tailback started his career on the Minnesota Vikings practice squad as an undrafted free agent. Soon after, he was signed by the Titans, and has been a key special teamer for them ever since. In the Titans’ Week 1 loss to the Arizona Cardinals, Blasingame recorded one tackle on 23 snaps. He played 16 snaps in the Titans’ win against the Seattle Seahawks in Week 2.
Joejaun Williams (CB) – New England Patriots
Williams’ junior season at Vanderbilt was his most productive. After posting four interceptions and receiving all-SEC honors, he declared for the NFL Draft. He was taken in the second round of the 2019 NFL Draft by the Patriots. In Week 1, Williams registered one tackle on 23 snaps in the Patriots’ loss to the Dolphins. In Week 2, Williams played 33 snaps and made four stops in the Patriots’ win against the New York Jets.

In addition to these nine players, there were three former Commodores on active rosters who didn’t play in Weeks 1 or 2: Lions offensive tackle Will Holden, Jacksonville Jaguars cornerback Tre Herndon and Tampa Bay Buccaneers running back Ke’Shawn Vaughn.