McKenzie Yanek and Matthew Estopinal led the way for the Commodores at Percy Warner Park. 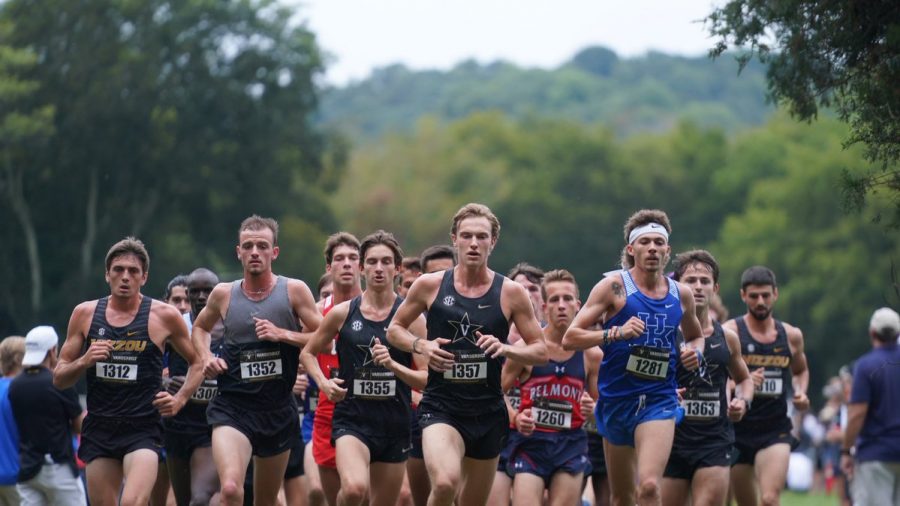 The Vanderbilt cross-country team had a strong showing in their home meet this past week at Percy Warner Park. (Vanderbilt Athletics).

The Vanderbilt women finished second, while the men placed fifth. Graduate McKenzie Yanek and senior Matthew Estopinal headlined the meet for the Commodores, placing second overall in their respective races.

Kentucky had a strong showing, with their women’s team winning the meet and their men’s team finishing second after losing 3-2 on tiebreak to MTSU. Missouri and Belmont placed third and fourth, respectively, in the men’s race, while Missouri, MTSU and Belmont rounded out the top five behind Kentucky and Vanderbilt in the women’s race.

Yanek had a breakout performance Friday, establishing that she and dependable senior Grace Jensen will be a formidable duo this season. Yanek got off to a lightning-fast start in the 5-kilometer race, opening up a sizable lead over Jensen and Kentucky freshman Tori Herman by the end of the first mile. Jensen and Herman made up ground in the next two miles, and ultimately Herman was too much to handle for Vanderbilt’s top runners. She won the race with a time of 17:02.3, while Yanek and Jensen placed second and third, respectively, with times of 17:07.4 and 17:10.4.

“I started off faster than what I had planned to,” Yanek said. “And I definitely felt it in the middle of the race, so it was hard to respond when [Herman] made a strong surge in the middle. But I’m happy with the last 400 meters—I closed the gap quite a bit.”

Behind Yanek and Jensen, a nice display of teamwork helped the Commodores secure their second-place finish. Freshman Cameron Fawcett followed up her impressive first meet with an 11th-place finish, running a time of 17:41.5. Fawcett ran alongside and worked together with senior Haley Walker throughout the race, as the two propelled each other to speedy times. Walker had an excellent performance herself, placing ninth with a time of 17:34.5. Both Walker and Fawcett had strong finishes, with each passing one runner ahead of them in the closing stretch.

Freshman Ella Lambert, sophomore Lainey Phelps and fifth-year senior Gillian Mortimer similarly operated as a pack, sticking together for the length of the race. Lambert rounded out Vanderbilt’s scoring five with a 16th-place finish, running a time of 17:50.2. Mortimer and Phelps were right behind Lambert, placing 17th and 18th, respectively, with times of 17:50.4 and 17:52.1.

Director of cross country and track and field Althea Thomas was pleased with the women’s strong performances up and down the roster.

“They did what they needed to do to secure that second place as a team, from the front to the back,” Thomas said. “It was very good.”

The Commodore men tackled an 8-kilometer race for the first time this season on Friday, and the increased distance appeared to impact their race. Estopinal and fellow senior Nick Laning held their positions in the front pack throughout, finishing second and eighth overall with times of 24:46.7 and 24:56.4.

But fifth-year senior Caleb Van Geffen, senior Jonah Bird, and freshmen Philip Metcalf and Zach Hodges faded in the second half of the race. Van Geffen came in as Vanderbilt’s third runner with a 28th-place finish and a time of 25:45.9. Metcalf followed with a 36th-place finish—still a considerable result for the freshman—and a time of 25:59.1. Bird and Hodges trailed Metcalf, placing 44th and 50th, respectively.

The wide gap between Estopinal and Laning and the rest of the team’s runners was an issue Friday, but Vanderbilt’s attitude remained positive. Estopinal reflected on his race and the team’s performance after the conclusion of the meet.

“It was not quite what I wanted. Obviously, second is good, but you always want the win, especially as my last home meet here,” Estopinal said. “But no, I really can’t complain. I think it went really well. And it seems like everyone else was pretty happy with how their races went as well.”

He also noted that this was the first time running the increased collegiate distance for Metcalf and Hodges, and expected that they would grow more comfortable with more races under their belts.

“We had a couple of young boys, some freshmen in there in their first 8K, and I think they had a really good showing,” Estopinal said. “I think [they] will improve a lot throughout the season.”

The Commodore Classic was an encouraging sign for Vanderbilt that its training is paying off.

“They’ve had some very good sessions,” Thomas said of the runners. “You can see in some of the races—the breakouts in the beginning and the kicks in the end. You know, the ladies and the men, they came in just optimistic and ready to kind of let it loose.”

Estopinal pointed out that the teams didn’t ease up their training before the meet. So, to post the result that they did was all the more impressive.

“We didn’t cut down or go easy for this race,” Estopinal said. “We’ve been training through it.”

Vanderbilt’s next meet is the Joe Piane Invitational, hosted by Notre Dame on Oct. 1. There, the Commodores will compete against a field of schools that includes Alabama, Florida, Kentucky and Ole Miss.