The new executive board of Vanderbilt’s Tau chapter of AEPi reformatted their constitution and have plans to create a Judiciary Board to promote transparency and accountability. 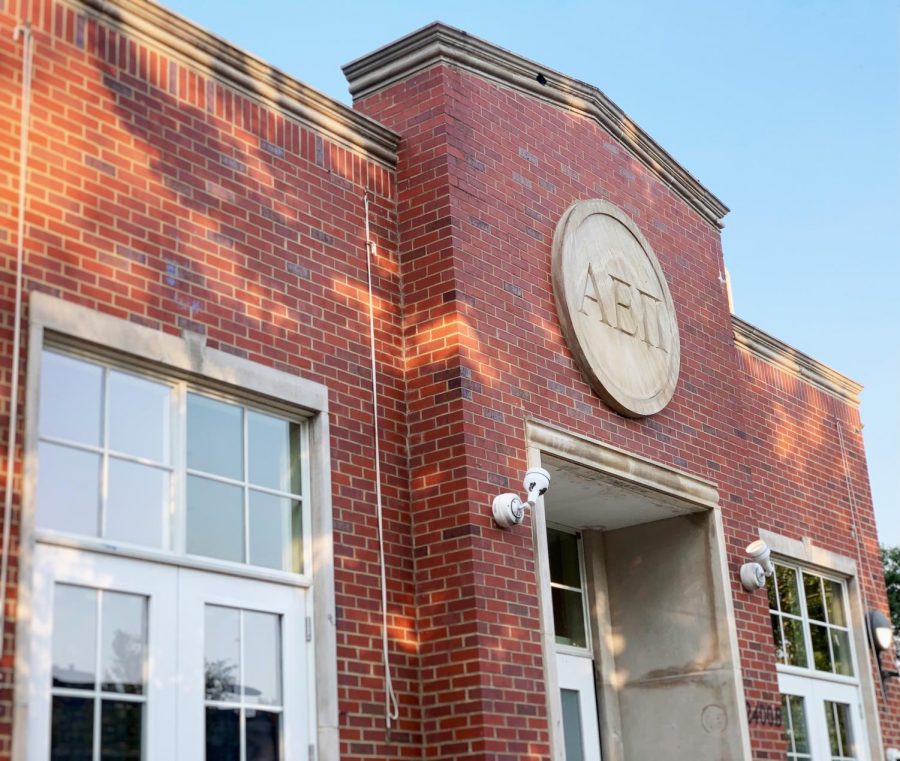 The AEPi House on campus, as photographed on Sept. 19, 2021. (Hustler Multimedia/Noah Srulovitz)

CORRECTION: This story has been corrected to accurately reflect Vanderbilt’s Tau chapter of AEPi’s 2021 awards and the goals of the members.

The Tau chapter of the Jewish fraternity Alpha Epsilon Pi (AEPi) was reinstated on campus in Spring 2021 after being suspended in Spring 2018. From Aug. 30 to Sept. 27, AEPi will participate in Vanderbilt’s Fall 2021 Interfraternity Council (IFC) rush, the organization’s first formal recruitment since its suspension.

In Spring 2021, the AEPi national fraternity conducted virtual recruitment to rebuild the chapter, with the aid of Ivan Aronin, alumni advisor for Vanderbilt’s chapter of AEPi, who has served in his position since 2006. During this period, AEPi inducted 21 “founding fathers”—students who will lead the chapter moving forward.

“Our school has a very big Jewish population, so I found it shocking that we did not have a Jewish fraternity when I came,” founding father and President Jason Kohan, a junior, said. “ I consider being Jewish to be a very big part of me, and I thought that we needed a place that all Jewish students can kind of feel welcome, along with others.”

Kristin Torrey, director of Greek Life, said the founding fathers are working alongside the Office of Greek Life as well as the AEPi national staff and alumni to make sure that AEPi follows all Vanderbilt Greek community and AEPi national guidelines.

According to Torrey, the original AEPi chapter was suspended through a collaborative agreement between the national fraternity and the university, as a result of hazing and risk management violations. The agreement outlined that AEPi could return in Spring 2021 and move back into their house in Fall 2021 after all prior members of AEPi had graduated.

Per Aronin, the former AEPi chapter received numerous alcohol use violations and did not engage in a recommended philanthropy project. Aronin stated that, from 2006 to 2018, he forwarded approximately eight hazing allegations to the Office of Greek Life.

Founding father and Vice President Noah Srulovitz, a sophomore, collaborated with AEPi advisers to rework the fraternity’s operations this upcoming year. Srulovitz is a staff photographer for The Hustler’s Multimedia section.

“We did a lot of work collaborating with the chapter advisers, determining what the structure is going to be like, what the purpose of [AEPi] is and how are we going to build it in a way that we don’t fall into the same mistakes as last time,” Srulovitz said.

One example of these changes is the chapter’s constitution, which Srulovitz said has been completely rewritten in light of their re-established goals and expectations as they rejoin campus.

“We based it [the constitution] on the structure of the general AEPi constitution and then changed sections and the preamble and all the different structures just to fit what we were going for in terms of promoting different levels of social equality, financial inclusivity and trying to make sure that anyone who wants to join can join,” Srulovitz said. “It’s built in a way that it’s going to last and actually promote something productive.”

“This group seems to be much more interested in presenting a positive image for the fraternity [and] working with the Greek Life Office to follow its programs,” Aronin said. “They certainly made a quick impression on the national office of the fraternity.”

Aronin and Kohan said that AEPi leaders are engaging the chapter in training to prevent hazing and are having a liaison with Project SAFE.

“We’ve made a Judicial Board to deal with any accusations or anything that comes up,” Kohan said. “If there is an accusation, the brother will immediately be put on probation and have a fraternity hearing as well. If things do come out as true, they will be removed as a brother, no questions asked.”

Per Kohan, the fraternity has been trying to incorporate Shabbat into their rush activities, given that AEPi is a traditionally Jewish fraternity. Events have included Shabbat dinners on Friday nights, celebrations for Rosh Hashanah and Yom Kippur and donating handmade sandwiches to local food shelters.

“Our goal is to be impactful in a positive way on the Nashville community,” Kohan said.

“We didn’t think we were going to get as many people as we have, but most of our events have had 20 or more potential rushes and new members,” Kohan said. “We’re expecting to almost double in size by the end of this term, even before freshmen rush.”