Vanderbilt settles for overtime draw in SEC opener against Florida

Despite dominating possession and creating many chances, the Vanderbilt Commodores were held to a scoreless draw in their first conference game against the Florida Gators. 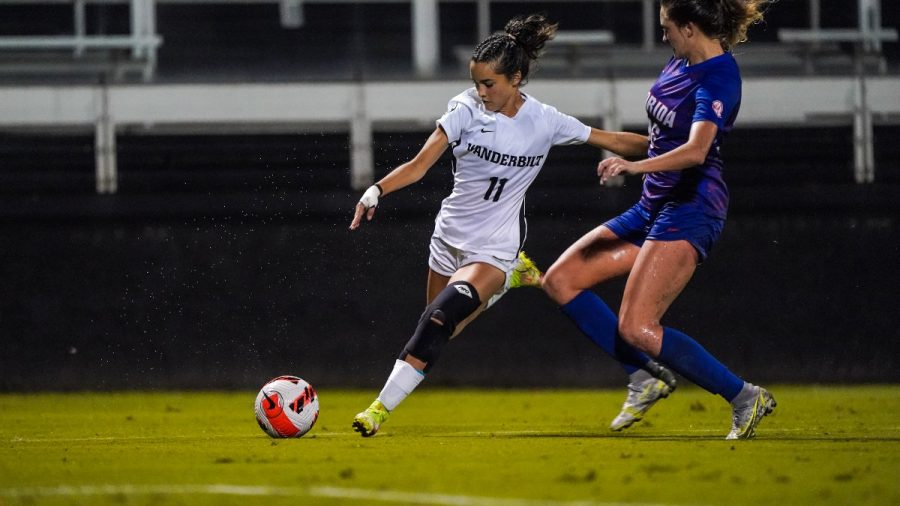 Vanderbilt drew a 0-0 tie in its first SEC game of the season against Florida. (Vanderbilt Athletics).

The Vanderbilt Commodores opened their SEC campaign on a damp Friday night against the Florida Gators with a goalless draw. The Commodores were looking to bounce back from Sunday’s disappointing 2-1 loss to Middle Tennessee State and despite controlling the pace of the game, they were unable to find the key breakthrough.

“I just think today was one of our best performances of the year, and I thought we deserved to win,” head coach Darren Ambrose said. “I don’t think there’s much doubt in my mind that we carried the game.”

While the Gators started the game on the front foot, the Commodores quickly settled in thanks to runs from senior Raegan Kelley and junior Maya Antoine. Within a few minutes of kickoff, the Commodores had their first chance as sophomore Sophia Gorski was on the break, but her shot from ten yards out was deflected wide. Just minutes later, a turnover by the Gators gave graduate Madison Elwell a chance but, similarly, her shot was just off target.

Florida looked to have a promising through ball in the 17th minute for Kit Loferski, but Vanderbilt’s sophomore goalkeeper Kate Devine beat her to it. While the tide seemed to be turning in the Gators’ favor, a shot from Kelley and a long-range chip by senior Ella Shamburger almost beat Florida keeper Alexa Goldberg.

That was followed in the 33rd minute by a shot from sophomore Abi Brighton that flew just over the bar. Florida had three shots on goal in the first half, but they were all routine saves for Devine. The Commodores created several good chances in the first 45, but they were unable to break through and the game remained level at halftime.

The Commodores remained in control to start the second period and an attempted counter from the Gators was snuffed out by Shamburger. Five minutes later, a cross from the right flank led to a chaotic goal-line scramble and shot by Brighton before Florida was eventually able to clear.

With five minutes to go, yet another goal-line scramble resulted from an Elwell corner, but the ball stayed out. Against the run of play, a chance developed for Florida’s Kouri Peace, but  Antoine recovered in time to defend it. The Commodores outshot the Gators 18-7 in regulation with nine shots on goal and ten corners, but the visitors were able to force overtime.

“I thought they defended superbly. [Florida has] two really quick kids up front. I thought we handled them as anyone could handle them,” Ambrose said of the Commodore back line.

The first minutes of extra time were more rigid than the end of the second half, with neither side wanting to concede the golden goal. The ball did end up spending most of the first overtime period in the Vanderbilt half, but the Commodores started the final ten-minute period stronger, with Kelley pulling a shot just wide in the 102nd minute. Another challenge by Antoine prevented a late Florida chance. Freshman Addie Porter offered one last opportunity, but Florida managed to clear it as time expired.

The Commodores outshot the Gators 19-8 overall, but were held to a disappointing scoreless draw in the end.

“It’s not a finite process. You never go get there and say, ‘oh, we’ve arrived.’ You do it every week,” Ambrose added.

The Commodores return to the field on Sept. 23, when they’ll visit the South Carolina Gamecocks in search of their first SEC win of the new season.