The Commodores will look to improve their overall record in SEC play in preparation for post-season tournaments. 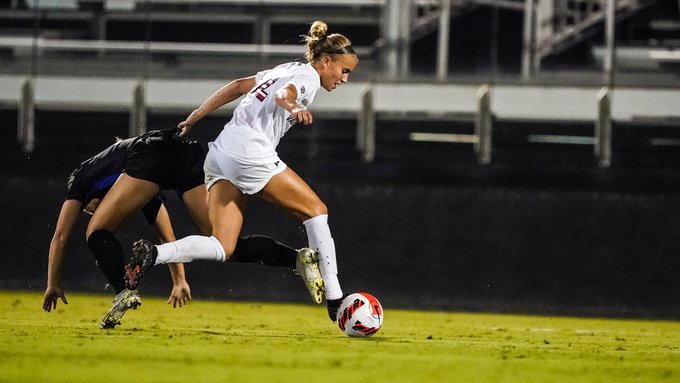 Darren Ambrose's team will kick off SEC play this Friday against Florida at the Vanderbilt Soccer Complex. (Vanderbilt Athletics).

The Vanderbilt women’s soccer team has begun its season. Through eight games, head coach Darren Ambrose’s team has amassed a 3-4-1 record. This year’s roster features a number of underclassmen—17 out of the 32 players rostered are freshmen or sophomores. With more than half the team consisting of underclassmen, the Commodores boast a unique blend of experience and youth on the field.

The Commodores are hungry to improve their 9-6-1 record from the 2020 season and climb the NCAA women’s soccer rankings. Two exhibition games were held in preparation for their official competition, which began with a home-opening overtime win on Aug. 19 against Tennessee Tech.

The out-of-conference competition has also consisted of a 2-0 loss to Duke and a crushing 2-1 Senior Night loss to Middle Tennessee. Nonetheless, the Commodores are fired up to start their SEC season and will try to capture their second consecutive SEC Tournament championship title. Vanderbilt is currently ranked No. 33 by the NCAA and will face two top ten teams during their SEC slate.
Florida Gators: Sept. 17
The Commodores’ first SEC opponent will be the University of Florida on Sept. 17. In their 2020 match against the Gators, the Commodores came out on top with a double-overtime 2-1 win. The Commodores will return all their notable players from that match, such as senior forward Raegan Kelley, sophomore midfielder Abi Brighton and graduate defender Myra Konte, who scored the overtime goal in 2020 at Gainesville.

Last season, the lone goal for the Gators was scored by sophomore forward Maddy Rhodes. However, Rhodes has yet to tally any goals for the Gators this season.

Florida has not been a very high-scoring team this season, but graduate forward Kit Loferski is currently leading the team with three goals. Junior forward Alivia Gonzalez is another player to watch. She holds the second most points for Florida but boasts only one goal against FGCU and an assist against Florida State.

The Gators currently have a 1-5-1 record and will take that record into the matchup with the Commodores on Sept. 17.
No. 5 Arkansas Razorbacks: Oct. 10
As of now, the highest-ranked SEC team Vanderbilt will face is No. 5 Arkansas, who they beat 3-1 in the SEC Tournament in 2020.

The Commodores last played the Razorbacks in 2020 in the SEC Tournament championship to capture their first league tournament title since 1994. After facing a 1-0 deficit, Vanderbilt retaliated with three goals from junior forward Kimya Raietparvar, Kelley and Brighton—all of whom are returning for the 2021 season.

The Razorbacks will return both senior midfielder Kayla McKeon and junior forward Anna Podojil. In 2020, McKeon was named to the All-SEC Second Team while Podojil was named to the United Soccer Coaches All-American First Team. The lone goal for the Razorbacks during their 2020 matchup with the Commodores was scored early in the game by McKeon and assisted by Podojil.

The Razorbacks currently have a 4-2-0 overall record and Podojil leads the team in points with three goals and one assist. Senior forward Parker Goins is shortly behind with six points from two goals and two assists.
Tennessee: Oct. 21
While the Vols are not highly ranked, they currently boast a 7-0-0 undefeated record. Despite losing 2-1 at Tennessee in overtime during an early September match in 2020, the Commodores defeated the Vols 4-2 during the SEC tournament quarterfinals.

The two goals scored by the Vols were from returning senior forward Mackenzie George. The Lincoln, California, native was recognized as the 2018 Big West Freshman of the Year at Cal Poly and more recently was named to the 2020 All-SEC Second Team after transferring to Tennessee.

Tennessee returns nine starters from the 2020-2021 season, including fifth-year senior defender Wrenne French and sophomore forward Jaida Thomas. French will lead the defense with 60 games under her belt and Thomas, the four-time SEC Freshman of the Week, will look to continue pacing the SEC in goals this season, as she already has three.

The Commodores will face Tennessee in Nashville at 7:00 p.m. CDT on Oct. 21.
No. 6 Texas A&M: Oct. 24
This season Vanderbilt will travel to College Station to play Texas A&M on Oct. 24 at 3 p.m. During the 2020 SEC tournament semifinal match, the Commodores beat the Aggies 3-1. Texas A&M currently holds a 4-2-1 record prior to the start of SEC play.

Former Commodore forward Haley Hopkins was one of Vanderbilt’s power players in this match and graduated last spring. After Vanderbilt’s first goal by Hopkins, Aggie midfielder Kate Colvin responded. Returner Kelley scored the third and final goal of the match for the Commodores and was assisted by returning senior forward Olivia Simmons.

Texas A&M shared the first-place spot in the SEC Preseason Coaches’ Poll with Arkansas. The Aggies will return two key defenders: senior Karlina Sample—the SEC Co-Defender of the Year in 2020—and junior Katie Smith, who was an SEC All-Freshman in 2019.

Besides these key matchups, the Commodores will face a number of other teams hot on the NCAA radar. The Commodores SEC regular season will conclude on Oct. 28 and the postseason will commence at the SEC Tournament in Orange Beach, Alabama, on Oct. 31.