Students were evacuated and some were placed in a hotel on Sept. 14 after the sprinkler system was set off on the fifth floor of Gillette House and caused building-wide flooding. 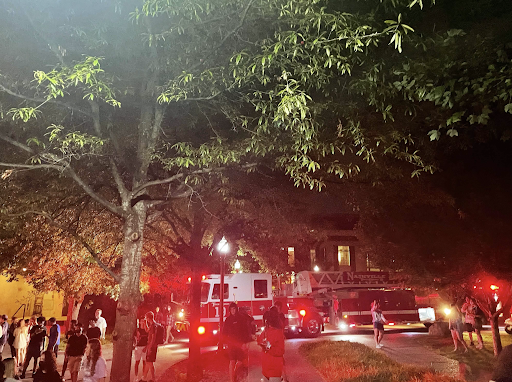 UPDATED: This piece was updated at 12:44 p.m. CDT on Sept. 16 to include information included in a Sept. 15 email from the Office of Housing and Residential Education (OHARE) to Gillette residents.

UPDATED: This piece was updated at 7:19 p.m. CDT on Sept. 15 to include information regarding the number of students displaced to Hayes Street Hotel.

CORRECTION: This story has been corrected to more accurately reflect the contents of a video obtained by The Hustler and to correct information regarding the cause of the microwave fire.

At around 11:30 p.m. CDT on Sept. 14, residents of Gillette House were evacuated after the fire sprinkler system was set off and flooded the building.

A university representative said the cause of the sprinklers being set off is still being investigated. However, The Hustler obtained a video from first-year Libby Oliver of what appears to be a fire as visible through a Gillette window. First-year Jeremy Tallon similarly said that a microwave fire occurred in Gillette potentially as a result of the water from the sprinklers.

The sprinklers started on the fifth floor which caused the water to flood one of the stairwells and seep into the floors below.

“I’d say about 60 percent of the fifth floor is flooded, five rooms on the fourth floor, and somehow the second floor is really bad,” first-year Ashton Monk said.

According to first-year and Gillette fifth-floor resident Aiden Rutman, the worst water damage started at the elevator, near room 533, and continued down the fifth-floor hallway.

“When we got back in the building to grab our stuff [on the fifth floor], they were really worried about fires starting because the outlets hadn’t been turned off and the water was everywhere,” Rutman said.

Immediately after the fire alarms sounded and the sprinklers began spraying, all Gillette residents were evacuated and gathered in the Commons Center. Students were instructed to stay in place so that a headcount could be taken prior to them being dismissed floor by floor to check the condition of their rooms.

“When we went back to Gillette to inspect the damage to our dorms and to bag our personal belongings, we had to be accompanied by an RA because it was hazardous and one of the stairwells was completely flooded,” Rutman said. “There were plastic bags so that we could send any wet clothes to the dry-cleaners to prevent mold damage.”

Randy Tarkington, senior director of residential experience, told Gillette residents in the Commons Center that they would be sent to the Hayes Street Hotel if their rooms weren’t livable. A university representative said 18 Gillette rooms had water intrusion and 44 students were displaced to Hayes Street Hotel.

“There are 17 reserved rooms in the [Hayes Street] Hotel that are already paid for because of COVID-19,” Tarkington said.

In an email obtained by The Hustler sent to Gillette residents at 1:49 p.m. CDT on Sept. 15, OHARE reported an air conditioning outage in Gillette House. The email did not specify if this malfunction is related to the flooding.

“We have identified the cause and are actively repairing the issue,” the email reads. Gillette residents with habitable rooms were allowed back into their dorm rooms at approximately 1:45 a.m. CDT after the Fire Marshall cleared the building. All residents had the option to “bag and tag” items to be sent to the dry-cleaners at no cost.

A university representative stated in an email to The Hustler that Plant Operations estimates that displaced students will remain in the Hayes Street Hotel for around two to three days. According to first-year Riley Callen, an OHARE representative at the hotel told her that the earliest time students in the hotel would be returning to Gillette would be in the late afternoon or evening on Sept. 15.

In an email obtained by The Hustler sent to Gillette residents at 4:20 p.m. CDT on Sept. 15, the timeframe for their return to Gillette House is still being developed. Displaced residents are receiving nightly-reset $25 Commodore Cash stipends until they return to their dorms to order dinner from GrubHub.

Another email obtained by The Hustler sent to Gillette residents from OHARE at 9:17 a.m. CDT on Sept. 15 stated that more information would be forthcoming regarding the submission of insurance claims for any damage.

“If you have an urgent need or concern for an item in your room (i.e. medication, documentation/passport, records) please let the OHARE staff member [in the Hayes Street Hotel] know and we will determine next steps,” the email reads.

The first email to Gillette residents said that a shuttle will be running from 7:30 a.m. CDT to 9 p.m. CDT on Sept. 16 with stops at the Hayes Street Hotel, Gillette Circle and Kirkland Circle to transport students to campus. Free transportation services outside these hours are also available to students who call VUPD, according to the email.

The second email also stated that academic deans have been notified of the incident, but that students should directly communicate with their professors about any needed accommodations.