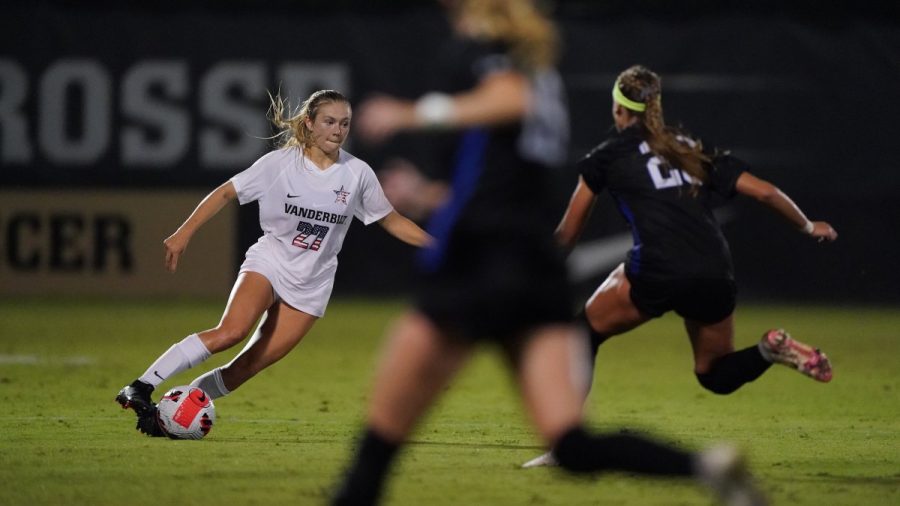 The Vanderbilt Commodores hosted the Middle Tennessee State Blue Raiders Sunday night in their final game before the SEC season starts on Friday. Vanderbilt had lost three of their past four games before beating Lipscomb 2-0 on Thursday, while MTSU entered the contest with a record of 3-3-1, playing in a number of close games. Vanderbilt had won the five previous meetings with the Blue Raiders, but they still proved to be a tough test as the Commodores were defeated 2-1 thanks to a goal in the 87th minute.

The game started at a pedestrian pace, as both teams focused on possession and felt each other out. The possession was fairly equal through the first 10 minutes, as the Blue Raiders generated the only chance after a Commodore giveaway in the midfield. Middle Tennessee striker Kirstine Lykke slipped through on goal with a ball that split center backs Ella Shamburger and Maya Antoine, but missed her shot wide right.

As the game progressed the Blue Raiders began to take control and maintain possession in the Vanderbilt half, although the Commodores were able to muster their first shot of the game in the 13th minute on a counter-attack.

From there the game turned into a defensive struggle, with the teams trading corners in the 20th and 21st minutes, but neither yielding a scoring opportunity. Substitutes Rachel Deresky and Peyton Cutshall made an impact with pace on the wings, helping Vanderbilt take control at the end of the half.

At the end of the first half, MTSU had six shots on goal with three on target, while Vanderbilt had three shots on goal with two on target. The Commodores managed to contain Blue Raiders’ star midfielder Peyton DePriest, who did not make much of an impact aside from one long run that looked to be a breakaway before Antoine caught up and prevented it.  Neither goalkeeper was really challenged, but as the second half started both teams were eager to break through.

“We need to play higher to stop [Middle Tennessee] from playing out and force them to play bigger,” head coach Darren Ambrose told his midfield at halftime.

Vanderbilt started the second half on the front foot and capitalized early on in the 49th minute with an audacious behind-the-leg flick from freshman midfielder Deresky off of a cross from Madison Elwell. The Commodores continued to push on as forward Sophia Gorsky had a pair of chances to double the lead from in tight, but she flicked an open header just past the far post and hit goalkeeper Hannah Suder in the chest from inside the six-yard box.

The Blue Raiders had their backs against the wall and Vanderbilt’s pressure was unrelenting. Deresky had a chance to grab a brace in the 60th minute but her left-footed shot from just inside the box sailed over the goal.

As the half continued, the Commodores started to show signs of fatigue. In the 68th minute, DePriest worked her way behind the left side of the Commodore defense and slipped the ball through Devine’s legs for an unassisted goal. DePriest had played the entire first half as an attacking midfielder, but when striker Lykke got subbed out in the 60th minute, she moved up to striker, a position change that evidently worked for the Blue Raiders.

The game evened out after the MTSU equalizer. Then, after a Vanderbilt corner, the Blue Raiders launched a counter-attack and had a four-on-three driving into the final third. After getting the ball out wide, substitute Taylor Hamlett crossed the ball onto the head of DePriest, who nodded it back across goal and into the back of the net.

“We talked about some things we didn’t want to do and unfortunately we did them,” Ambrose said when asked about DePriest. “They’ve got one special player, who’s conference player of the year, who hurt us. We knew how to deal with her, and we dealt with her for all but two minutes and she scored two goals.”

Vanderbilt tried to equalized but was unable to score in the final three minutes, and the game ended 2-1 in favor of Middle Tennessee. Although Vanderbilt outshot the Blue Raiders 12 to four and racked up nearly 60 percent of possession in the second half, the Commodores were unable to get the result they wanted.

“We had most of the game in the second half,” Ambrose said. “The quality in the final third was not as good as it could have been.”

The Commodores will look to get back on track in their first SEC game, on Friday evening at 7 p.m. CDT against a very talented Florida Gator team.