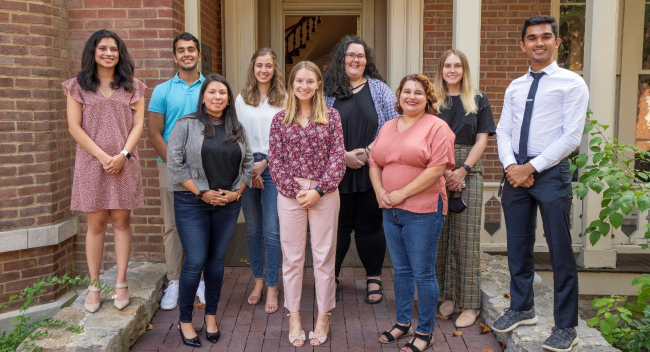 The award winners of the inaugural Excellence in Podcasting Competition, as photographed on Aug. 24, 2021. (Vanderbilt)

On Aug. 24, the Robert Penn Warren Center for the Humanities (RPW) held a reception for the award winners of Vanderbilt’s inaugural Excellence in Podcasting Competition. The competition featured podcasts produced by students across the university.

The competition was created through a collaboration between Director of RPW Holly Tucker, Director of the Center for Teaching (CFT) Derek Bruff and Director of the Office of Immersion Resources Carolyn Floyd. Per Tucker, the three offices worked together to fund and coordinate the awards as well as form a committee to evaluate the submissions.

“We were blown away by the diversity of topics, approaches and overall quality of all of the submissions,” Tucker said.

Prizes were awarded in two categories, separating undergraduate students from graduate and professional students. The two first-place projects received $500 and the five runner-ups received $250. A total of 26 students, 18 undergraduates and eight graduates, applied for the competition, per RPW Administrative Assistant Mary Gray Lindstrom. Winning submissions will also be featured in the upcoming season of VandyVox, a production from the CFT and Vanderbilt Student Media that features student-produced audio, including audio documentaries, radio dramas, spoken word essays and ongoing podcasts.

First place: How Real is Silicon-based Life? by Nicole Kendrick and Natalie Wallace

Runner-ups: My Humanities Moment: Children’s Experiences and Voices in Social Research and Literature by Eugenia Zavaleta Lemus and Going Viral: Basics of Epidemiology by Pranoti Pradhan and Saimrunali Dadigala

The competition took place during Spring 2021 and accepted applications until May 17. Krishnan said that while the application process was simple, creating the podcast itself was not an easy task. Krishnan is the College Voices Executive Producer for The Hustler.

“If you want to seriously be considered, you need to submit something that is compelling but also technically adept,” Krishnan said.

Fagan elaborated that creating a podcast is a multiple-step process, including research, conducting interviews, recording audio and finding free open source sound effects to use.

“It was almost like writing an essay but a lot less formal,” Fagan said.

The winners were notified in July 2021 and invited to the winners’ reception. All of the award winners spoke of their appreciation for the conversations they were able to have with the other winners and the committee members involved in facilitating the competition.

“It was an insane amount of audio talent that was on Vanderbilt’s campus,” Kendrick said. “I am really excited to hear all their podcasts after talking about it with them.”

In his podcast, Gharakhan discusses the PRISM program discovered by Edward Snowden. He talks about what it is, how it was found and the implications behind the program. Gharekhan said he appreciated how creating the podcast forced him to ask questions about aspects of life that often get taken for granted.

Fagan’s podcast discusses noise pollution, its effects on human health, such as sleep, learning and heart conditions, while also considering the effects of the COVID-19 pandemic on noise pollution. Fagan said that she enjoys how podcasts allow the person being interviewed to speak in their own voice.

“I thought it would be fun to incorporate personal experience from where I lived sophomore year because I remember being woken up by the garbage truck at three in the morning,” Fagan said.

“When you listen to the podcast, it [gene drives] becomes less scary because you start to understand it and listen to scientists talk about it,” Pembridge said. “It becomes more manageable in your mind, and that was my goal.”

Lemus, whose podcast was centered around anthropology, said that her podcast was initially created for an assignment that was part of a program in the National Humanities Center.

“The assignment was to write or do a creative piece about something from the humanities that stands out for you,” Zavaleta said. “It could be a song, a symphony, a painting, something artistic [or] cultural; anything that provoked you to dedicate your life to the humanities.”

Zavaleta said that her podcast expands on her interest in human interaction, specifically interactions with and between children. She added that she enjoys how the podcast format allows her academic research to reach an audience that is not accustomed to academic language. Zavaleta said she plans to continue making podcasts as a way to collaborate with others about anthropology.

Krishnan and Tilton—Programming Director of The Hustler—discussed academic burn-out during the Spring 2021 semester in their podcast. Krishnan said that many students were facing difficulties due to social isolation and the lack of activities that would typically serve as a reprieve from academics.

“We heard some really riveting stories,” Krishnan said. “People were feeling guilty for exercising, even though that is generally a good thing to do because they didn’t feel that they were being stereotypically productive.”

Kendrick and Wallace’s podcast delves into scientific communication. Their podcast discusses if the science within TV shows and movies are realistic.

“Getting good science communication out there is extremely important,” Kendrick said. “You want to do something that is coming to [the audience’s] level, isn’t dumbing it down, but is still telling a well-researched truth.”

Pradhan explained that she wanted to create a podcast to teach listeners about epidemiology. She said the first season of the podcast focuses on the general concept of epidemiology, while the second season features comments from experts in the field.

“What is the point of teaching only other scientists and researchers about your research?” Pradhan said. “You should be able to convey your research to the public.”

Like many of the winners, Pradhan plans to continue her podcast in the future. She is currently working with Dadigala to produce a third season of her podcast.

Vanderbilt plans to continue the Excellence in Podcasting Competition in the future. Per Tucker, the committee will reevaluate the structure of the competition, as it was quickly put together while in the depths of the COVID-19 pandemic.