The Commodores will look to get their first win of the season and snap an 11-game losing streak this Saturday. 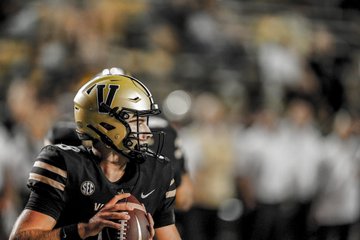 Vanderbilt will look to bounce back in week two against Colorado State after a week one loss to ETSU. (Vanderbilt Athletics).

Following an embarrassing blowout loss to start the Clark Lea era, the Vanderbilt Commodores will look to get their first win of the season on Saturday night at 9 p.m. CDT against the Colorado State Rams. The Commodores will also be looking to snap an 11-game losing streak that extends back to November 2019.

Much like Vanderbilt, the Rams suffered a near 20-point loss to kick off their 2021 campaign, falling at home to South Dakota State 42-23. Needless to say, both sides will be looking to right the ship and get in the win column. Here are three matchups to key in on for this Saturday’s matchup.
Vanderbilt O-line vs. Colorado State Front Seven
The Commodores could not get much of anything going offensively against ETSU, but the running game in particular struggled to get much traction. Re’Mahn Davis mustered just 58 yards on 15 carries and the team as a whole managed only 2.7 yards per carry. The Vanderbilt offensive line only gave up two sacks, but struggled mightily dealing with interior penetration and opening running lanes last Saturday. On a night where Ken Seals looked uninspiring from the opening snap, the Commodores could not establish the run, leading to their disastrous offensive performance.

On the flip side, the Colorado State defense was extremely susceptible to the run in their opening week loss to South Dakota State. The SDSU running back duo of Pierre Strong and Isaiah Davis took control of the game, combining for 222 yards and three touchdowns as the team ran for an unbelievable 7.1 yards per carry on the Colorado State defense. There lies an obvious hole for the Commodores to exploit in the heart of the Colorado State defense. Conversely, Colorado State also has the ability to stifle the ground game and make the Commodores one-dimensional by stopping a running attack which ranked a measly 115th in the FBS in rushing yards per game last year. The battle in the trenches should set the tempo in this game early and will be a major factor in the end result.
Ken Seals vs. the Colorado State secondary
Following last week’s blowout loss, it should not come as a surprise that the Commodores need significantly better quarterback play from their sophomore signal caller. Seals finished Week One with zero touchdowns, three turnovers (including this miscue that led to a scoop-and-score) and a 6.0 QBR against the FCS competition. While part of the struggles can be attributed to very poor protection in front of him, Seals looked entirely out of rhythm all night and was consistently inaccurate on his passing attempts. While part of the trouble in finding his rhythm can be explained by the Vanderbilt coaching staff’s questionable decision to nearly alternate possessions with Seals and Mike Wright, Seals did not look confident in the pocket and failed to command the offense. Looking across the line of scrimmage, Colorado State fielded a below-average passing defense last year and lost multiple starters in their secondary. With a very manageable matchup in front of him, the Commodores need Seals to step up and build off of the promise he showed last year as a freshman starter.
Todd Centeio vs. Vanderbilt defense
While Colorado State quarterback Todd Centeio has not been a career starter, entering his fifth year in the program, he certainly has the experience needed to win at the FBS level. This experience showed last Saturday where, despite the loss, he threw for over 300 yards with a touchdown and no turnovers. While not an elite-level playmaker, Centeio can certainly take advantage of a young secondary, much like the defensive backfield Vanderbilt is currently playing. The Commodores limited ETSU quarterback Tyler Riddell to just 135 yards, but struggled mightily defending the pass last year, ranking 118th in the FBS. A suffocating pass defense on Saturday night would surely help Vanderbilt slow down the Rams’ offense and pull away with an upset victory.

While the season did not start off ideally for the Commodores, there remains plenty of promise on this roster to turn it around. With a strong showing in the trenches and a much-needed bounce-back game from Ken Seals, Vanderbilt can certainly keep this game tight and potentially get in the win column for the first time since 2019.