Strong performances from the Commodore freshmen highlighted the season-opening meet. 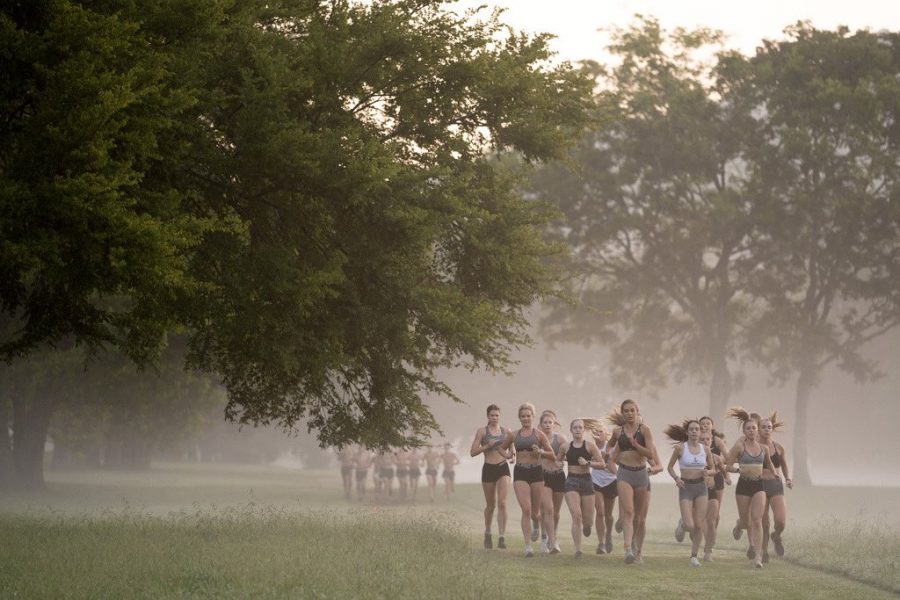 The Vanderbilt cross-country team got its season underway this past weekend at the Mizzou Opener. (Vanderbilt Athletics).

Vanderbilt’s women’s and men’s cross-country teams competed in their first meet of the season Friday at the Mizzou Opener in Columbia, Missouri. The Commodores ran against Arkansas, Kentucky and Missouri at the site that will play host to the 2021 SEC Championships, allowing the teams to get a preview of the course before the late October championship meet.

Senior Grace Jensen ran a time of 17:21.2 to finish eighth overall in the women’s 5-kilometer race, while graduate transfer McKenzie Yanek ran 17:36.2 to place 14th. Led by Jensen and Yanek, the Vanderbilt women placed third, finishing just behind second-place Missouri. Arkansas dominated the event, with Razorback runners serving as the first seven finishers to lead the school to a perfect team score of 15.

Seniors Matthew Estopinal and Nick Laning ran times of 18:19.7 and 18:29.7 to place 15th and 18th overall, respectively, in the men’s 6-kilometer race. Estopinal and Laning were the top runners for the Commodore men, who finished in a distant fourth behind Arkansas. The Razorbacks narrowly fell short of beating second-place Missouri, while Kentucky won the meet comfortably.

Though the collective performance of the Vanderbilt women and men appeared underwhelming on paper, the teams had a successful meet, according to director of cross country and track and field Althea Thomas. She cited the Commodores’ adherence to their controlled approach to the race as a positive takeaway.

“Some of the strategy was running at a particular pace and not just running emotionally,” Thomas said. “So, I think it went very well. [The runners] did a very, very good job believing in the plan and executing the plan. And it showed us some good things about the athletes.”

Estopinal agreed with his coach’s evaluation and suggested that the meet provided Vanderbilt with early-season encouragement.

“This [was] sort of a weird take on a meet, where we were sort of doing it as a workout,” Estopinal said. “So everyone ran it, and rather than going all out, everyone felt very comfortable. And it was a confidence boost for everyone [to be] able to do what we did, and know that we have so much more [energy available].”

The race wasn’t just a strong leading step for the student-athletes—it was meaningful for the coach as well. The Mizzou Opener was the Commodores’ first meet under Thomas, who has big visions for the future of the program. After the meet, she reflected on what it meant to her and expressed her appreciation for the Commodore runners.

“Looking back on it, I think it is very important to me and I’m really excited about how it went,” Thomas said of the meet. “I couldn’t ask for a better group of athletes to do it. They’ve just been so open and welcoming since I got here—open to anything that would change, excited about anything that has stayed the same. And they’ve just been amazing people—not just athletes.”

Another one of Friday’s highlights was the performance of the Commodore freshmen, as Vanderbilt’s top seven runners included three rookies on both the women’s and men’s sides.

The freshmen women made a strong statement this week amongst the talented competition. Recruited from Dallas, Texas, Cameron Fawcett placed 17th overall and ran a time of 17:41.5. Fawcett placed third amongst her Vanderbilt teammates. Ella Lambert placed 26th and ran a time of 18:08.2, while finishing off the last 2,000 meters strong. Only nine seconds behind Lambert, Julia Rosenberg placed 29th and ran 18:17.8, with a good finish in the final 3,000 meters. The final Vanderbilt women’s freshman entry was Gigi Clifford of Tiburon, California, who ran a time of 18:52.3 to place 39th. There are five freshmen currently rostered, but only four raced. Freshman Emma Curry is from Waxahachie, Texas, and was not present at the meet this past weekend.

Three out of the 11 men’s athletes rostered are freshmen and they are the second-largest class. Metcalf, Niser and Hodges all are sure to make an impression during their first season as a Commodore.

Senior Matthew Estopinal is confident in the ability the freshmen possess this year.

“I think they’re going to have a very big impact,” Estopinal said. “They’re a very, very strong class, and they’re a bunch of good guys. They work really hard in workouts and at practice every day.”

Coach Thomas agrees with Estopinal that the freshmen will contribute a lot to the program.

“I do believe that the freshmen that we have here have come in very hungry,” Thomas said regarding the freshmen’s mentality. “And they’ve come in wanting to be a part of something great.”

The Vanderbilt squads have two weeks of training ahead of them before they host the Commodore Classic at Percy Warner Park on Friday, Sept. 17. The women will run another 5-kilometer course, while the men will tackle an 8-kilometer race for the first time this season. The team has had a great attitude right off the bat, and Estopinal is looking forward to keeping that mentality alive.

“Everyone’s really been motivated lately, and just keeping that up, keeping the ball rolling,” Estopinal said.

While the team is training hard in preparation for the Commodore Classic, their main focus is the SEC Championships that will be held Oct. 29 in Columbia, Missouri. Coach Thomas is confident in her training and athletes, but knows what their sights are set upon.

“Every focus, every week is just ‘what part of the piece are we on?’ to get to that destination,” Thomas said. “That is our ‘why.’ And so, just in the next two weeks, we’re looking for more of the same. It’s the same characteristics, it’s the same mentality.”